The graphics processing specialist appears to have turned the corner with two quarters of sequential increases.

There's been a lot of uncertainty for NVIDIA (NVDA 2.60%) investors in recent months. The maker of graphic processing units (GPUs) became the victim of its own success. After the company produced quarter after quarter and year after year of impressive growth, slowing demand in two of its hottest segments sent the stock plunging late last year, and it ultimately lost more than half its value.

But now the company appears to be on the rebound. For the fiscal 2020 second quarter (which ended July 28, 2019), NVIDIA reported sales of $2.58 billion, down 17% year over year but easily surpassing analysts' consensus estimates of $2.54 billion and management's guidance of $2.55 billion. The bottom-line results were similarly promising, as adjusted earnings per share of $1.24 soared past expectations of $1.14.

Given the low expectations going into the quarterly earnings report, investors breathed a sigh of relief, bidding shares up more than 6%. 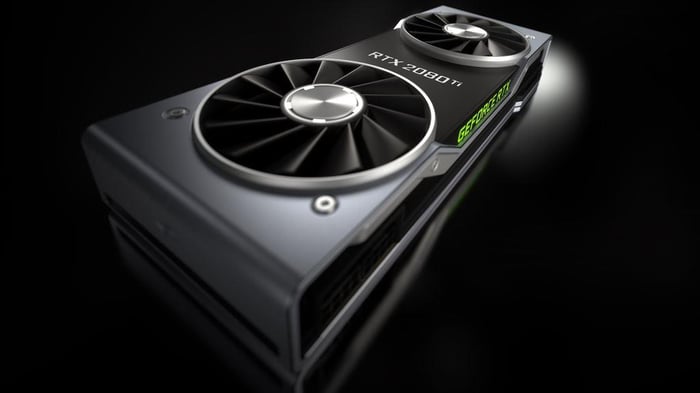 While it might seem counterintuitive to celebrate year-over-year sales declines, it's important to put these results into perspective. NVIDIA posted record sales in the year-ago quarter from its gaming segment, which provides the lion's share of the company's revenue. Additionally, this marked the second sequential quarter of revenue gains after sales fell to levels not seen in more than two years.

Revenue in the gaming segment of $1.31 billion fell 27% year over year, and while it isn't ideal, it does show that the worst may be over. Sales increased for the second consecutive quarter and were up nearly 25% compared to Q1.

The data center segment also faced difficult comps due to the record results in the prior-year quarter, with revenue falling to $655 million, down 14% year over year. Management warned last quarter of a "near term pause in demand from hyper-scale customers," so investors will be watching for that demand to return in upcoming quarters, particularly as this had been the highest-growth segment for NVIDIA, going back more than three years.

Some of the news was even better. Revenue from the auto segment climbed to a record $209 million, up 30% year over year. Additionally, sales in the professional visualization segment eked out gains of 4%, growing to $291 million. The OEM segment, which houses sales of chips used to mine cryptocurrency, declined about 4% year over year, the slowest rate of declines in more than a year.

Given the modest weakening in the OEM segment and the slowing declines in the gaming business, it appears NVIDIA may be well on the way to clearing the supply chain of the excess chips that have plagued the company in recent months. A quick view of the balance sheet shows inventory levels have declined by nearly 24% in the past six months.

On the conference call, NVIDIA CFO Colette Kress spent a significant amount of time laying out the massive opportunity presented by the company's RTX ray-tracing chips -- which were mentioned on the call more than 30 times. The next-generation processors deliver "realistic and lifelike lighting, reflections, and shadows, [and] ray-tracing offers a level of realism far beyond" what was previously possible.

The chips are opening up an intriguing number of potential applications, which could drive the next wave of growth for the company. "NVIDIA RTX technologies has reinvigorated the computer graphics industry by enabling researchers and developers to take a leap in photorealistic rendering, augmented reality, and virtual reality," Kress said.

NVIDIA's outlook was lighter than some expected, but the company has a history of supplying conservative guidance, and given the better-than-expected results this quarter, investors seemed willing to overlook the shortfall. Management is guiding for revenue of $2.9 billion (plus or minus 2%), which would represent a year-over-year decline of about 9%. The company doesn't provide per-share guidance. However, using the current share count of about 616 million and the midpoints of the guidance ranges the company gave for gross margins, operating expenses, and tax rates, adjusted net income should be at about $920 million, resulting in adjusted earnings per share of $1.49.

To put that into the perspective of Wall Street's expectations, analysts' consensus estimates are calling for revenue of $2.97 billion and adjusted earnings per share of $1.52, which would represent declines of 6.7% and 17%, respectively.

It takes more than one quarter to make a trend, but with two sequential quarters of growth under its belt, NVIDIA appears to be on the road to recovery.