Could the emergence of short-form videos shake up the Chinese internet market?

Chinese internet giant Tencent (TCEHY 3.24%) is one of the largest and most formidable companies in the world, yet it's not without competitive threats. Some investors have recently pointed to emerging competitor ByteDance, the company behind the popular Toutiao news aggregation app and TikTok, the hit app that allows users to create short, fun videos set to music. ByteDance was formed in 2012 and TikTok came out in 2016, taking China by storm and rocketing to 500 million monthly active users in just two years. That rapid growth has catapulted the currently private ByteDance to a market valuation of roughly $75 billion as of last year.

The emergence of ByteDance has increased competition among China's internet publishers just as the Chinese economy has slowed. That has really punished other internet giants like Baidu, which has posted terrible numbers this year. Competition may have also played a part in the recent deceleration in Tencent's online advertising segment, detailed in its earnings release out this week. 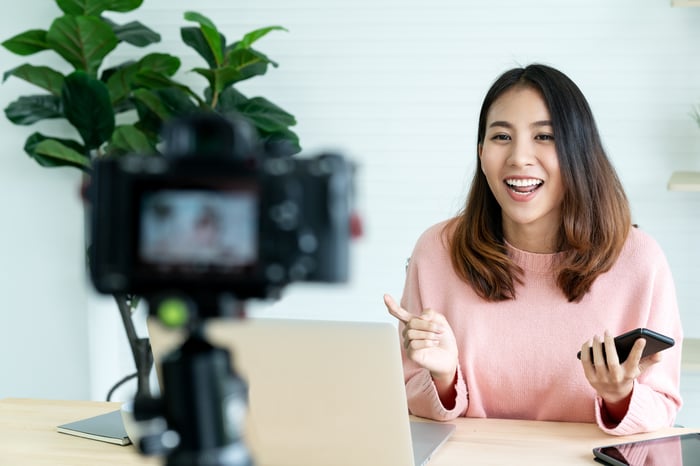 Is ByteDance a threat to Tencent? Image source: Getty Images.

Tencent management obviously knew the TikTok threat was on investors' minds, addressing it early in its conference call with analysts. Off the bat, management made the case for its focus on quality content over user-generated videos:

"Many observers question the role of high-quality content, given the recent boom in user-generated content such as mini videos. We believe high-quality content has enduring and persistent appeal, providing users with education, lifelong bonding experiences, immersion and stimulation in a way that is difficult for short-form user-generated content to match."

What does Tencent mean by "high-quality"? Well, Tencent is one of the leading streaming services in China and a producer of high-end dramas series, akin to a Chinese Netflix. Additionally, Tencent has the advantage of sourcing material from its China Literature publishing house, as well as fictionalized adaptations of popular video games from its myriad game studios. With that kind of in-house intellectual property, Tencent has a competitive advantage in creating hits. This is all in addition to its own original in-house production capabilities.

Also, by virtue of its size and scale, Tencent was able to land an extension its exclusive deal with the NBA, the most-watched professional sports league in China. In fact, since Tencent began streaming NBA games in 2014-2015, Tencent has nearly tripled the Chinese NBA audience as 490 million internet users in China watched one or more games on its platforms.

Though short video may be the theme of the day, Tencent believes users will stick with what they perceive as high-quality, must-have content over the long-term.

2) Short-form is additive, not duplicative

Though I don't doubt Tencent's belief in quality content, I imagine management wouldn't be as sanguine if it were losing eyeballs to TikTok at a rapid rate. And though TikTok has clearly won some market share, Tencent management also noted that its own video platforms increased users and engagement at a healthy rate, even in an uncertain macro environment:

In other words, the growing Chinese mobile internet entertainment ecosystem is not a zero-sum game. It's not unlike what Netflix CEO Reed Hastings once said about Netflix's biggest competition -- that it was not in the form of other streaming platforms, but rather "sleep."

3) Tencent has short videos, too

Though some may not be aware, Tencent actually has its own short- and mini-video platforms across its QQ Kandian entertainment news feed and Weishi mini-video app, in addition to short videos on the ad-supported part of Tencent Video. Management noted that those platforms also grew in engagement in the quarter.

What is interesting is that Tencent is taking its time in promoting its smaller short-video platforms, despite TikTok's ascendance, as it tweaks the experience for users. Management noted:

"We will be building up the technology, the content curation capability as well as the ability for us to target the mini video to the different users through our recommended feed over the long run. And when our engagement and retention have reached our target, we will actually start promoting in a very big way."

Therefore, investors should know that Tencent isn't totally ignoring this part of the streaming video market. It's just taking its time, a luxury afforded by its diversified business model.

Although the headlines might read that Tencent's online advertising "slowed" in the quarter, it was still up 16% overall, which is not bad, and 28% when incorporating only social media and online advertising. "Traditional" video fell 7% but was also lapping last year's World Cup, which is a very tough comparison.

Long-term investors should remember that Tencent has been around for a long time and that its management takes a particularly long-term view, tweaking and optimizing user experiences well before monetization. So while TikTok's short video platform is the flavor of the past year, it seems a good bet that Tencent will eventually be able to adapt its own platforms for future growth.