A drubbing post-earnings makes it look extraordinarily cheap in at least one respect.

Dropbox (DBX 1.15%) might be the market's most mystifying stock. Competition is fierce. Fickle consumers can choose to unplug at any time. And yet there's no disputing that the cloud storage specialist is cheap by the numbers -- and getting cheaper every day. 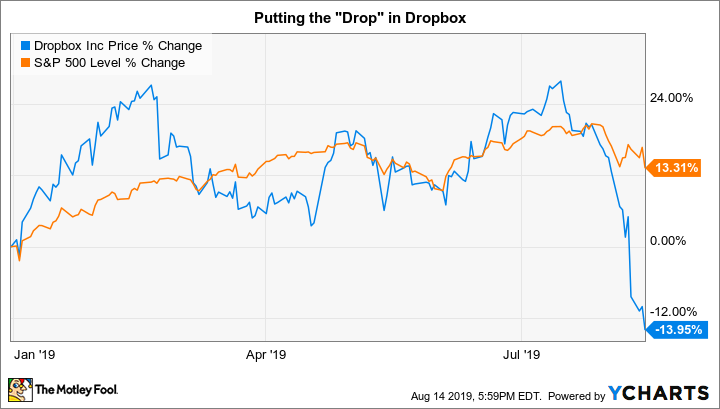 As the chart shows, Dropbox stock has drastically underperformed the market year to date. Aug. 9 brought the latest hit when the shares closed down 12.8% on what seems to be analyst disappointment with billings and deferred revenue.

Dropping through to the bottom line

Today, the company caters to 13.6 million paying users and addresses over 500 million with the free tier of its product. Over 80% use Dropbox storage for work, and the company claims to host over an exabyte -- a billion gigabytes -- of content on its servers, according to its Q2 investor presentation. All those millions of digital files and file folders have resulted in $1.52 billion in revenue over the trailing 12 months -- or roughly $112 per user per year.

Putting these numbers in perspective: Under 3% of Dropbox's installed base of users is paying the tab for the entire business. They're also bringing in a boatload of cash: $336.9 million in annual free cash flow as I write this. For every $112 a user spends for Dropbox annually, $22.77 lands in the company's coffers as new cash. 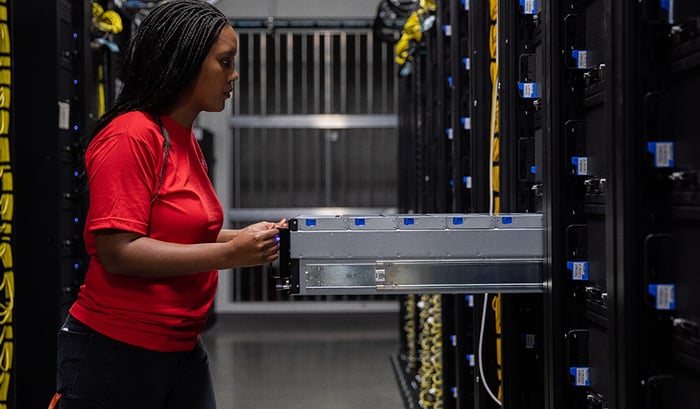 A Dropbox employee working in one of the company's data centers. Image source: Dropbox.

Great as it is to see Dropbox taking in so much cash, it's not the volume of cash the company generates that matters. It's how the company is investing its cash that says the most about the business, and so far there's a lot to like. It has generated a sparkling 30.35% cash flow return on investment (CFROI) over the trailing 12 months.

Calculated by taking the total cash flow from operations -- that is, the real cash money generated from the business -- and dividing it by the sum of total assets minus current liabilities (also known as "capital employed"), CFROI gives a realistic picture of how management's investments in assets to grow the business pay off over time. At over 33%, Dropbox is squeezing massive value from its investments in data centers and other equipment for serving customers.

Critics will argue that Dropbox generates a large amount of cash from employees' exercising of stock options: $232.2 million in the last year alone. Fair enough. Investing in stock grants isn't the same as investing in capital equipment. (Though I'd argue there's still value to be gained by giving smart people equity, especially if it's their job to provide a superior experience to customers.) Strip out all that money that options contribute to operating cash flow, and CFROI drops by more than half to a still-excellent 14.47%.

Think about it this way: While Dropbox could easily invest capital in bank deposits that pay not even 3% interest, the company has instead chosen to reinvest in itself and is earning exceptional rates of return as a result. That's a really good sign, especially for a company that's yet to convince 97% of its active users to become customers. Dropbox stock is going on my watch list; I suggest you consider adding it to yours.