Shares in the troubled company are bouncing off their lows.

Shares of Camping World Holdings (CWH -3.52%), the RV retailer, traded up more than 10% on Friday afternoon and are attempting to rebound from all-time lows set in the aftermath of a disappointing earnings report. It's nice to see the stock bouncing off its lows, but this company still has a long journey ahead to get back to where it once was.

Friday's gains reversed a Thursday sell-off that came after Northcoast Research, one of the few remaining Wall Street firms still bullish on the company, lowered its rating to neutral from buy. A number of analysts have downgraded the shares in the week since Camping World reported second-quarter earnings that came in $0.20 per share below expectations and warned that full-year earnings were likely to be short of consensus, as well. 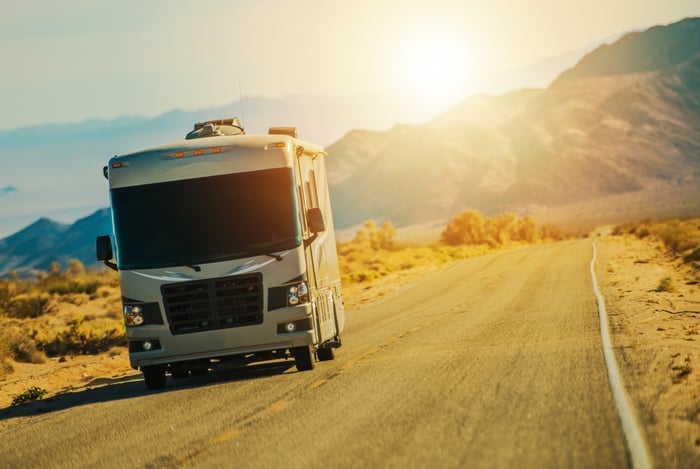 Camping World has faced some company-specific issues, including shareholder lawsuits questioning the company's health, but its broader issue is the result of weakness in the overall RV market. Sales of new vehicles in the quarter were down 6.3% to about 22,900 units, and average selling prices were basically flat.

Investors are now grappling with the growing evidence that there will not be a quick turnaround. CEO Marcus A. Lemonis, a private-equity veteran who is best known as host of CNBC's The Profit, said that a combination of margin compression and increased selling expenses would weigh on future-quarter results.

"As a management team, we've spent considerable time looking at multiple scenarios and have concluded that for purposes for full year 2019 guidance, we must assume that the current market conditions and uncertainties will continue," Lemonis said during a post-earnings call with investors.

After Thursday's sell-off, shares of Camping World had lost nearly 70% of their value over the last year. There may not be a quick and easy turnaround here, but given that all the bad news is priced into the stock, there's at least reason to hope the shares might have bottomed out.

Even if the company has bottomed, there isn't a quick and easy path for Camping World to quickly recover, short of a rapid change in consumer preferences back toward buying RVs. Existing holders with a good deal of patience might want to stay on board for the ride, but there isn't a lot of reason to jump on board a Camping World rally right now.