Nearly 800,000 Americans have a stroke each year. Sadly, about 140,000 of them will pass away from the event. That makes stroke the fifth most common cause of death. These numbers speak volumes about our desperate need for new treatment options.

Silk Road Medical (NASDAQ:SILK), an innovative medical device company that came public in April, is on a mission to greatly reduce the risk of stroke and its devastating impact on society. Here's why it has a great chance at succeeding and could mint its shareholders a fortune in the process.

The vast majority of strokes are classified as "ischemic," which is when blood flow to the brain suddenly becomes blocked. A leading cause of ischemic stroke is carotid artery disease, which is the gradual buildup of plaque in the neck arteries that supply blood to the brain. If that plaque breaks away, it can travel up to the brain and cut off critical blood flow, triggering a stroke. 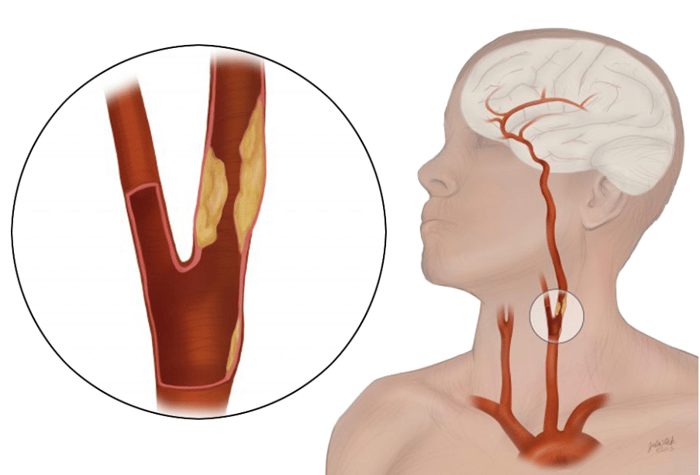 Doctors have known for decades that the best way to treat a stroke is to prevent it from happening in the first place. That's why an invasive surgical procedure called carotid endarterectomy (CEA) was developed in the 1950s. This is when a surgeon opens the neck with a large incision and manually removes the plaque from the artery before it can become dislodged.

While successful CEAs do reduce the risk of stroke over the long term, the procedure itself is very risky. The surgery can accidentally cause plaque to loosen and travel to the heart or brain, which can trigger a heart attack or stroke. The cranial nerve is also at risk of being damaged during the procedure.

These negatives spurred development of a minimally invasive alternative in the 1990s. Called a transfemoral carotid artery stenting (CAS), this process involves placing a stent over the plaque in the artery to keep it from becoming dislodged. Surgeons gain access to the neck by entering through the leg.

While CAS procedures are much less invasive and avoid many of the surgical risks of a CEA, studies have shown that they aren't nearly as effective at lowering the risk of a stroke. As a result, CAS procedures are only performed in a minority of stroke-prevention cases today.

Silk Road Medical believes that it has developed a solution that combines the stroke-reduction benefits of a CEA with the low surgical risk of a CAS. The company calls its new procedure a transcarotid artery revascularization (TCAR).

Here's how a TCAR works: A surgeon starts by making a small incision in the patient's neck to directly access the plaque-filled artery. Then a product called the ENROUTE Transcarotid Neuroprotection System taps into the artery and reverses the flow of blood away from the brain. The blood then passes through a mesh screen that collects the loose plaque, and the filtered blood reenters the body through the leg. Once the dangerous plaque is removed, an ENROUTE stent is placed on top of the remaining plaque to keep it in place. 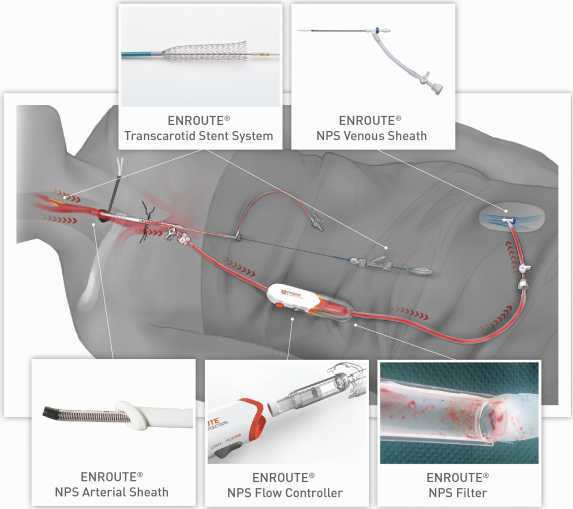 Reversing the flow of blood and filtering it before putting it back into the body means there's very little risk that plaque will accidentally end up in the heart or brain during the procedure. What's more, the ENROUTE stent helps to ensure that the artery remains open and that any new plaque that is created stays in place.

Silk Road has the clinical data to prove that the TCAR procedure is superior to the current standard-of-care treatments. The risk of having a stroke in the 30 days following a TCAR procedure is just 1.4%, which compares very favorably to the 2.3% that is observed with a CEA procedure. A TCAR procedure is also faster to perform, reduces the patient's length of stay, and nearly eliminates the risk of cranial nerve injury. The postsurgery scar is also much, much smaller. 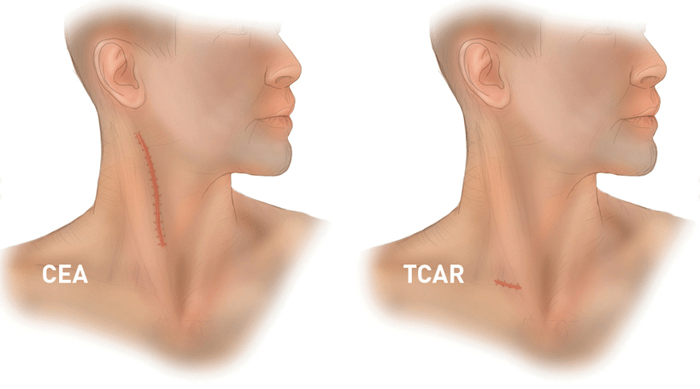 These benefits make it easy to understand why the demand for the TCAR procedure has taken off since it was launched just a few years ago:

About 168,000 carotid revascularization procedures are performed each year in the U.S. Management believes this translates into a $1 billion opportunity, which is a sizable number for a company that is expected to haul in about $62 million in 2019.

But that $1 billion figure could be significantly underselling the company's true potential. That's because 4.3 million people in the U.S. have carotid artery disease, and another 427,000 are diagnosed each year. Since the TCAR procedure is minimally invasive and effective, it could help to significantly grow the demand for carotid revascularization procedures. Management believes that the 427,000 new cases each year translates into a $2.6 billion opportunity.

There is also the potential for label expansion claims. Management believes that its technology could also be useful in treating vascular disease of the heart, aortic arch, and brain. Success in any of these additional indications would significantly expand the company's total addressable market opportunity.

Finally, there's also huge potential for TCAR overseas. Only about 10% of ischemic strokes happen in the U.S. Silk Road already has secured regulatory approval in Europe, but it hasn't begun its international commercialization efforts just yet. The company is actively pursuing regulatory clearance in China and Japan, too.

Silk Road has only been in commercialization mode for a few years, so it's still losing money. However, the overall numbers that we've seen so far look pretty good:

There are several positive takeaways here for investors.

First, procedures and revenue are growing very fast (revenue grew 92% in the second quarter of 2019), which is a clear sign the company's commercialization efforts are working and there is pent-up demand for the product.

Second, Silk Road's gross margin is rising with revenue growth and recently touched 75%. That's a very healthy number, and management believes this number can continue to trend higher over time as the business continues to scale.

Finally, the total net loss looks acceptable, especially when considering that the company's cash balance at the end of June was $118 million. Silk Road also recently added another $189 million to its coffers through a secondary common stock offering.

In other words, Silk Road's numbers make it look as if it has all the financial firepower it needs to eventually reach profitability.

Silk Road Medical was founded in 2007 by Dr. Tony Chou and Jack Lasersohn, both of whom work for healthcare-focused venture capital companies. Both Chou and Lasersohn are active members of the board, though their personal holdings in the company aren't noteworthy. However, the investment firms that they work for currently hold 62% of shares outstanding. That gives them an outsized influence on how the business is run.

Silk Road's corner office is occupied by Erica Rogers, who has been in the medical device industry for decades and has held a variety of executive positions at companies like Medicines360, Nanosys, Allux Medical, Target Therapeutics, and Boston Scientific. She also co-founded a company called Visiogen, which was acquired by Abbott Medical Optics in 2009. She currently owns about 3% of Silk Road's shares outstanding, so her incentives appear to be nicely aligned with those of outside shareholders.

Silk Road Medical is a buy

There are a lot of reasons to be excited about Silk Road Medical today. The company has brought an innovative therapy to market and is already showing commercial success. The growth runway ahead of the business could be enormous, and the company has plenty of cash in the bank to execute against that opportunity.

The only knock that I see against investing in Silk Road Medical right now is that Wall Street has priced this business for continued success. The stock currently trades at more than 25 times trailing sales, so if the company fails to deliver against its ambitious growth targets, shares could get whacked.

Despite that risk, I think this is a fascinating growth stock and that the company has a very bright future ahead. That's why my personal plan is to nibble on the stock today when the Fool's trading rules allow and follow the company with great interest.

Could This Stroke-Prevention Specialist Be the Next Great Growth Stock? @themotleyfool #stocks $SILK $BSX Next Article
Current