Please ensure Javascript is enabled for purposes of website accessibility
Log In Help Join The Motley Fool
Free Article Join Over 1 Million Premium Members And Get More In-Depth Stock Guidance and Research
By Rich Duprey – Aug 19, 2019 at 10:31AM

There will be a regular rotating theme of high-end restaurants the credit card issuer features.

The intent is to take experiential marketing to a wholly different plane by fully immersing cardholders in dining experiences that replicate the smallest details of three famous world-class restaurants -- The Rock, in Zanzibar, Tunisia; Teruzushi, in Kitakyushu, Japan; and the Lyaness bar, in London -- while filling the senses with the sights, sounds, and smells from each restaurant.

Of course, guests should be prepared to pay with either a Mastercard credit card or cash -- they are the only two payment forms accepted. 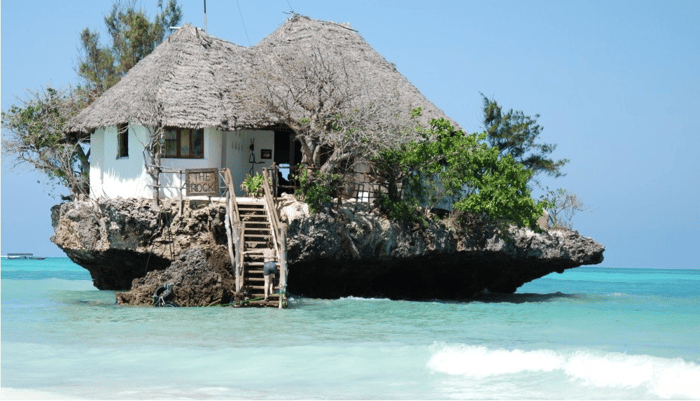 The Rock restaurant in Zanzibar is only accessible by boat at high tide. But Mastercard is trying to replicate the experience -- without the boat. Image source: The Rock.

Exact replicas of the furniture, silverware, and decor will be used, while scenes that would be typically viewed through the restaurants' windows will be projected onto the walls. Using what Mastercard calls a "bespoke sonic branding," customers will be transported to the restaurants through sound, hearing the chef's knife blades while eating at Terazushi; the waves of the Indian Ocean gently lapping against The Rock; and the clink of ice cubes dropped into a tumbler while at Lyaness. The purpose, it says, is to "create a unique ambient sonic DNA for each restaurant."

In the coming months, more new restaurants will move into residence at Spring, allowing Mastercard to create completely different experiences.

It builds on its previous Priceless Tables experiment, which created unique dining experiences one table at a time at landmark locations, such as Dodger Stadium, Paramount Studios in Los Angeles, or while elevated above Times Square just beneath one of its famous billboards.

At first glance, this seems like little more than a gussied-up Rainforest Cafe, the chain that tries to make you feel as if you're dining in a real rainforest, albeit with obviously fake flora and fauna.

There was also a time you could feel like you were in the Caribbean while eating at the Jimmy Buffett-inspired Cheeseburger in Paradise chain (only one restaurant out of two dozen remains open). Darden Restaurants does something similar with Bahama Breeze. And Ninja New York attempts to recreate a ninja village in feudal Japan.

Aside from the high-priced menus and pop-up flavor of the experience, the difference with Mastercard's restaurant is that a credit card company is running it in an attempt to make the card issuer more relatable to users.

Experiential marketing has become crucial to Mastercard's growth strategy. Earlier this year it removed its name from its logo, leaving only the red and orange circles, because the letters do not register well across all digital landscapes, such as smaller mobile devices. It also launched new sonic branding so that when you use your Mastercard, you hear its thematic melody.

We're likely to see more companies experiment outside of their traditional lanes in a bid to grab attention. Taco Bell, a Yum! Brands (YUM -0.85%) restaurant, recently opened a branded hotel and resort in Palm Springs, California, as it seeks to become more of a lifestyle brand.

What it actually means to live the "Taco Bell life" is open to conjecture. (And why would you want to, no matter how much you enjoy its Gordita Crunch?) But brands run the risk of appearing too gimmicky, and any impressions gained may not resonate for very long.

The GEICO cavemen tried to turn their popularity as insurance pitchmen into a cultural phenomenon, even getting a TV sitcom, only to have it fail miserably and get canceled after a month. The cavemen are now only seen periodically pitching GEICO these days.

Although Mastercard will never be able to fully replicate the experience of dining in Zanzibar, it might just get close enough to entice diners to pay up for the ambience of a restaurant they would never get to visit in real life. Whether that's worth having your Mastercard account dinged for the pricey tab remains to be seen, but rooms at the Taco Bell Hotel sold out within two minutes of going live. It's still doubtful, though, whether anyone will be getting the Mastercard logo tattooed on their arm.