Please ensure Javascript is enabled for purposes of website accessibility
Log In Help Join The Motley Fool
Free Article Join Over 1 Million Premium Members And Get More In-Depth Stock Guidance and Research
By Daniel B. Kline – Aug 20, 2019 at 4:05PM

The home improvement retailer will add an extensive product line of team-themed merchandise to its website.

Lowe's (LOW 0.01%) has never been a chain filled with merchandise carrying intellectual property (IP). The national retailer sells lots of name brands, but its marketing has largely been built around its expansive selection of home improvement items.

Consumers don't visit a Lowe's to get drywall, two-by-fours, or even appliances stamped with their favorite cartoon characters, superheroes, or TV personalities. You can buy a Weber grill or Craftsman tools, but neither will have a tie-in to any sort of IP.

That's going to change in a major way this year as the retailer has made an expansive agreement with the National Football League (NFL). Lowe's will offer more than 10,000 licensed NFL-branded merchandise items on its website and will launch an "online video 'homegating' series that will inspire fans as they prepare for the NFL season," according to a press release. 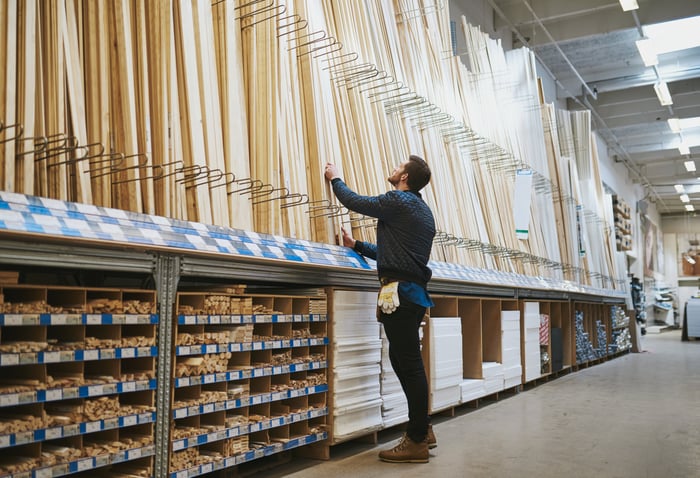 Lowe's has partnered with the NFL for an expansive line of products. Image source: Getty Images.

What is Lowe's doing?

The home improvement chain isn't going outside its wheelhouse. It won't be selling football jerseys or other apparel (at least for people). Instead, it will be offering a selection of items for tailgating and what it calls "homegating," the idea of having a tailgate party at home.

"Just like fans looking to up their game, we are focused on expanding our product selection to offer customers even more of what they're looking for while providing a personalized shopping experience online and in-store," said Lowe's Executive Vice President Bill Boltz in the press release.

Lowe's has been struggling compared to its chief rival Home Depot. That's relative in the overall retail market, where both home improvement chains have been resilient in the face of the so-called retail apocalypse. That's partly due to the nature of the products they sell. Consumers want to see or even handle many of the items both companies sell. That drives consumers to stores.

Lowe's, however, could use a product line that drives consumers to its website, and its partnership with the NFL may do that. Consumers don't need to handle grill accessories featuring their favorite team logo, making this product line ideal for a web-based partnership.

The product line will drive people to Lowe's website, and that's great for the chain. Once a consumer registers and provides credit card information, he or she is more likely to become a regular digital customer of Lowe's. Select items in the line will be sold in stores at an unspecified date "in the coming weeks," according to the press release.

Consumers have a strong connection to their NFL teams, and these products should drive sales. This deal will bring people to Lowes.com, drive in-store traffic, and lead to sales/digital registrations. It's a smart move by Lowe's CEO Marvin Ellison to differentiate his chain from Home Depot while also adding some add-on sales from existing customers.