Please ensure Javascript is enabled for purposes of website accessibility
Log In Help Join The Motley Fool
Free Article Join Over 1 Million Premium Members And Get More In-Depth Stock Guidance and Research
By John Ballard – Aug 20, 2019 at 7:10AM

Management says the company is only in the early phases of its growth.

Spotify Technology (SPOT -3.36%) is the leading music-streaming service with 232 million monthly active users and a growing list of 108 million paying subscribers. The stock is up over 30% so far in 2019, as the brisk pace at which Spotify is adding subscribers is pointing to a massive growth opportunity in music streaming.

Let's look at where the streaming market is headed over the next decade, and how Spotify can separate itself from its competitors. 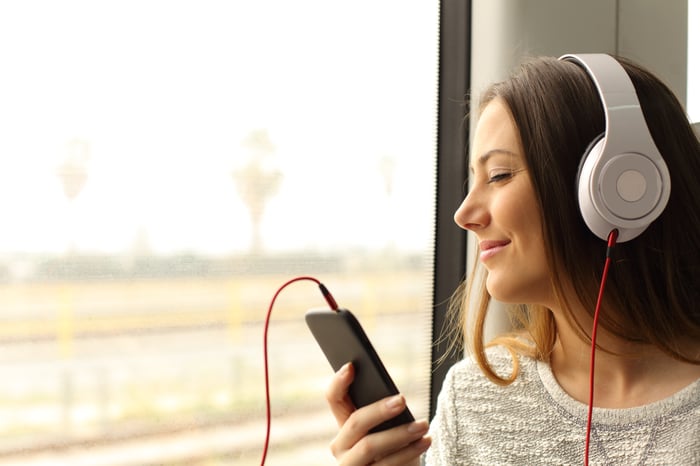 Plenty of ways to grow

Management believes it's in the "early innings of the growth of the streaming audio market," CEO Daniel Ek said during the second-quarter conference call.

The latest results tell the tale. Revenue surged 31% year over year in the second quarter, driven by a 31% increase in premium subscribers. Particularly encouraging was that fewer members canceled their subscriptions, noted by the record low churn rate of 4.6%. For that, management credited the investment in new features and improvements to the overall user experience.

Spotify is currently in 79 markets, and it just started to penetrate a massive market in India. Regions and countries Spotify is not in yet but would like to enter one day are Africa, Russia, and South Korea, among others.

In addition to new markets, there are a few other tailwinds to drive growth. For one, the percentage of people in developed markets who stream music on their smartphones is expected to more than double by 2030, according to Goldman Sachs. Emerging markets should grow even faster.

Another tailwind to watch for is the fact younger generations are spending more on music than prior generations. Having access to millions of songs is very important to music streaming listeners, and that could provide Spotify an opportunity to raise prices over time.

Spotify is currently testing a price increase for its family plan in Sweden. But research from Goldman Sachs says that price increases could dampen demand for streaming. While the threat of consumers resorting to piracy or switching to a lower-priced competitor is always there, I believe Spotify could have untapped pricing power over the long term by expanding its exclusive content.

Such content likely won't work with music, because Spotify has a delicate relationship it must maintain with the big music companies that ultimately control access to millions of songs.

Spotify pays about three-quarters of its revenue back to the music labels for rights to distribute the music, and those music companies have a stake in Spotify stock. If Spotify struck exclusive deals with music artists, that wouldn't sit well with the big three music labels, Sony BMG, Universal Music Group, and Warner Music Group.

Where Spotify could differentiate its platform and be able to raise prices over time is with exclusive content deals in podcasts. The company is investing heavily in the podcast market, recently acquiring three podcast providers.

The company sees this space as a way to diversify away from music and the companies that take a significant chunk of the company's gross profit. And podcasting is indeed a fast-growing outlet for entertainment, news, and other categories. The recent acquisition of Parcast expands Spotify's genre coverage to mystery and crime storytelling.

When Spotify announced the acquisitions of two other podcast companies, Gimlet and Anchor, Ek described the ultimate objective with these additions:

These acquisitions will meaningfully accelerate our path to becoming the world's leading audio platform, give users around the world access to the best podcast content, and improve the quality of our listening experience as well as enhance the Spotify brand.

The latter point about enhancing the brand appears to be what this is all about. Spotify has limited potential to differentiate itself from Apple Music, because both services offer virtually the same music catalog. But by investing in original podcast content, Spotify can stand above the pack, raise its subscription price on the demand for that content, and potentially become the Netflix of audio streaming.

What to expect in 10 years

The growing popularity of streaming is expected to double the music industry's revenue to $131 billion by 2030. Physical and downloaded music have been in a steady decline in recent years, while streaming services are taking over the industry. Top streaming services are making it more convenient, affordable, and legal to listen to just about every published song in existence on demand.

A rising tide is lifting all boats. The key players in the music streaming market -- including Apple Music, Sirius XM's Pandora, and Spotify -- are all experiencing double-digit growth. Spotify will likely still be growing in 10 years, and if it's successful with investments in podcasts, the company could be worth a lot more than it is today.