Please ensure Javascript is enabled for purposes of website accessibility
Log In Help Join The Motley Fool
Free Article Join Over 1 Million Premium Members And Get More In-Depth Stock Guidance and Research
By Daniel B. Kline – Aug 21, 2019 at 6:08PM

The company continues its omnichannel transformation.

Walmart (WMT -2.50%) had a strong second quarter, with revenue climbing $2.3 billion to $130.4 billion, and comparable-store sales in the United States growing by 7.3%, the biggest gain in more than a decade. Perhaps most importantly, the retailer saw its U.S. e-commerce sales grow by 37%.

The company still forecasts 35% U.S. e-commerce growth for the year, and for its U.S. stores to finish the year with a 2.5% to 3% gain in comparable-store sales. Walmart, however, isn't just resting on its laurels as it expects to invest $11 billion in capital expenditures through the full fiscal year. Much of that money will go toward continuing to build out its omnichannel capacity.

We're experimenting with emerging technologies to improve store operations and reduce friction in our customers' lives. The initiatives we have under way provide extended access to our brand and position the company to earn a greater share of our customers' wallet over time. 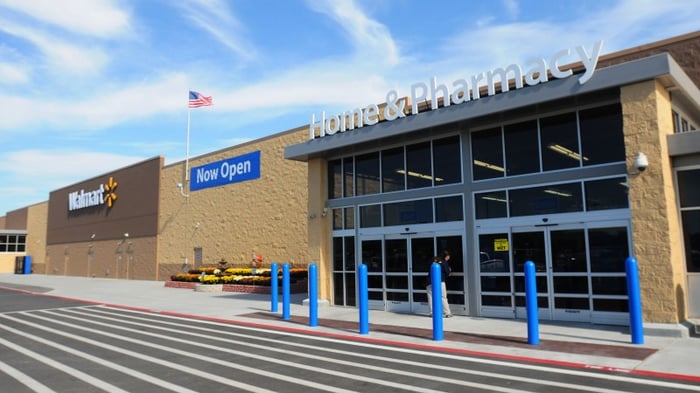 Walmart plans to expand programs that let consumers order online then pick up at a store. Image source: Walmart.

McMillon said he considers it a key focus for Walmart to find solutions that make shopping quicker so consumers can gain back time in their day. Finding those solutions involves not only technology and changing processes, but identifying the right people to lead various initiatives.

"You'll recall that last year, we hired the first-ever Chief Customer Officer for Walmart -- Janey Whiteside," he said. "We also recently created the new role of Chief Technology Officer and Chief Development Officer. We found a uniquely qualified leader for this position in Suresh Kumar."

The CEO called the changes "a natural progression" as part of the retailer's efforts to streamline its business and focus on omnichannel. McMillion, however, noted that he's not taking a singular approach to how his leadership teams oversee various parts of the business.

"The organizational changes we made in the U.S. during the quarter in areas like supply chain and finance are a critical step in our journey and will build upon our strong foundation," he said. "We've maintained some separation in merchandising for stores and eCommerce to keep the focus on our goals and enable speed."

"As we scaled grocery pickup in the U.S., it unlocked new capabilities like grocery delivery," he said. "Customers love these services, and we're rapidly expanding them to new locations and testing new options such as unlimited grocery delivery for a fee."

"Through this service, we'll help keep customers in-stock on the items they need every day," he said. "Starting in the fall of this year, a group of highly trained Walmart associates will begin delivering groceries directly into the homes of customers -- maybe in a garage, or in the refrigerator. It will be available to nearly one million shoppers in three U.S. cities."

3. A focus on digital

Walmart has focused on streamlining its process to best fulfill digital orders from its stores and distribution centers. McMillon explained how those efforts are continuing.

"We're lowering our variable costs per unit, improving gross margin and increasing the number of monthly active users," he said. "I'm also excited about the opportunity we have to expand our marketplace. We've quickly grown this piece of the business in recent years, and I know we can do even more as we look ahead."

Walmart has shown that it can be a player, even a leader, in grocery and digital. However, both of those areas continue to evolve, and keeping up (or even pulling ahead) will require investment, leadership, and maybe a bit of luck.

McMillon has his company on the right path, but Walmart has to fend off both established retailers and digital innovators. That's a challenging position to be in, but Walmart has done a good job making major changes and innovating despite it being a large, mature company.