The IT company and famous retailer both deliver bottom-line figures that are well above analyst estimates.

Today was a good day for shareholders of companies reporting their quarterly results -- hello, Target! -- since these were better than expected, by and large.

Happily, that trend is continuing after the closing bell. Several companies have reported their latest figures following market hours, and for the most part, they're quite good. Splunk (SPLK -4.70%) and Nordstrom (JWN -5.75%), to name two, handily beat analyst estimates for profitability. Read on for details. 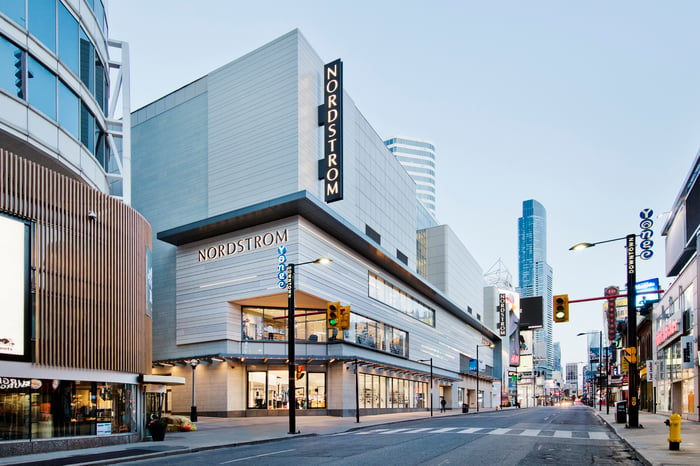 How do you keep investor fears of the retail apocalypse at bay? Well, if you're a big-name retailer, you post a bottom-line result that exceeds their diminished expectations.

That's what happened with Nordstrom in its Q2 of fiscal 2019. The company's revenue for the quarter declined by over 5% on a year-over-year basis, to $3.87 billion. That didn't meet the average analyst projection of $3.92 billion. However, the retailer netted $141 million ($0.90 per share) in profit, and while that was below the $162 million of Q2 2018, it blew past the average prognosticator estimate of $0.77.

The company attributed its successes in the quarter to "inventory and expense discipline."

Even though many analysts had cut their forecasts for Nordstrom in advance of the Q2 earnings release, the company's bottom-line beat is still convincing enough to juice the stock tonight -- it's up by nearly 11% in after-hours trading.

Nordstrom also made several minor adjustments to its full-year fiscal 2019 guidance. The company now expects a 2% year-over-year decrease in net sales. Previously, it believed that growth would be flat to 2% down. Per-share earnings are now forecast to fall between $3.25 to $3.50; formerly, this range was $3.25 to $3.65.

Collectively, analysts tracking the stock were modeling only $488 million on the top line and a per-share adjusted net profit of $0.12.

Splunk gave credit to the cloud for its improvements. "[T]he strength of our cloud business is driving a faster transition to a renewable software model," it said in the press release heralding the results.

Meanwhile, the company adjusted its revenue guidance for the entirety of fiscal 2020. It now anticipates it will book $2.3 billion for the period, a bump from the previous estimate of $2.25 billion. Splunk maintained its projection of adjusted operating margin, which is expected to be roughly 14%.

Splunk also announced that it's acquiring SignalFx, a privately held company that describes its core, eponymously named product as "the only real-time cloud monitoring platform for infrastructure, microservices, and applications." It didn't provide details regarding the price or terms of the acquisition. Regardless, SignalFx should add heft to Splunk's already weighty involvement in cloud solutions.

In spite of the much better-than-expected results and the complimentary asset buy, Splunk's shares are essentially trading sideways this evening.

2 Stocks for Your Watchlist Today