Please ensure Javascript is enabled for purposes of website accessibility
Log In Help Join The Motley Fool
Free Article Join Over 1 Million Premium Members And Get More In-Depth Stock Guidance and Research
By Matthew DiLallo - Updated Aug 22, 2019 at 9:44AM

Once the country’s natural gas champion, Chesapeake is pivoting toward oil.

Two years ago, Chesapeake Energy (CHKA.Q) was the nation's second-largest gas producer. However, it has fallen down the leaderboard and was most recently in sixth place. While rivals have stomped on the gas by making acquisitions and continuing to drill, Chesapeake has hastened its slide by selling some of its gas-producing assets.

The company aims to further distance itself from the top next year by pulling back on drilling gas-focused wells as it continues to pivot toward oil. It's all part of Chesapeake's new strategy to become an oil growth company, which CEO Doug Lawler highlighted on the second-quarter conference call. 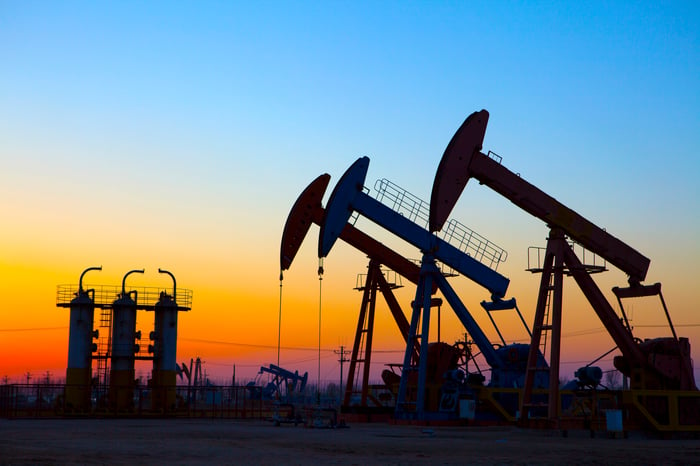 Chesapeake Energy's strategic shift toward oil began last year. The company started by ramping up its drilling efforts in Wyoming's Powder River Basin. The region established itself as the growth engine of the company as oil output doubled from 7,000 barrels per day (BPD) in the fourth quarter of 2017 up to 14,000 BPD by the end of last year. That helped boost its crude oil output by 10% for the year and up to 21% of its total production mix.

The company accelerated its transition to oil earlier this year by closing the $4 billion acquisition of WildHorse Resource Development, which it has since renamed Brazos Valley. That deal helped boost Chesapeake Energy's oil output by 10% year over year during the second quarter after adjusting for asset sales. Overall, the company pumped 122,000 BPD during the quarter, including 35,000 BPD from Brazos Valley and another 20,000 BPD from the Powder River Basin. That pushed crude to a record 25% of the company's total output.

Accelerating the shift toward oil

Chesapeake plans to continue pivoting toward oil in 2020, which was a central theme of Lawler's comments on the second-quarter call. He stated:

In 2020, we expect to allocate more capital to oil growth areas with less capital going toward our gas assets. As a result, we have an approximately flat capital program to 2019, we project our 2020 oil volumes will show double-digit percentage growth over 2019, while our gas volumes will show a double-digit percentage decline. Importantly, our projected adjusted EBITDAX remains approximately the same at 2019 levels using today's lower NYMEX strip pricing and our current hedge position.

As Lawler points out, Chesapeake Energy plans to keep 2020's capital spending range at this year's level of between $2.1 billion and $2.3 billion. However, it's shifting where it allocates capital away from gas-centric assets like the Haynesville Shale toward the oil-centric ones in the Powder River Basin and Eagle Ford Shale. As a result, its oil output will rise by double digits, while the underinvestment in its gas assets will cause production to decline by a similar percentage rate.

Given that the company produces more gas than oil, its overall production rate on a barrel-of-oil-equivalent basis will decrease. However, that shift won't have any impact on the company's earnings, which should match this year's level even though gas prices have declined.

The reason Chesapeake Energy is pivoting toward oil is that it has higher profit margins, which increases its cash flow. Lawler stated that: "The oil assets, the margin enhancement, and things that we're driving for with the sustainable free cash flow growth that we're targeting, that's all going to be driven by oil investments, now, notably the base and execution in South Texas and then the growth in Brazos Valley and the Powder River."

Because oil has higher margins, Chesapeake can produce less overall and still make as much money next year even though gas prices have fallen. Meanwhile, as its oil output continues growing in the coming years, earnings and cash flow should improve. That's because it will be essentially trading low-margin gas production for high-margin oil output.

The plan makes sense on paper

Chesapeake is moving away from natural gas because it can make more money producing oil. This strategy shift won't pay big dividends right away, given where commodity prices are right now. However, it should boost earnings in the future as the company's oil output keeps rising. Though this assumes that oil prices cooperate.

If crude prices weaken, on the other hand, then Chesapeake will have wasted a lot of time and money on a strategy that failed to deliver. That wouldn't be the first time considering the company's checkered history, which included a gas-fueled growth strategy that didn't work. The company's prior failures are why investors might want to wait to see if its new plan works before they consider buying shares.