Please ensure Javascript is enabled for purposes of website accessibility
Log In Help Join The Motley Fool
Free Article Join Over 1 Million Premium Members And Get More In-Depth Stock Guidance and Research
By Dan Caplinger – Aug 21, 2019 at 10:51AM

This week has featured many retailers reporting their latest financials, and today added a couple of well-known names. Both Lowe's (LOW 0.01%) and Target (TGT -0.23%) had good things to say about the consumer economy, and investors seem to be extrapolating that news to reflect the situation across the retail industry.

Shares of Lowe's jumped 11% Wednesday morning after the home improvement retailer gave its shareholders much better news in its second-quarter financial report than most had expected. Although the company's main rival had given a reasonably solid assessment of the health of the industry, Lowe's report reassured investors that it wouldn't get left behind. 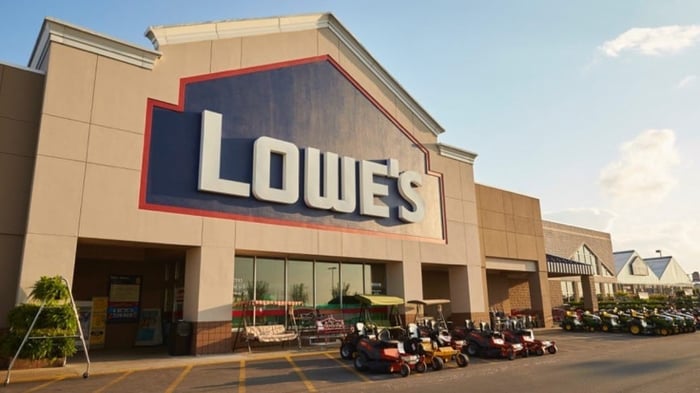 On their face, Lowe's results didn't show all that much growth. Revenue for the quarter was up just 0.5% from the year-ago period, and adjusted earnings per share climbed at a relatively slow 4% pace. Yet those following the stock were pleased to see comparable sales increased 2.3%, including a stronger 3.2% rise in comps for the company's U.S.-based home improvement business.

CEO Marvin Ellison celebrated the results. "Despite lumber deflation and difficult weather," Ellison said, "we are pleased that we delivered positive comparable sales in all 15 geographic regions of the U.S."

Lowe's has worked hard to catch up with its home improvement rival and establish itself as a leader in the retail niche once again. This report marks a step in the right direction, and shareholders are recognizing that fact with today's move higher.

Department store giant Target saw even stronger stock performance Wednesday morning, with shares climbing 19%. The company had made a lot of progress lately toward building positive momentum in its core retail business, and coming into its second-quarter report, investors wanted to see more gains.

That's exactly what Target delivered. Comparable sales increased 3.4%, contributing to the company's best two-year performance in more than a decade. Adjusted earnings per share jumped 24% from year-ago levels. Perhaps most importantly, Target's efforts to build out its digital channel kept paying off, with comparable sales for that area soaring 34%.

Target also reported early success from its same-day fulfillment initiatives. Between order pickup, drive-up service, and the Shipt grocery delivery service, the company got about 1.5 percentage points of its comparable-sales growth from these initiatives. That bodes well for Target's ability to compete with some of the giants of the e-commerce industry.

Finally, investors cheered Target's improved outlook. The retailer boosted its earnings guidance for the full year, and CEO Brian Cornell was happy to see strong growth in key metrics. After some doubts, Target shareholders seem confident that the department store specialist is back on track to take full advantage of opportunities in retail.