Let's look at whether the Latin American carrier's shares deserve the premium they're currently enjoying in the airline industry.

Maybe it seems disingenuous to ask if Copa Holdings (CPA -0.57%), which has a market capitalization of $4.4 billion and trades at just 13 times forward earnings, is overvalued, given that the S&P MidCap 400 Index currently sits at a forward PE ratio of 15.3. But if we place Copa's current market pricing in the context of the larger airline industry, the question gains some relevance: 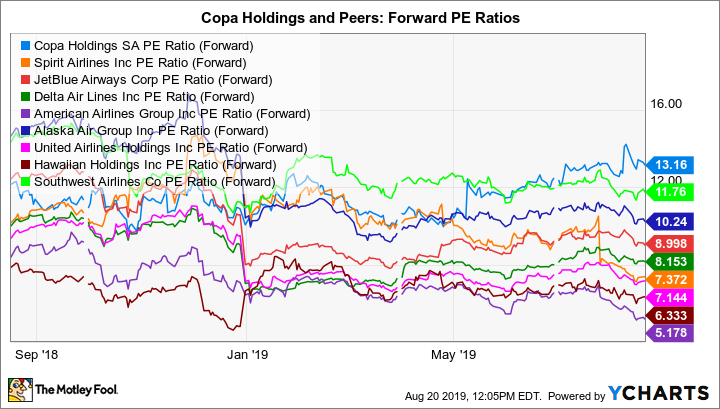 In a cross-section of legacy airlines, low-cost carriers, and ultra-low-cost carriers, Copa stands out for market pricing that is substantially higher than the forward PE ratio of 8.1 averaged by the rest of the group in the chart above.

Copa's shares have appreciated by 21% over the last 12 months, despite a plethora of industry headwinds. Most visible of these issues is the grounding of Boeing's 737 MAX airplane, which continues to disrupt airlines' profits and capacity planning. American Airlines (AAL -2.92%) reported in July that MAX groundings cost it $175 million in profits in the second quarter, effectively reducing its operating income by 17%. Southwest (LUV -2.11%), another carrier with significant investments in the MAX, relayed in its own second-quarter report that it's revamped its estimated year-over-year capacity outlook in 2019 in terms of available seat miles (ASMs), from 5% growth to a contraction of 1% to 2%.

Copa's exposure to the MAX grounding isn't insignificant, but it's manageable. The organization currently holds 6 MAX aircraft in its fleet of 104 planes and is awaiting delivery on 7 additional aircraft. Taking the MAX out of service reduced Copa's capacity in ASMs by 4.3% in the second quarter, yet revenue passenger miles (RPMs) only slipped by 2.5%. Copa's load factor (a measure of how fully flights are loaded) actually increased 160 basis points year over year to 85.1%, a sign of demand across its broader fleet and flight routes in general.

Investor angst over near-term economic growth is also compressing the stock charts of U.S. and global carriers. The World Bank forecasts that global gross domestic product (GDP) will decline from 3% in 2018 to 2.6% this year. Fears of a potential U.S. recession are also diminishing the outlook for the airline industry.

Yet Copa's geographical base of Latin America is benefiting from airline passenger traffic growth in both commercial and leisure segments, despite economic volatility in the region. Indeed, in the second quarter, Copa saw a strong demand environment and was able to exercise a bit of pricing power while also growing ancillary revenue sales. Yields (average fare per passenger mile) increased 4.1% year over year. The airline combined this with tight cost control, despite an unavoidable 5.7% increase in costs per available seat miles (CASM), excluding fuel, related to the MAX grounding. Even with the MAX cost burden, total year-over-year operating expense decreased by 2% in the second quarter. When combined with a 4% revenue improvement, the cost control resulted in a 37% increase in operating income over the prior-year quarter. 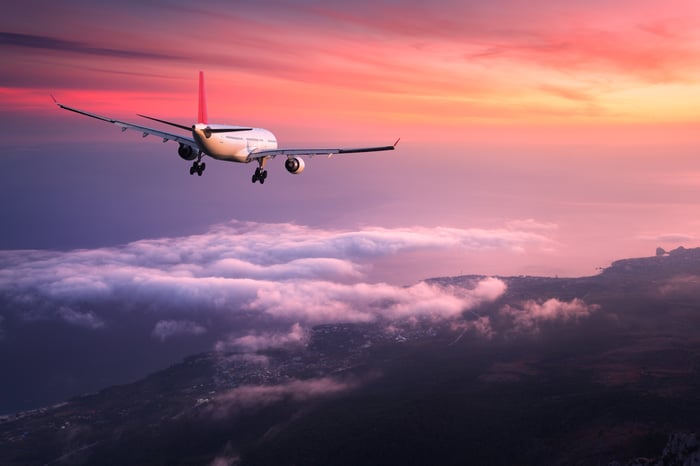 In addition to a talent for wringing out profit growth despite external headwinds, at least two other factors are supporting investors' willingness to pay a premium for Copa versus nearly all other U.S.-based competitors. First, the carrier tends to sustain demand through its sheer reliability. Digital air travel analytics provider OAG named Copa the world's most punctual airline this year, with an average on-time performance (OTP) index of nearly 90%. Qualitative statistics like this tend to manifest over time in a company's financial performance.

Second, Copa's moderate debt load and healthy annual operating margin of nearly 13% are conducive to generous cash flow, and the company rewards investors with a dividend yield that exceeds those of its rivals that also offer a regular payout to investors: 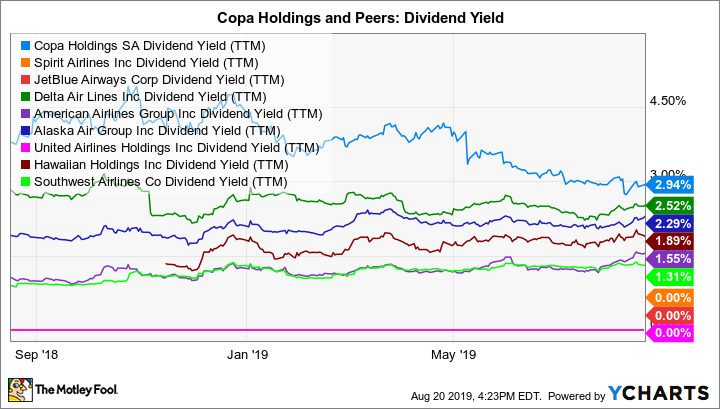 In an environment of steadily declining interest rates, stable dividend stocks with attractive income potential are starting to stand out. Even after its stock price ascent over the last year, Copa still sports a near-3% dividend yield. Add shareholder return attractiveness to the many other positive characteristics of this carrier, and it's clear that Copa may be closer to being fairly valued than undervalued.