Since its IPO in April 2019 priced at $36 per share, the cloud-native software company Zoom Video Communications (NASDAQ:ZM) has been performing well. A few months and one earnings report later, the market estimates the company's stock is worth about 158% more than its offering price, with the stock price currently over $93.

Considering the triple-digit revenue growth during the prior quarter, the lack of significant profit isn't worrying for the moment. But even when ignoring the bottom line, Zoom's valuation is stratospheric. Based on the midpoint of the fiscal 2020 revenue guidance, its price-to-sales ratio exceeds 52X.

The lofty valuation indicates the market expects strong growth and flawless execution over the long term. The next earnings results will be reported September 5 and will provide an opportunity to see if the company delivers results that match these expectations. And given the rich valuation, I will pay close attention to the following four key points. 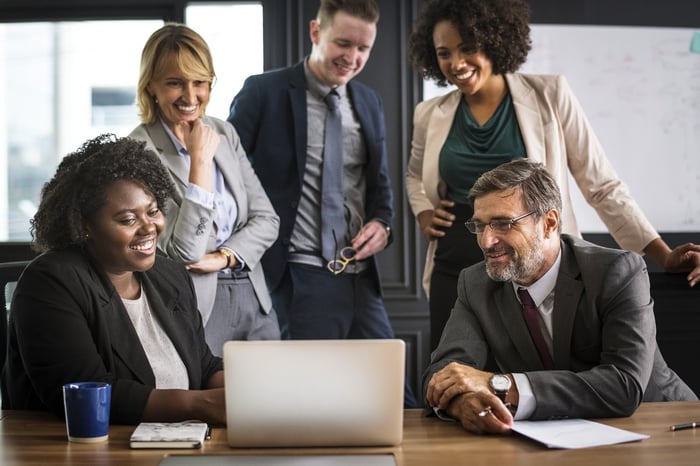 During the last earnings report, revenue jumped 103% year-over-year. And, taking into account the midpoint of the revenue guidance, management expects fiscal 2020 revenue to grow 62%. The revenue growth has been impressive. And given its increasing revenue base, sustaining this significant growth rate will be more and more challenging. Thus, a deceleration in forecasted revenue growth is logical.

But the company must report strong growth over the long term to justify such a high valuation. For instance, let's assume revenue increases at a compound annual growth rate (CAGR) of 40% over the next 10 years. Based on the corresponding revenue in 2030, the market still values the company at a price-to-sales ratio of about 1.8X.

Besides revenue growth, I will also be watching the evolution of deferred revenue during the next earnings report. It's a leading indicator of revenue as it represents advance payments not recorded as revenue, as long as the corresponding service is not delivered.

Sales and marketing expenses represented about 52.5% of the total revenue during the previous earnings. While these costs should diminish in proportion to revenue -- known as operating leverage -- over the long term, the expansion outside of the U.S. will require investments that could reduce profits.

Thus, as long as Zoom doesn't gain significant scale worldwide, the operating leverage isn't likely to materialize. And with only $23.8 million of revenue outside of the U.S. during the last quarter, scaling the business will take several years. With this context, during the next earnings, I will verify that the expected increase in sales and marketing expenses will correspond to growth initiatives.

3. Beyond the core business

Zoom is expanding its core business to support its growth and compete with huge companies like Cisco (NASDAQ:CSCO) and Microsoft (NASDAQ:MSFT). These tech giants benefit from many cross-sale opportunities that Zoom doesn't have. For instance, thanks to its vast user base, Microsoft recently announced its video collaboration solution Microsoft Teams exceeded 13 million daily users.

Given the competitive landscape, the launch of the "Phone Zoom System" in January was an important step toward Zoom's diversification. Also, during the latest earnings call, management discussed the possibility of using the cash on the balance sheet to acquire businesses and expand the portfolio.

Thus, I expect the company to report strong growth of its new phone system. And I will watch for an announcement about new products and potential acquisitions during the earnings call.

Considering the ramp-up and the timing of the operating expenses to support sales growth, I will contemplate the bottom-line forecast. I don't expect any significant increase in profits, but the company will show the strength of its business if it continues to avoid losses while still growing at a fast pace over the next few quarters.

But, more importantly, with such a lofty valuation, any revision of the expected revenue will have a significant impact on the stock price.

Given its spectacular growth and its strong balance sheet, Zoom Video Communications is an attractive company to own. But the current valuation corresponds to high growth projections. The upcoming earnings report will give us an opportunity to see if the company can match the expectations of the market.