Please ensure Javascript is enabled for purposes of website accessibility
Log In Help Join The Motley Fool
Free Article Join Over 1 Million Premium Members And Get More In-Depth Stock Guidance and Research
By Daniel Sparks – Aug 23, 2019 at 9:05AM

The quarter was fueled by a 35% year-over-year increase in online ecosystem revenue.

In its fiscal fourth quarter, financial software company Intuit (INTU 1.26%) impressed investors with better-than-expected top and bottom lines. The strong quarter benefited from double-digit growth in sales from both its consumer group and its small-business and self-employed group.

"Our business continued its strong momentum in the fourth quarter, resulting in full-year revenue growth of 13 percent, exceeding our original guidance of 8 to 10 percent growth," said CEO Sasan Goodarzi in the company's fiscal fourth-quarter earnings release. 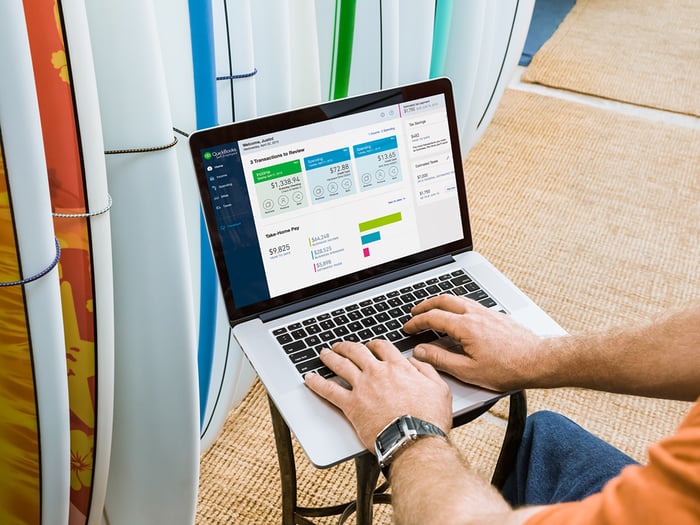 Intuit's fiscal fourth-quarter revenue jumped 15% year over year to $994 million, easily beating management's guidance for revenue during the period to increase 10% to 12%. This was also far ahead of analysts' average forecast for revenue of $962 million. Highlighting the company's momentum, its revenue growth rate during the period was an acceleration from 12% growth in fiscal Q3.

Intuit lost money during the quarter, which is typically one of the company's seasonally weakest periods. But the financial software company's non-GAAP (adjusted) loss per share of $0.09 was much narrower than the $0.14 to $0.16 loss management had guided for. In addition, it was better than analysts' average forecast for a loss of $0.14.

More specifically, playing a central role in the company's revenue growth acceleration was a 35% year-over-year increase in Intuit's online ecosystem revenue -- a revenue categorization that lumps together its fast-growing online small-business and self-employed products and services.

Revenue in Intuit's small-business and self-employed group increased 16% year over year. Key to this segment's performance was continued rapid growth in the company's QuickBooks Online (QBO) subscribers. It finished the year with 4.5 million QBO subscribers, up 33% from the year-ago quarter. This is an acceleration from 32% year-over-year growth in fiscal Q3. In addition, the company said QuickBooks Capital has now funded $441 million in cumulative loans -- up from $360 million at the end of fiscal Q3.

With broad-based business growth and continued strong performance in the tech company's important online ecosystem revenue, Intuit is going into fiscal 2020 firing on all cylinders.