MercadoLibre (NASDAQ:MELI) went public in 2007. The owner of an online marketplace to connect buyers and sellers, it was touted as the "eBay of Latin America." At the end of the first day of trading, it was valued at $1.3 billion.

More than a decade later -- Christmas Eve of last year, to be exact -- it's market cap stood at $11 billion. That's a solid return.

What has happened over the last nine months, however, has been a sight to behold: MercadoLibre has almost tripled in valuation to over $30 billion. And it might just be the start of things to come. 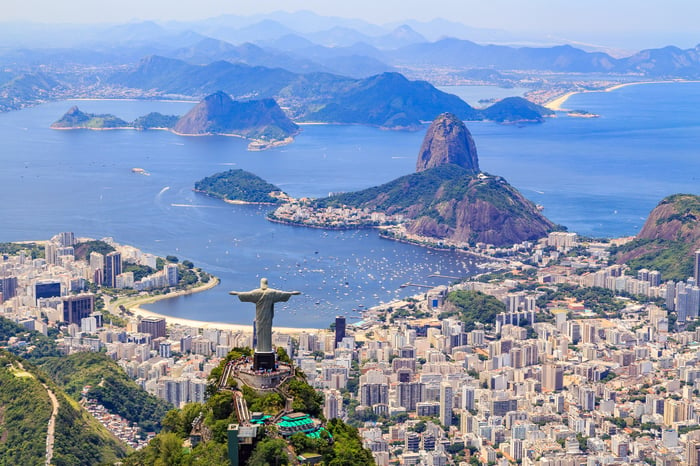 The company's pop is not because the marketplace is thriving (although it's doing fine), or because the company's fulfillment capacity is making it the dominant e-commerce force down south (it is).

The tripling of the company's value has much more do to with MercadoPago, a payment option the company offers that has grown in popularity faster than anyone could have imagined. Let's unpack where that growth has come from, and what's left for the company to capture.

In its 2007 prospectus, MercadoLibre said:

That is, it helped people to be able to buy things online.

That might seem like a silly hurdle for us here in the United States. Just type in your credit card number! But things are very different in Latin America: Huge numbers of people in multiple countries are "unbanked."

What does that mean? If we look at the region's four largest economies today -- in order: Brazil, Mexico, Argentina, and Colombia -- there are about 321 million adults. Of those, 141 million don't have a bank account of any kind.

Because e-commerce happens over the internet, MercadoLibre simply needed a way for people to be able to pay for things. Absent that, it would miss out on huge amounts of business. Because you could charge your account with cash at various locations, the unbanked had a chance to buy things online.

Between 2003 and 2007, MercadoPago was rolled out in Argentina, Brazil, Mexico, Venezuela, Colombia, and Chile. The company generally charged an 8% fee for processing payments for MercadoLibre vendors. That's a steep fee, but this was also a valuable service at the time.

At first, MercadoLibre simply offered MercadoPago as a payment option for vendors. As MercadoLibre became more popular, however, it had more leverage. More consumers were using MercadoPago, and it didn't make sense for merchants not to accept it.

By 2012, one-third of the stuff bought on the marketplace was paid for via MercadoPago. Here's what the growth in overall payments looked like over that time. 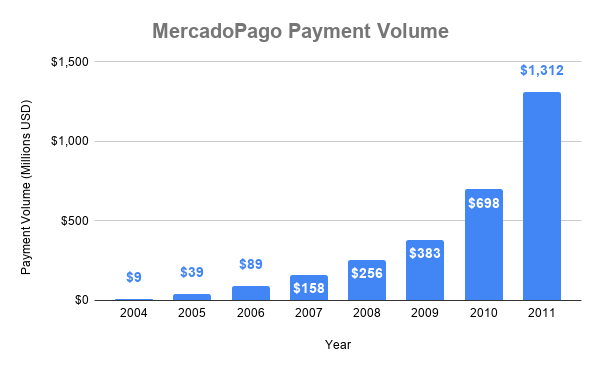 Catching lightning in a bottle

MercadoPago's growth is impressive. But when MercadoLibre looked at the data it had on hand, it noticed something funny. MercadoPago was also available to use "off-platform." All that really means is that a person could pay someone using it -- as long as both parties were using the tool -- even if it wasn't to buy something on MercadoLibre's website.

Reflecting on this trend in its 2018 annual report, the company stated:

"[We] observed that individuals, micro merchants and small and medium-sized enterprises in the physical world were being underserved or overlooked ... and that a very large number of retail transactions were settled in cash throughout the region."

Sure, MercadoPago had become the grease for the wheels of the company's marketplace. But there's no reason it couldn't go beyond the marketplace. That's why, in 2015, the company started offering mobile point of sale (mPOS) machines to small and medium-sized merchants in Brazil.

What is an mPOS? If you've ever paid for something at a farmers' market and had your card swiped through a Square plug-in attached to a smartphone, you've used an mPOS.

The sales via mPOS were so popular that they were rolled out in Mexico and Argentina in 2016. Today, they account for over 50% of all off-platform cash running through MercadoPago.

The decision to pursue this market has been far more successful than many thought possible. While data for off-platform versus on-platform spending only goes back to 2012, here's what the overall growth looks like since 2004. 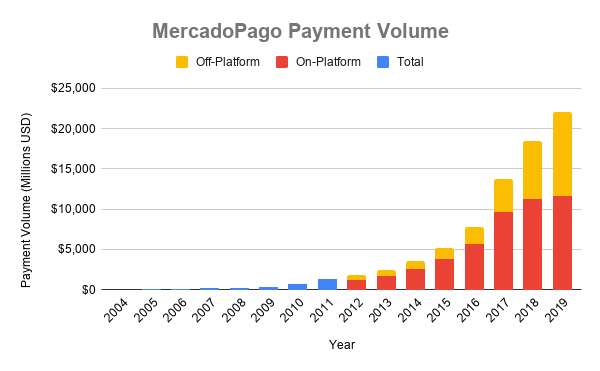 And keep in mind: Those 2019 figures only have six months of growth factored in. Off-platform spending surpassed on-platform during the second quarter and has more than doubled during the first half of the year.

That, in a nutshell, is why the stock's market cap has almost tripled.

But how big could this opportunity really be? It's tough to say. Most global intelligence companies focus on North America and the Asia Pacific region when it comes to fintech. That said, McKinsey predicts that the global payments industry will be processing $300 billion per year by 2022.

Over the past 12 months, MercadoPago has processed about $22 billion. Clearly, there's still lots of room for growth. The company is building a moat around this new business in a number of ways.

Those initiatives are important because several players have taken note. PagSeguro (NYSE:PAGS) and StoneCo (NASDAQ:STNE) are two recent IPOs that offer payment solutions in Brazil. Both have rapidly grown their payment volume as well.

But there needn't be only one winner in this battle for payments. Just as vendors stateside accept Visa, Mastercard, American Express, or even PayPal, so too can Latin American vendors benefit by being agnostic.

I think there are two enormous advantages MercadoPago has that will allow it to capture an outsized portion of this market:

That's why I believe MercadoPago's -- and, thus, MercadoLibre's -- best days are still ahead of it. We haven't even touched on the powerful marketplace and shipping solutions the company has. But the payments space alone is enough to justify starting your own due diligence on the company.

It's also why -- even after the stock's run-up -- I have no intention of parting ways with my shares, which already account for 8% of my family's holdings. If the position weren't already so large, I'd be adding shares. I suggest you consider doing the same.