salesforce.com (NYSE:CRM) reported its earnings after the market closed on Thursday, and the company continues to deliver. For its fiscal 2020 second quarter, which ended July 31, Salesforce generated revenue of $4 billion, up 22% year over year and 23% in constant currency. In what has become a commonplace occurrence, the results easily surpassed both analysts' consensus estimates and the high end of the company's forecasted range, which both topped out at $3.95 billion.

Even as the beat and raise has become commonplace, it never ceases to delight investors, who bid the stock up more than 6% in after-hours trading. 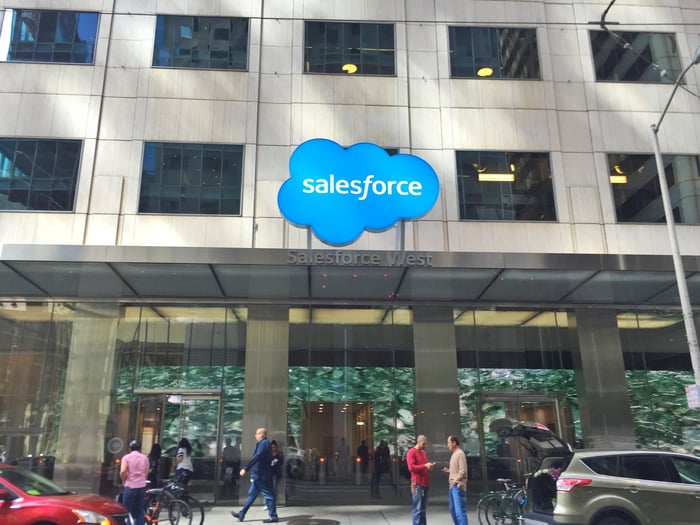 Subscription and support revenue accounted for the lion's share of Salesforce's results of $3.75 billion, up 22% year over year, while professional services and other revenue remains more of a footnote, increasing to $252 million, up 14% compared to the prior-year quarter.

The company continued its record of success across its product portfolio. Revenue from the sales cloud grew to $1.1 billion, up 13% year over year, while the service cloud's faster growth continued, climbing to $131 billion, up 22% year over year -- accelerating from the 20% growth last quarter. The two smaller operations produced the biggest percentage gains, with the Salesforce platform and other growing 28% year over year to $900 million, while the marketing cloud and commerce cloud together grew to $600 million, up 36% from the prior-year quarter.

Each of the company's geographical regions contributed to its revenue growth. The Americas still account for the majority of the company's business, producing revenue of $2.816 billion, up 20% year over year. Sales in Europe, the Middle East, and Africa (EMEA) rose 25% year over year to $786 million, while up 302% in constant currency.

Revenue from the Asia-Pacific region (APAC) climbed to $395 million, each up 26% year over year, or 27% in constant currency. It's worth noting that growth in both EMEA and APAC accelerated compared to the first quarter and are becoming important contributors to Salesforce's results.

The company's remaining performance obligation -- which consists of future revenue that's under contract but that Salesforce hasn't yet recognized -- expanded to $25.3 billion, up 20% year over year, and 23% in constant currency. The portion of the performance obligation that will come due over the coming 12 months jumped to $12.1 billion, a 23% jump compared to the prior-year quarter, and up 25% in constant currency.

This all occurred in the wake of the company's acquisition of Tableau, which closed on Aug. 1, two months earlier than anticipated. Tableau, which delivers data analytics infused with artificial intelligence, is expected to add between $550 million and $600 million to the full-year results.

The robust forecast came as a surprise to investors. To put this into the context of Wall Street's expectations, analysts' consensus estimates were calling for revenue of $4.25 billion and earnings per share of $0.61.

Investors never seem to tire of the old beat and raise -- and Salesforce continues to deliver.