Please ensure Javascript is enabled for purposes of website accessibility
Log In Help Join The Motley Fool
Free Article Join Over 1 Million Premium Members And Get More In-Depth Stock Guidance and Research
By Selena Maranjian – Aug 24, 2019 at 9:15AM

There are many things that can derail a relationship or marriage, and financial issues can be particularly big problems.

It's no secret: Many marriages end up in divorce. Various studies estimate that the percentage of marriages that end up dissolved is around 40% to 50%. When it comes to causes of divorce, the usual suspects include infidelity, incompatibility, and substance abuse. But there's another, often overlooked, cause: financial issues.

Couples who aren't on the same page about their money and don't discuss the topic openly can have a harder time staying together -- whether they're married or not. 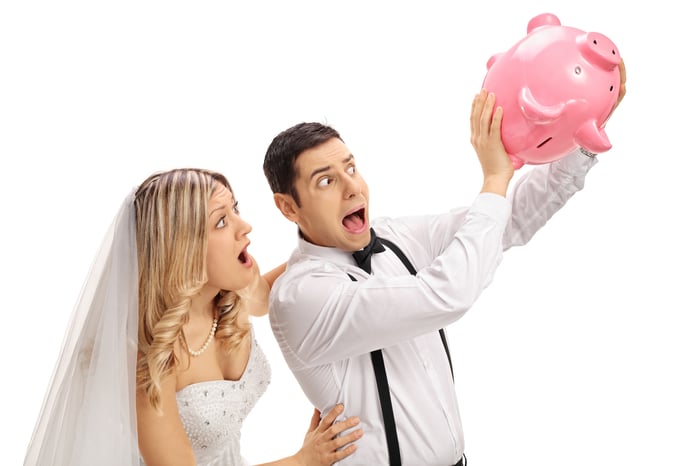 The folks at The Ascent recently surveyed 1,000 people in committed relationships and asked them about the role of money in their lives. Here are some interesting findings about three habits that can threaten relationships:

Among 14 relationship challenges, three that were rated between moderately serious and serious involved financial deception -- about debt, earnings or assets, and purchases. Just as spouses might be deceptive regarding an affair or substance use, they can be deceptive about how much various purchases cost, about how much they earn or have, and about how much they owe -- often on high-interest rate credit cards. The purchases that men are most likely to lie about are electronic devices, alcohol and gambling, while women are likely to about purchases of clothing, gifts for others, and cosmetics.

Such deception is problematic not only because it reflects a lack of trust and communication, but also because it can get in the way of achieving financial goals. If one or both partners are aiming to put a kid through college but one has misrepresented how much he or she is earning, or has racked up $10,000 on credit cards, achieving goals will become much harder or impossible. If you owe $10,000 on credit cards and are being charged a not-unusual annual interest rate of 20%, you're looking at forking over around $2,000 per year just for interest.

No. 2: Not being transparent

82% of survey respondents reported being transparent with their partner over finances, while 18% claimed they kept things private. That's encouraging, because when you're in a partnership such as marriage, it's usually important to be sharing goals and working toward them together, while communicating freely about them and about your progress. Not doing so can lead to minor and major misunderstandings and arguments -- and can sabotage your financial futures.

Being overly private about money can leave a couple not discussing the topic sufficiently and perhaps resenting things that have not been disclosed or discussed. For example, 65% of men and 47% of women reported that they are not able to own something that they would like to because of their relationship.

No. 3: Not trusting or being trustworthy

Trust is, or should be, a major feature of any committed relationship -- with regard to finances as well as to fidelity and other matters. Yet 30% of men and 39% of women in the survey reported that they didn't trust their partner to spend money responsibly. Yikes.

That stat suggests that roughly a third of people in committed relationships are in ones that have significant room for improvement. It's also supported by two other stats:

So what can you do with the information above, if you're in a serious relationship? Well, you might start by doing a self-assessment, followed by a discussion with your partner.

Ask yourself how transparent and honest you are about your spending and whether you've been hiding any purchases, income, assets, debt, or even financial desires. Think about how freely and easily you and your partner discuss your financial goals and money management progress, and think about how much you trust each other. Have your partner do the same, and then compare notes. Aim for a relationship where you can work together to achieve your goals -- such as a comfortable retirement -- as that can lead to lasting satisfaction.