Epcot is struggling to keep up with its peers, and it will probably be Disney World's least visited park in 2019. Something has to change -- and it will.

Epcot is Disney's (DIS -2.00%) second oldest theme park in Florida and, until recently, its second most visited attraction year after year. But while the iconic Magic Kingdom continues to be the most visited theme park on the planet, and Disney's Hollywood Studios and Animal Kingdom are picking up steam after recent well-received expansions, Epcot seems to have gotten lost in the shuffle.

Epcot feels like it's stuck in a time capsule. Dated attractions and country-specific pavilions have little more than retro charm for a thinning number of nostalgia-minded visitors. The attraction only springs to life when food and drink festivals come around, and that's not ideal or sustainable for the family-friendly resort.

Something needs to push Epcot into the future -- or at least out of the past. And finally, it seems as if Disney is getting serious about breathing new life into its stagnant theme park. 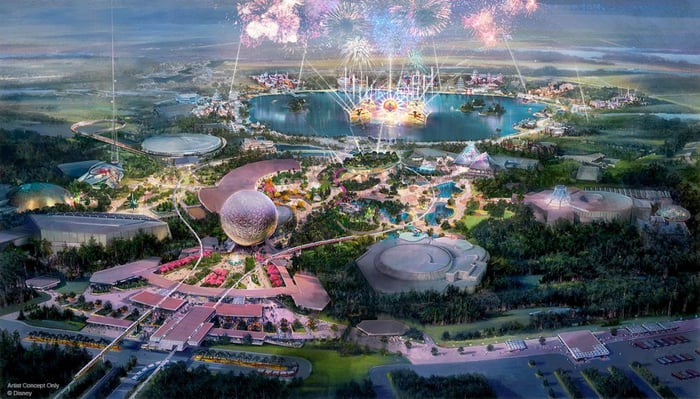 Looking for a spark

"Just one spark," goes the imagination-inspiring jingle at one of the park's oldest attractions, and on Sunday Disney will spell out its vision for a massive makeover at a park that's starting to show its age. New rides, experiences, and possibly even a country pavilion will be announced during the biennial D23 expo for Disney fans at its original Disneyland park.

Epcot needs the attention. It had a decent attendance uptick in 2017 -- even as it slipped from second to third place in attendance for the first time in its then 35-year history -- but it was the biggest laggard last year. With Disney's Hollywood Studios and Animal Kingdom gaining ground this year, the trend is not its friend.

Four years ago, I predicted that Epcot would be Disney World's least visited park by 2020. That seemed outlandish at the time, but if anything I was too conservative. Epcot will probably slip to fourth this year, as Disney's Hollywood Studios benefits from the opening of Toy Story Land last summer and Star Wars: Galaxy's Edge opening on Thursday. Animal Kingdom has been Disney World's fastest growing park since the 2017 debut of Pandora -- The World of Avatar, starring the resort's most impressive ride. The original Magic Kingdom park has been growing more slowly than the three smaller parks in recent years, but it has a wide enough lead to coast until reinforcements come with the opening of a Tron-themed coaster in 2021.

Disney has laid out its vision for the new Epcot, one that involves tearing down photo-speckled monoliths and tired buildings and replacing them with open spaces featuring interactive areas, including a Moana-themed dancing water experience. It already has a couple of new rides in the works -- a Guardians of the Galaxy indoor roller coaster and Ratatouille dark ride. There are some wild rumors about even more changes, and Disney might or might not confirm them on Sunday during its D23 theme parks panel.

This has generally been a good year for Disney investors. There have been a few hiccups since its poorly received fiscal third-quarter report earlier this month, but the stock is still beating the market -- and the rest of its consumer-facing peers -- with its 21% year-to-date return. With Disney films dominating the box office again in 2019 and positive buzz for November's launch of Disney+, now the historically steady theme parks need to pick up the pace.

With Epcot as the biggest laggard, there's plenty riding on what Disney announces this weekend to refresh the gated attraction that's failed in recent years to live up to its title of "Experimental Prototype Community of Tomorrow." It's hard to represent tomorrow when you're still stuck on yesterday.