Tesla (NASDAQ:TSLA) is making another last-gasp effort to save its solar business after CEO Elon Musk announced a relaunch over the weekend. Tesla will rent a solar system to customers in some states for as little as $50 per month and will sell a system for between $10,830 (3.8 kW) and $32,490 (11.4 kW) before tax incentives. On the surface, they seem like decent deals, but Tesla hasn't done much right in solar over the last three years, so there's reason to be skeptical.

Solar installations have fallen nearly 90% since Tesla acquired SolarCity, and some investors (myself included) think the days of solar at Tesla are nearly done. The latest attempt to resuscitate Tesla's solar business seems simple enough, but there's no evidence it's going to work, and some parts of the new sales process seem downright strange. I don't think the latest rebrand will do anything to change Tesla's fundamental problems in solar.

Solar over the internet gone wrong

With the new lower Tesla pricing, it's like having a money printer on your roof if you live a state with high electricity costs. Still better to buy, but the rental option makes the economics obvious.

Tesla has simplified what it's offering, giving customers the choice between a 3.8 kW system, a 7.6 kW model, and a large 11.4 kW solar system. But that's where the simplicity ends.

Since most solar installers are selling door-to-door, they can assess the suitability of a home for solar and explain the benefits before a contract is signed. Tesla puts most of the onus on the homeowner, only starting to assess the suitability of solar "after you place your reservation". What does a reservation entail? It requires you pay $100 and "agree to the Energy Order Purchase Agreement." With the click of a mouse, I could have been obligated to spend as much as $32,490 on a solar system that hasn't yet been designed with no idea what my savings would be and no clue when installation would occur. Only "in some cases" will Tesla send an actual person to your home before installation, instead relying on aerial footage and pictures from the homeowner to design the system. 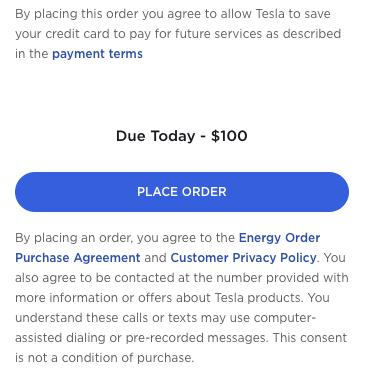 There is one out for buyers with this line in the contract: "You, the buyer, may cancel this transaction at any time prior to midnight of the third business day after the date of this transaction."

You have three days to jump ship, otherwise, you're technically obligated to buy an undetermined solar system from Tesla at an unknown time in the future. Wait, what!?

Tesla is trying to move its sales process online, but that's been exactly the problem for the company. Solar is an expensive and complicated investment for a homeowner. Companies like Sunrun (NASDAQ:RUN) and Vivint Solar (NYSE:VSLR) lock customers into a 20- to 30-year contract and they lay out the savings and what a solar system will look like on a home, all usually in person.

This is a time-intensive and expensive process, but it's valuable, and that's exactly why those companies are growing while Tesla is shrinking. Customers need the hand-holding; they need assurance that what they're signing up for will look good on their home and that it'll save them money. Signing a contract for an unknown product seems like it's moving in the wrong direction.

If you look at another company gaining market share, you'll see what Tesla could be doing. SunPower (NASDAQ:SPWR) says it will launch a tool that will allow a homeowner to get a solar system designed and quoted, along with estimates of cost savings, in less than a minute. We don't yet know what information SunPower will require to get the quote completed because the product isn't launched yet, but I doubt a fully executed contract will be part of the process.

As skeptical as I am of Tesla succeeding with its solar strategy, I do think the rental model is a lot better for consumers than the leases or power purchase agreements currently preferred by Sunrun and Vivint Solar.

Current financing requires customers to sign onerous contracts that lock them into decades of payments to solar installers. If they sell a home, the new homeowner has to take on the lease or there are penalties the current homeowner has to pay. Even when a 20-year lease is complete, companies require a homeowner to buy an old solar system or sign a new lease.

Tesla is offering a $1,500 fee to abandon the rental and remove the solar system. That seems like a fair deal for consumers. If this pushes other solar companies to embrace terms that are more friendly to consumers rather than lock them into multidecade contracts, it could lower a hurdle to even wider adoption. With a small breakup fee, Tesla may actually be on to something.

Solar isn't where Tesla wants to be

If the rental/online sales model doesn't work, Tesla may need to consider exiting the solar business. It's a distraction at this point and isn't driving significant revenue. Working with partners to include solar with electrical vehicle sales would be a better idea, and long-term, I think that's where Tesla will want to be.