Here's a hint: The outlook for legalization looks quite sunny.

Eleven U.S. states have legalized recreational marijuana. Over half of them are in the western part of the country: Alaska, California, Colorado, Nevada, Oregon, and Washington. Three are in the northeast: Maine, Massachusetts, and Vermont. Two are more centrally located: Illinois and Michigan.

So far, no southern state has moved forward with legalizing recreational pot. But that could about to change. Efforts are underway to allow the legal use and sale of marijuana in the most southern state on the continent: Florida. And there's a possibility it could happen as soon as 2020. 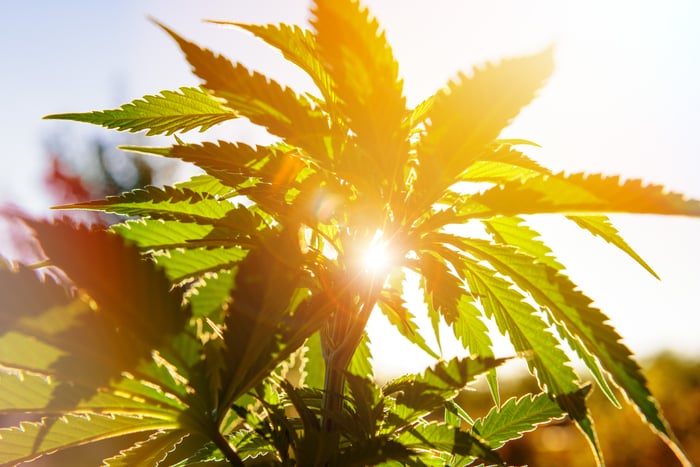 The push for pot

Marijuana advocacy group Regulate Florida is leading the initiative to put an amendment on Florida's ballot in 2020 to legalize recreational marijuana. The group has already collected the minimum number of valid signatures to submit the proposed ballot language for a judicial review by the Florida Supreme Court and a financial impact review.

The state of Florida requires proponents to collect valid signatures equal to 8% of the total votes cast in the state in the most recent presidential election to put a constitutional amendment on the ballot. That translates into a little over 76,000 signatures. These signatures must come from citizens in at least 14 of Florida's 27 counties.

Regulate Florida has already gathered more than 83,000 signatures so far. Collecting signatures is a time-consuming and expensive process. Michael Minardi, campaign manager for Regulate Florida, recently told the Miami Herald that gathering the necessary signatures will cost around $5 million.

Some supporters with deep pockets appear to be ready to step up to the plate. John Morgan, the founding partner of the Morgan & Morgan law firm, tweeted earlier this month, "I believe that #marijuana should be legal!! I think we have time and I think there is money to get it done." Morgan spent close to $7 million to help fund the 2016 Florida initiative to legalize medical marijuana.

Morgan knows that it's an uphill battle to collect all the signatures needed by the Jan. 1, 2020, deadline. But with his money and public platform behind the effort, the chances of success are much higher than they would otherwise be.

If the amendment does make it on the 2020 ballot, the odds of passage appear to be pretty good. A recent Quinnipiac University poll found that 65% of Florida voters support legalizing recreational pot.

ArcView Market Research and BDS Analytics have projected that Florida will be the third-largest legal cannabis market in the U.S. by 2022, behind only California and Colorado, based solely on sales of medical cannabis. The marijuana market researchers estimate that Florida's medical cannabis annual sales could top $1.7 billion within the next three years.

A detailed economic impact review of recreational marijuana legalization should be on the way. In the meantime, we can make some pretty good guesses on the potential size of the Florida market based on the experience in other states.

Colorado is on pace to generate legal pot sales of more than $1.6 billion this year. ArcView and BDS Analytics think that Colorado's legal marijuana market could jump to around $2.5 billion by 2022. Florida's population is roughly 3.7 times the size of Colorado's. It's quite possible that Florida could have a legal pot market with more than $9 billion in annual revenue in the latter part of the next decade.

Stocks that could profit the most

Even if that estimate is overly optimistic, there's no question that Florida would claim one of the largest legal pot markets in the U.S. if efforts to pass a constitutional amendment are successful. This would create great opportunities for several marijuana stocks.

I'd put Trulieve Cannabis (TCNNF 3.74%) near the top of the list. Trulieve currently has 29 medical marijuana dispensaries in Florida. Unlike most cannabis companies, Trulieve is already profitable. Its revenue continues to soar, up 30% on a quarter-over-quarter basis in Q2. Unsurprisingly, Trulieve has donated to the effort to place an amendment on the ballot in Florida to legalize recreational marijuana.

MedMen (MMNFF -0.47%) is another company that's pushing for the legalization of recreational pot in Florida and stands to profit significantly if the effort succeeds. The company plans to open 11 retail locations in the state by the end of this year and holds licenses for up to 24 more. MedMen's southeastern director of government affairs, Nick Hansen, serves as chair of the political committee Make It Legal Florida, which is actively working to legalize recreational marijuana.

It's still too soon to know for sure if Florida will indeed legalize recreational pot in 2020. But Trulieve and MedMen, among others, could be in for tremendous growth if it happens.

Editor's note: A previous version of this article incorrectly referred to MedMen's Nick Hansen as Jeff Hansen. The Fool regrets the error.