Please ensure Javascript is enabled for purposes of website accessibility
Log In Help Join The Motley Fool
Free Article Join Over 1 Million Premium Members And Get More In-Depth Stock Guidance and Research
By Matthew Frankel, CFP® – Aug 25, 2019 at 11:17AM

This company is ready to thrive during a recession and is trading very cheaply.

The stock market has retreated significantly from its highs, and there are a lot of companies starting to look very attractive as long-term investments. However, if I were to choose just one stock to buy more of right now, it would have to be Berkshire Hathaway (BRK.A -0.22%) (BRK.B -0.28%).

Not only is the conglomerate led by Warren Buffett one of the best-positioned companies to thrive if the economy plunges into recession, but the stock is also trading at one of its cheapest valuation levels in several years. Here's why I'm considering adding more Berkshire Hathaway to my portfolio, and why you might want to take a closer look for yourself. 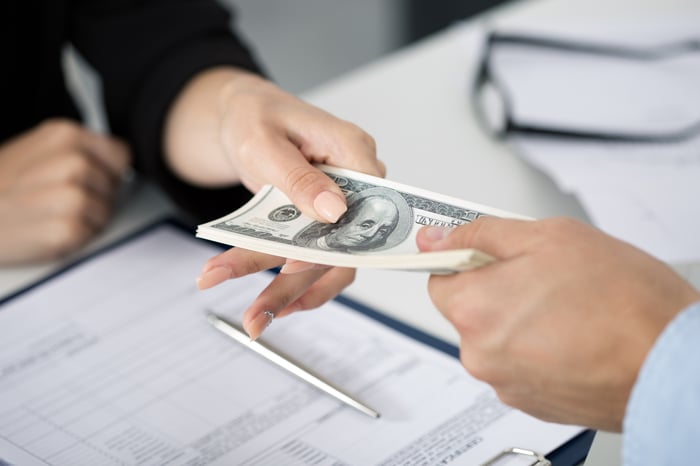 A business model that works in any economy

If you didn't know, Berkshire Hathaway is an insurance company at its core. Its central business consists of several massive insurance operations, including auto insurer Geico and reinsurance giant General Re.

In addition, Berkshire owns a collection of more than 60 subsidiary businesses, including well-known names such as Duracell, Dairy Queen, Clayton Homes, Pampered Chef, and Precision Castparts, just to name a few. That's in addition to a stock portfolio valued at more than $200 billion that includes large investments in Apple, Bank of America, American Express, Coca-Cola, and more.

While Berkshire certainly has some cyclical operations, most of its subsidiaries and stock investments are engaged in businesses that tend to do well in any economic climate. For example, drivers will always need to pay for car insurance (Geico), and consumers will always need safe places to put their money (Bank of America), just to name a couple of examples.

Plus, it's important to realize that Berkshire has more than $122 billion in cash on its balance sheet as of the end of the second quarter. Sure, this has been a source of frustration for Berkshire's shareholders, as well as for Warren Buffett. There has been a major lack of attractive opportunities.

However, this also means that Berkshire is perhaps in the best position it's ever been in to take advantage of a drop in the stock market. If investor fears turn out to be accurate and a recession hits, Berkshire will have a lot of money to deploy when things get cheaper.

Buy it even cheaper than Buffett and other heavyweights

Not only is Berkshire Hathaway a business that tends to perform well during recessions and has a fantastic track record of performance in any type of economy, but it's on sale right now.

Berkshire's buyback plan allows the company to buy back stock at any time, but only when Buffett and Vice Chairman Charlie Munger both agree that it's trading for a substantial discount to its intrinsic value. Based on the recent buyback activity, it's apparent that both of these legendary value investors agreed this was true at a price greater than you can currently buy the stock for.

Buffett and Munger don't appear to be alone here. Hedge fund manager Bill Ackman recently made a large investment in Berkshire, putting 11% of his fund's assets into the stock. As Ackman explained when the investment was revealed:

"The catalyst for our current investment in Berkshire is our view that the company is currently trading at one of the widest discounts to its intrinsic value in many years, at a time when we expect the operating performance of its subsidiaries to improve as a result of certain managerial and organizational changes at the company. While Mr. Buffett has long been one of the most high-profile and closely followed investors in the world, we believe that Berkshire Hathaway's undervaluation is partially explained by the fact that it is one of the least followed and misunderstood mega-cap companies." https://www.forbes.com/sites/antoinegara/2019/08/16/bill-ackman-pershing-

The lowest valuation in years

The bottom line is that Berkshire Hathaway is like a diverse, recession-resistant investment portfolio in a single stock. Although it has a strong track record of outperforming during the tough times, with more than $100 billion in excess cash on its balance sheet, it's really set up to do well if the economy takes a turn for the worse.

Even better, Berkshire is trading at a multiple of its book value that, aside from a quick blip at the end of 2018, hasn't been seen since early 2016. In short, this is a cheap stock that should deliver strong long-term returns for patient buy-and-hold investors.