On Friday, Aug. 23, the Dow Jones Industrial Average (^DJI -1.71%) fell 623 points, reacting negatively to another round of escalations in the trade dispute between the U.S. and China. Various news sources reported the drop as a major plunge, fanning fears that a longer-term pullback in the market might be right around the corner.

Yet concerns about how stocks will do in the long run get exaggerated when you look at the Dow's point moves. That's because the Dow's long history and consistent rise over more than a century have pushed the average so far upward that what used to sound like monumental moves are now much more pedestrian.

Friday's performance gives a good case in point. The 623-point drop was the 17th-biggest downward move for the average in its history. Yet it only represented a percentage change of 2.37%. That was the smallest percentage move among the Dow's 20 biggest point declines.

From a wider perspective, you can see from the chart below how big moves have become less significant over time. 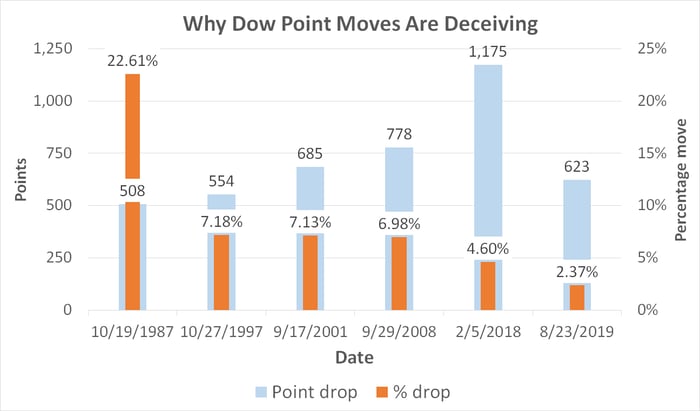 The 1987 stock market crash was the biggest one-day drop in both point and percentage terms at the time. Yet the 508-point decline no longer ranks among the biggest moves for the Dow. The post-9/11 685-point slump in the stock market was a larger point plunge but represented only about a third of the percentage move, and the worst day of the 2008 financial crisis didn't even match the 2001 percentage decline despite being almost 100 points larger. By 2018, even a 1,175-point drop was a notably smaller move in terms of percent.

Dow point moves make great news headlines, but they're becoming much less important over time. By focusing on percentage changes instead, you'll be able to keep perspective on just how much the stock market is moving.