The steep drop was fueled by a slowdown in net subscriber growth. The company added 2.7 million subscribers in the second quarter, the fewest net additions in three years and well short of the 5 million additions that the company forecast.

For long-term investors, this shouldn't cause panic. Netflix has seen bigger declines in a history that has rewarded patient investors. But, like any maturing company, Netflix will face challenges as competition ramps up, including downward pressure on subscription pricing and rising content costs.

The competition is getting tougher

Competition is nothing new for Netflix. It has taken on rivals and grown subscriptions for years. But competition is increasing, and according to an Aug. 21 report from eMarketer, Netflix had 90 percent of U.S. streaming video subscriptions in 2014. That is expected to be 87 percent this year.

The company is the dominant player in the video streaming world, but the decline in market share is a reflection of the challenges that increasing competition can present.

Amazon Prime Video (NASDAQ:AMZN) and Hulu both have smaller subscriber bases but are gaining market share in streaming. With increasing streaming options, customers will be forced to make decisions about how they will spend their money ... and their time. There are only so many hours in a day to binge watch Netflix's Orange Is the New Black or HBO's Game of Thrones, and there are big players about to enter the fray. Disney (NYSE:DIS) will launch its Disney+ streaming service Nov. 12, and Apple (NASDAQ:AAPL) is expected to launch its paid streaming service that same month.

Disney+ could affect Netflix on two fronts. First, Disney is a content machine, and blockbusters once found on Netflix are moving. Captain America, Thor, and the Avengers soon will join Luke Skywalker, The Incredibles and others on Disney+. Second, Disney+, along with Apple TV+ and others, will force more difficult consumer decisions.

Consumers subscribe to an average of three video streaming services, according to the 13th edition of Deloitte's digital media trends survey. Which ones will consumers choose? As has been the case for generations, popular content will attract viewers, and Netflix spends billions producing it. Those investments have paid off with award-winning material. The company won 23 Emmys in 2018, matching HBO for the most of any network. The competitors again topped Emmy nominations in 2019, with HBO receiving 137 and Netflix 117.

Netflix management is banking that original content will not only attract new subscribers, but also make the service so valuable that it can raise subscription rates at the same time.

That strategy has been working, but the script took a scary turn for investors in the second quarter.

In January, Netflix announced it would raise its most popular plan's subscription rate $2 per month.The company's fourth price increase in its 12-year history moved the standard plan from $10.99 to $12.99, the first time the company raised the plan by more than $1.

The company's last hike, a $1 increase announced in October 2017, had the desired effect for management and investors. In 2017, Netflix produced $11.7 billion in revenue. That swelled to $15.8 billion in 2018, a 35-percent increase. The price increase also didn't slow subscription growth. It rose 26 percent in 2018, slightly stronger than 2017's 24 percent growth.

Right now, however, investors are concerned. Netflix's subscriber slowdown in the second quarter was a surprise, especially after consecutive quarters of torrid growth. 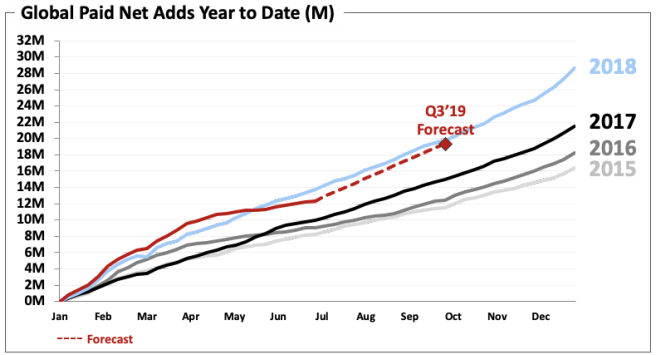 Management noted that price increases were a factor in the slowdown. In the U.S., Netflix's net subscriber count declined by 126,000 versus a total U.S. subscriber base of more than 60 million. Although this decline is small relative to the total subscriber base, investors are primarily concerned with growth at a high-flying company like Netflix. Therefore, investors will be looking for a return to growth in future quarters. Management said the hit Stranger Things 3 has gotten the third quarter off to a fast start and forecasted growth of 7 million net subscribers for the period.

It's possible that Netflix can continue to raise prices without slowing subscription growth, but that might be a more difficult strategic decision in coming years.

During the earnings video conference, Chief Executive Officer Reed Hastings was asked if Netflix is maturing as a company. As he speculated on whether Netflix could someday grow to be as large as YouTube, Hastings made this point:

"So the real question is can we produce enough content that people are willing to pay for?"

While profitable, Netflix has been issuing debt to pay those costs. In the last 12 months, the company is cash-flow negative, burning through $3.2 billion. Netflix has $12.6 billion in long-term debt, but also has $5 billion in cash on its balance sheet.

The debt won't be an issue, as long as the subscriber base keeps growing. Hastings believes that will happen. "Our products have never been in better shape," he said. "Our rate of investment is extremely high. So if investors believe in internet television, which I think is an easy one to get there, then our position in that market is very strong."

The second-quarter subscriber slowdown could ultimately be revealed as a buying opportunity, as was the case three years ago. But the video streaming giant is facing greater competition than ever, and that's something investors should contemplate as they consider buying shares.