Please ensure Javascript is enabled for purposes of website accessibility
Log In Help Join The Motley Fool
Free Article Join Over 1 Million Premium Members And Get More In-Depth Stock Guidance and Research
By Leo Sun - Aug 27, 2019 at 9:51AM

The departure of its CEO and soft earnings guidance have brought out the bears.

HP's (HPQ 2.62%) stock recently fell to a multiyear low after it announced that CEO Dion Weisler, who has led the company since its split from Hewlett Packard Enterprise (HPE 2.11%) four years ago, will step down in November to attend to a family health matter. He will be succeeded by Enrique Lores, the president of HP's imaging, printing, and solutions business.

That upcoming departure, along with a lower-than-expected earnings forecast for the fourth quarter, cast a dark cloud over HP's third-quarter report, which actually topped expectations on the top and bottom lines. Let's discuss what happened, and whether or not HP's stock is worth buying at these levels.

HP's revenue rose 0.1% annually to $14.6 billion during the quarter, beating expectations by $20 million. Two-thirds of its revenue came from personal systems, which include PCs and workstations, and the rest came from printers and printing supplies. Here's how those two businesses fared over the past year.

HP's personal systems growth was supported by higher shipments of both notebooks and desktops, which rose 2% and 11% annually, respectively. The unit's commercial revenues rose 10% annually, buoyed by robust demand for enterprise devices with tighter security features and longer-lasting batteries.

Its consumer revenues fell 11% due to longer upgrade cycles, Intel's (INTC 1.77%) ongoing chip shortage, and competition from mobile devices -- but that decline was partly offset by stronger sales of its OMEN gaming PCs. The unit's operating margin expanded 170 basis points annually to 5.6%, thanks to tighter cost controls and lower prices for certain components (like hard drives and memory chips).

However, HP's printing revenues fell as shipments of its commercial and consumer units fell 4% and 10%, respectively. Those declines were caused by lower enterprise spending amid tough macro headwinds and longer upgrade cycles. Meanwhile, its higher-margin supplies revenue also declined 7%, partly due to competition from suppliers of cheaper generic ink and toner. As a result, the printing unit's operating margin contracted 40 basis points annually to 15.6%.

Those declines indicate that HP's expansion of its printing business -- which include its takeover of Samsung's (OTC: SSNLF) printing unit, the introduction of industrial 3D printers, textile printers, and the expansion of its Instant Ink subscription program -- aren't moving the needle yet. 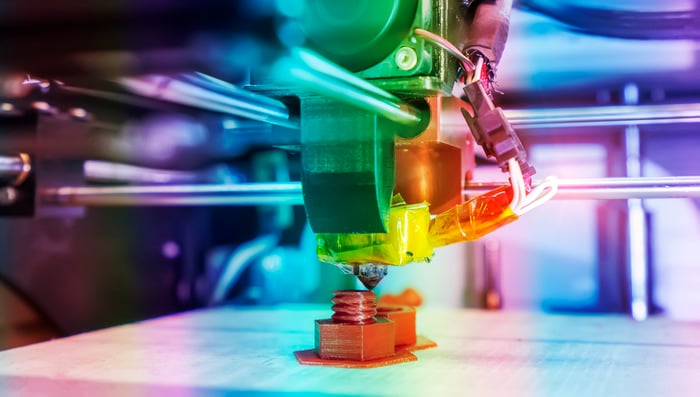 However, the strength of HP's personal systems unit still boosted HP's total adjusted operating margin from 7.2% to 7.6%. That expansion, along with buybacks, boosted HP's adjusted earnings 12% to $0.58 per share -- which beat estimates by $0.03.

Was the bad news really that bad?

HP's headline numbers looked solid, but the midpoint of its fourth-quarter earnings guidance of $0.55-$0.59 per share, at $0.57, missed the consensus forecast of $0.58. That tiny miss raised concerns about HP's supplies business becoming a dead weight on its margins and earnings growth. HP also expects its supplies revenue to "remain weak" in the fourth quarter and fall 4%-5% for the full year.

In other words, HP doesn't expect any of the unit's aforementioned growth initiatives to bear fruit this year. But over the long term, those efforts -- especially its moves into niche printing markets -- could stabilize the business.

The PC business is a mixed bag. On one hand, component prices (especially DRAM and NAND chips) should remain low and boost its gross margins, and the resolution of Intel's chip shortage could boost sales of its consumer PCs again. On the other hand, the U.S.-China trade war could offset those benefits. HP's plans to move up to 30% of its notebook production out of China could also weigh down its margins, and a backlash against American brands could benefit its Chinese rival Lenovo (LNVGY 0.39%).

Weisler's departure is disappointing, since he revived HP's struggling PC business with fresh high-end designs, new form factors, and better security features after its split with HPE. But incoming CEO Lores has also been with HP for three decades, is credited with simplifying HP's cost structure, and currently leads its printing unit -- so its future remains in capable hands.

Is it time to buy HP?

I own shares of HP, and I have mixed feelings about this latest report. Its core PC business is still stable and offsetting the weakness of its printing unit, its free cash flow remains strong (rising 55% annually to $2.2 billion during the quarter), and the stock is cheap at eight times forward earnings and a forward yield of 3%.

Those factors prevent me from selling the stock down here, but I'm reluctant to add more shares before the printing unit stabilizes and the trade headwinds wane. Therefore, investors should sit on the sidelines and stick with more dependable income stocks for now.