Please ensure Javascript is enabled for purposes of website accessibility
Log In Help Join The Motley Fool
Free Article Join Over 1 Million Premium Members And Get More In-Depth Stock Guidance and Research
By Jeremy Bowman - Updated Aug 29, 2019 at 9:27AM

It may not be death or taxes, but blowout growth every quarter from Okta (OKTA 1.43%) is about as close as you can get to a guarantee in today's market.

The cloud-based identity and security specialist posted another impressive quarter with strong top-line growth as the company added new customers, expanded customer relationships, and ramped up its business with the biggest enterprises it serves. Shares were trading down 2% after hours, which may be mostly a reflection of how far the stock has already come. It's more than doubled over the last year and is up more than 400% since its IPO in April 2017.

Let's look at the key numbers behind Okta's second-quarter report before diving deeper into the quarter. 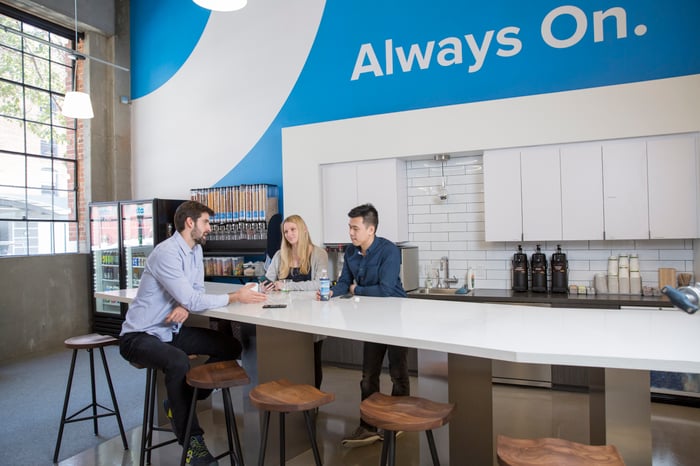 Growth in the quarter was driven by the usual factors. Subscription revenue jumped 51% to $132.5 million, and it added about 450 customers in the period to grow total customer count to more than 7,000.

Increasingly, Okta is seeing its growth come from its largest customers, a sign that its products are being embraced by the world's biggest companies and that more Fortune 500 names are signing on to its platform. COO Frederic Kerrest said that the value of its contracts with its top 20 customers has about doubled over the past year, and Okta signed a Fortune 50 company, now its biggest, in the quarter.

One new metric the company shared in the quarter was remaining performance obligation (RPO), a proxy for bookings that are yet to be fulfilled, which was up 68% from a year ago to $913.6 million. That sort of figure shows how Okta could be on track to reach $1 billion in sales in the next couple of years.

On the bottom line, margins continued to improve, although the company is still operating at an adjusted loss. Adjusted operating loss as a percentage of revenue narrowed from 20.3% to 7.1% as Okta is gaining leverage on sales, marketing, and general and administrative costs, though research and development (R&D) expenses continue to grow briskly, a sign that the company has a number of new and improved products in the pipeline. Free cash flow improved from negative $11.3 million to negative $4.3 million, and CFO Bill Losch said the company was on track for delivering positive free cash flow for the year.

CEO Todd McKinnon summed up the company's performance: "We had another exceptional quarter with strong growth in subscription revenue, billings, and remaining performance obligation."

Management again called attention to the secular drivers in its industry, saying that "every company is becoming a tech company" and as more companies join the cloud, Okta will continue to grow. Management also downplayed concerns about any competitive threats and explained why Okta is the leader in its category. McKinnon said that the company's "competitors are mostly in the legacy basket," meaning that as a cloud-only provider, Okta can be more nimble than legacy operators like IBM.

And management noted the strong demand for its products. Kerrest said that traditionally, "Vendors have not done a good job at making customers successful," leaving an opening for Okta because it has made customer success a key goal.

Management was also pleased with its placement in Gartner's Access Management Magic Quadrant. The IT research firm ranked the company tops in its category, calling it the leader in both its ability to execute and the completeness of its vision.

It has made a habit of leaping over its own guidance, and while investors shouldn't be overconfident, there are a number of signs that the company's momentum is only gaining. Increased R&D spending and the 68% growth in RPO both seem like promising signs, over the near term and long term.

Kerrest added that he was confident in the company's positioning heading into the second half of the year.