A paradigm shift in the energy sector favors ConocoPhillips for long-term shareholder value.

Since the oil and gas downturn of 2015, shareholders of companies large and small have pressured management to tighten spending in order to chart a course for consistency. ConocoPhillips' (COP -0.63%) prudence and cost-conscious behavior are tailor-made for this paradigm shift.

On the other hand, many companies have largely ignored tightening their spending and paid the price. Take Occidental Petroleum (OXY -0.30%) for example. Oxy's recent gun slinging acquisition of Anadarko was meant to be a courageous act of heroism to drive long term efficiencies in West Texas' booming Permian Basin, the largest oilfield in North America. Investors don't seem to be ready to give Oxy the benefit of the doubt, and as such, the stock has plummeted to a 12-year-low while desperately struggling to maintain a ~7% dividend.

Meanwhile, ConocoPhillips only pays a 2.3% dividend, has barely any Permian assets, but is widely regarded as one of the most, if not the most, disciplined United States E&P company. CEO Ryan Lance has repeatedly said that he will not chase expensive Permian deals, opting instead to say "We're sticking to our plan". 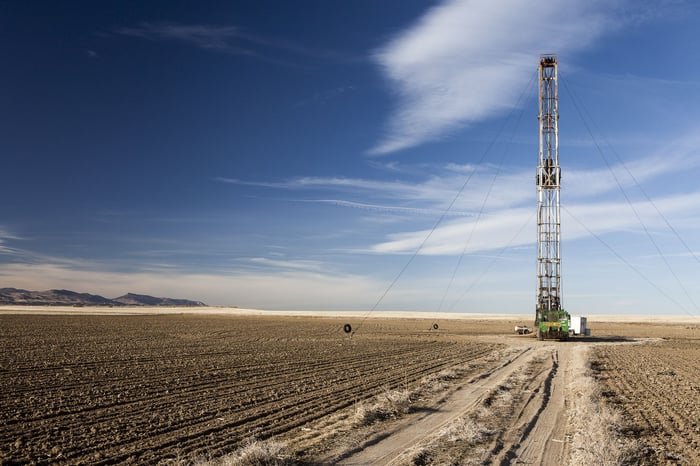 ConocoPhillips is all about reducing their breakeven price per barrel, not necessarily chasing new opportunities. "We can pay a growing dividend and sustain our production at less than $40 per barrel [WTI], and we can do that because we have a portfolio that doesn't have a lot of capital intensity. We have high margin production, and we have a relentless focus on the cost side of the business. Captured in our company today we have $16 billion barrels of resources that have a cost to supply that average less than $30 per barrel [WTI]." – Ryan Lance, CEO ConocoPhillips, 2019 Annual Meeting of Shareholders, May 14th, 2019.

Before the downturn, publicly traded oil and gas companies had the green light from shareholders to engage in several risky but potentially profitable business strategies such as:

Many companies had as much debt as their market capitalization, thereby making their enterprise value double what the value of their company was to shareholders. This means that every dollar made is really like making two, and every dollar lost is really losing two. In a cyclical business, this only raises the stakes, making good times amazing and bad times terrible.

Although this is a common practice among stocks across all sectors, taking a large chunk of net income and paying a quarterly dividend eliminates the possibility of using that profit to pay off debt. Meaning, shareholders will be appeased with a dividend at the expense of an ever-expanding debt balloon that continues to inflate with interest.

Instead of pocketing free cash flow, which is simply the profit from operations, oil and gas companies were encouraged to spend free cash flow on new business opportunities. This is yet another high risk, high reward move.

Pocketing free cash flow to pay off debt or return cash to shareholders by increasing dividends is a safe and secure way to manage a balance sheet. But, companies were encouraged to pull the trigger if an opportunity came knocking at their door. Judging from spending patterns, companies must have found several attractive opportunities. Guns were blazing across the country as businesses continued to rack up expenses on the logic that investments would pay off down the road.

In 2007, and then again during $140 oil in 2014, Oil and gas companies enjoyed a valuation luxury simply not seen in today's energy market. Higher-than-market PE ratios were awarded on the confidence of strong growth and cash flow. That premium valuation no longer exists in oil and gas companies, and has instead, moved on to tech companies.

For example, many recently listed and small publicly traded tech stocks in Silicon Valley have the same green light that these oil and gas companies once had to spend and spend on the promise of growth. It's a winning strategy that's easier said than done. Even larger tech stocks like Netflix (NASDAQ: NFLX) and Amazon (NASDAQ: AMZN) barely squeeze out a profit, opting instead to take their revenues from their high margin subscription model businesses and allocate them to new ventures.

He goes on to articulate that operators went from "outspending cash flow, to spending within cash flow to now free cash flow generation". This means companies are underspending cash flow, or basically going under budget so that they can buy back stock, increase dividends, or even pay down debt.

ConocoPhillips is the king of balance sheet bounty. The company has an operating cash flow of nearly $13 billion and a PE of 8.3. The stock's 16 billion in debt, but 8.5 billion in cash signals a healthy balance sheet. Best of all, ConocoPhillips only has a 19% payout ratio, one of the lowest among any upstream, midstream, or downstream oil and gas company. The low payout ratio, combined with rich cash flow, signals that ConocoPhillips has the cash necessary to raise its dividend or easily fund new projects.

For value investors looking to gain exposure to the energy sector, ConocoPhillips may be worth a consideration, especially considering how cheap the sector is compared with the rest of the market.

Proceed With Caution When Considering This Ultra-Popular Energy Stock
358%