The business might yet prove to be a less risky play on the rise of cannabis, but it has plenty left to prove to investors.

While the market opportunity of the fledgling cannabis industry is undeniable on paper, the direction and velocity of policy decisions in major markets have been difficult to pin down in reality. The regulatory uncertainty, coupled with the sheer number of companies hoping to carve out a piece of the market, may make it difficult for investors to identify the stocks and businesses best positioned for success.

One way to remove some risk from the search for cannabis stocks is to focus on companies with supply or service agreements already in place. Case in point: Neptune Wellness Solutions (NEPT 2.01%). The extraction services company has contracts with some of the top cannabis producers. It promises to deliver a rapid expansion of both extraction capacity and revenue in the next few years, which has sent shares soaring in the last year or so. Following a 30% decline in the last month, should investors with a long-term mindset consider the stock a buy? 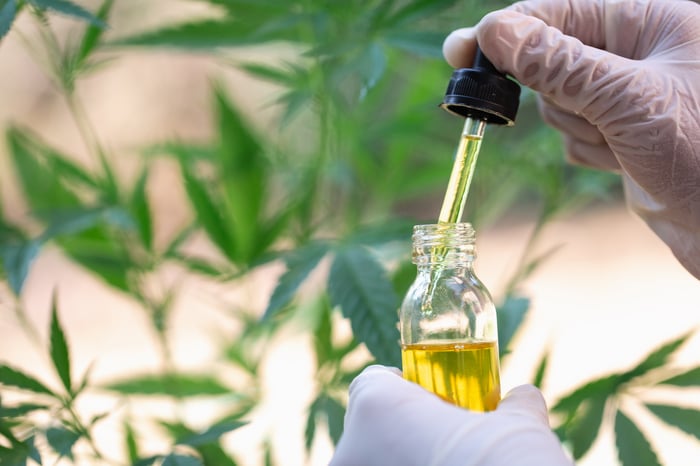 Where is the company now?

Rather than grow cannabis plants in large warehouses, Neptune Wellness Solutions provides extraction services to purify cannabinoids and isolate cannabinoid-containing resins from the raw plants grown by customers. It plans to use ethanol, rather than the industry standard carbon dioxide, as the extraction medium, which could be more cost-effective. The business model still requires the company to obtain regulatory licenses to ensure it properly handles inventory, but processing cannabis should be less risky than growing it, and the company also plans to offer consumer products of its own to further diversify revenue.

Things started to heat up in June. Neptune Wellness Solutions kicked off the month by announcing a services pact with Tilray to extract cannabinoids from at least 125,000 kilograms of cannabis and hemp over a three-year period, with 20% of the total volume expected to be processed in the first year of the agreement. A few days later, a similar deal was announced with The Green Organic Dutchman to process at least 230,000 kilograms of raw biomass over a three-year period. Neptune will also formulate and package finished products for the customer.

Shortly after that, Neptune Wellness Solutions announced that its wholly owned Quebec subsidiary received an amended operating license that will allow it to increase extraction capacity from 30,000 kilograms of raw biomass per year to 200,000 kilograms annually. That will be key to executing the deals with Tilray and The Green Organic Dutchman.

The company told investors that the "commercial production of cannabis extracts during the quarter was impacted by constrained operations and extraction capacity," although it expects near-term bottlenecks to be addressed by the end of September. Those expectations underpin an optimistic outlook from Neptune, but investors might want to temper their own expectations for now.

Where is the company heading?

The near-term plan sets out specific milestones that investors will be watching.

Neptune Wellness Solutions hasn't issued financial guidance for any future period, but the company expects that its two extraction facilities could generate over $450 million in annual revenue at just 50% capacity. That's a pretty big number to toss around, especially considering the business generated just $24.4 million in total revenue in all of fiscal 2019. But investors might want to wait for the company to execute before getting too carried away.

While new ethanol extraction equipment is expected to come online in September, that won't immediately solve the company's bottleneck. The new equipment has to be commissioned (preparation for start-up), then technicians and engineers have to gradually increase output (ramp-up) while working out all of the kinks in the processes. If this process is successful, the equipment will reach its rated capacity (steady-state phase), but the journey from commissioning to steady-state operations could take months or quarters to complete and will be accompanied by higher operating costs.

Manufacturing companies in various industries are often humbled by the ramp-up phase of a new facility. Neptune Wellness Solutions, with a market cap of less than $400 million, has to navigate the minefield of manufacturing expansion at two facilities. Investors might be better off waiting to buy the stock, at least until the business proves it can operate at the scale and margin expected.