Rewind a few years and Microsoft (NASDAQ:MSFT) was written off as a distant third-place player in the cloud computing market. Amazon (NASDAQ:AMZN) dominated with its Amazon Web Services while Alphabet's (NASDAQ:GOOG) (NASDAQ:GOOGL) Google was its scrappy second-place rival.

But things have changed a lot since then. Amazon is still the leader, but Microsoft is chipping away at its lead. It has become the second-largest cloud computing provider on a worldwide basis and is growing at a rate that surpasses its rivals. It's also operating in an environment that is projected to see double-digit growth in the years to come as more companies move processes to the cloud.

According to Gartner, the market research firm, the worldwide public cloud services market is forecasted to hit $214.3 billion this year, 17.5% higher than the $182.4 billion seen last year. Cloud system infrastructure services, is expected to enjoy growth of 27.5% in 2019, reaching $38.9 billion.

That bodes well for Microsoft. While Amazon is still the leading cloud service provider with 31.5% market share in cloud infrastructure services, Microsoft is seeing the fastest growth in that segment of the market, growing 63.6% during the second quarter. Overall, total cloud revenue for its fiscal fourth quarter ended June 30 was $33.7 billion, up 12% on a year-over-year basis.

The growth in Microsoft's cloud computing business shouldn't be too surprising for anyone who has followed the software giant over the past few years. Ever since current Chief Executive Satya Nadella came on board in 2014, Microsoft has been focused on cloud computing and mobile services. It has been pouring billions of dollars into the efforts. Today it is among the few cloud computing players that cover all the aspects of the marketplace. That means Microsoft is able to get recurring revenue from commercial and consumer customers alike.

Revenue in its commercial cloud business grew 39% to $11 billion in its fiscal fourth-quarter marking the strongest three month period for that part of the business. Microsoft's Office 365 Commercial business drove the growth, with revenue up 31% year-over-year. Microsoft doesn't break-out revenue for Azure, its cloud computing service that competes head-on with Amazon, but it's clear it is focused on displacing its rival. To achieve that end, Microsoft is providing businesses with more reasons to switch to its services. During the year, the technology powerhouse began bundling Azure with its Office products to appeal to more customers. It's a strategy that appears to be resonating. In July it announced a $2 billion deal with AT&T (NYSE:T) to move most of the telecom provider's non-network workloads to the public cloud by 2024. As part of the deal, AT&T's workforce will use Microsoft 365 cloud-based productivity and collaboration tools.

It's also forging partnerships in the cloud marketplace with the likes of Oracle, Adobe, Dell Technologies and SAP among others that round out its offerings and help it eat away at Amazon's dominance. 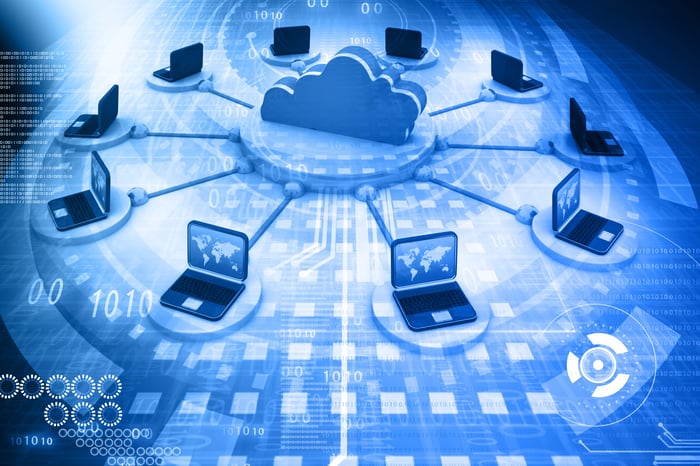 Microsoft's strong showing in the cloud market hasn't been lost on investors and Wall Street, which have been sending the stock higher over the past few years. When Microsoft reported its fiscal fourth-quarter results the stock surged in after-hours trading. Shares have come down a bit since then but is still up 40% so far this year.

Some Wall Street analysts are betting Microsoft will eventually surpass Amazon, to become the leader. In a recent research report, Wedbush Securities analyst Dan Ives said there has been an acceleration of large enterprise cloud deals during the second quarter in the U.S. and Europe and that Microsoft is poised to win many of them.

With cloud accounting for about 30% of the workloads and with Wedbush forecasting that to increase 55% by 2022, Microsoft could be poised for even more growth in the cloud computing market. As the software giant wins more customers and gains more market share, the stock should have additional growth left in it.