Stocks rose on Wednesday, buoyed by simmering tensions in Hong Kong. The extradition bill that led to protests in Hong Kong was withdrawn, raising hopes that a period of sometimes violent unrest would soon end.

For a mall-based apparel retailer, American Eagle is doing surprisingly well. Comparable sales rose 2% in the second quarter, and the company beat analyst expectations across the board. But it wasn't enough to stop investors from throwing in the towel. The stock was down about 15.1% at 1:05 p.m. EDT.

American Eagle generated second-quarter revenue of $1.04 billion, up 8% year over year and $40 million ahead of the average analyst estimate. While the core American Eagle brand suffered a 1% decline in comparable sales, the fast-growing Aerie brand notched a 16% increase. It was the 19th straight quarter of double-digit growth for Aerie. 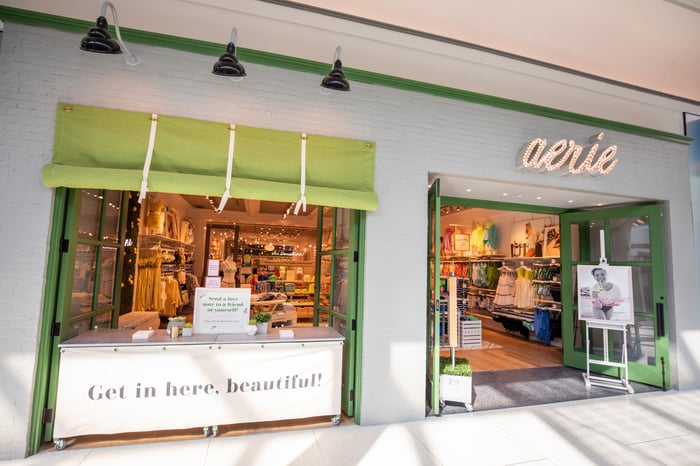 The company admitted that its results were a bit below its own expectations due to weak sales of certain seasonal categories and a delayed back-to-school shopping period. "The AE team has taken quick action to strengthen the business and we are pleased to see an improvement in third quarter-to-date sales," said CEO Jay Schottenstein.

American Eagle reported adjusted earnings per share of $0.39, a full $0.07 higher than analysts were expecting. The company expects third-quarter adjusted EPS between $0.47 and $0.49, driven by comparable sales growth in the low to mid single digits.

The ongoing trade war between the U.S. and China could be one reason for the negative reaction to American Eagle's results. Apparel from China was hit by the tariffs that went into effect on Sept. 1. These levies could hurt the company's bottom line if it's forced to absorb some of the costs.

Shares of meat processor Tyson Foods have been on a tear this year, nearly doubling since bottoming out in late 2018. But a warning from the company about "short-term challenges" in the fourth quarter has investors looking for the exit. The stock was down about 6.2% at 1:05 p.m. EDT.

"The discrete challenges we've encountered this quarter now lead us to believe we will fall short of our previously stated guidance," said Tyson CEO Noel White. For the full year, the company now expects to produce adjusted earnings per share between $5.30 and $5.75. That's down from a range of $5.75 to $6.10, which Tyson reiterated just last month.

The suddenness of this guidance cut should be concerning to investors, but the company sees at least some of these challenges not repeating in fiscal 2020. Tyson also expects more favorable market conditions next year.

Tyson stock has been a strong performer this year, but some of those gains may vanish as the company struggles to maintain the bottom line.