Now Vertex has its eyes on its most ambitious goal ever: curing type 1 diabetes. The company announced on Tuesday that it's acquiring privately held Semma Therapeutics, which focuses exclusively on developing a cure for type 1 diabetes, for $950 million. Vertex is making a big bet, but it's one that just might have an astronomical payoff. 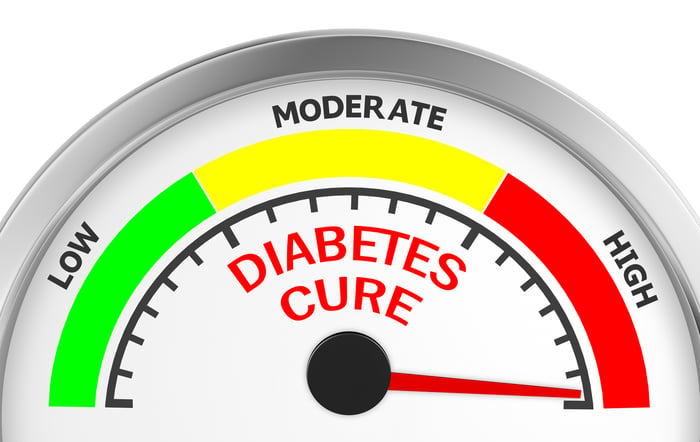 Today, type 1 diabetes is a chronic disease that can be managed by close monitoring of glucose levels and administration of insulin through shots or pumps. However, there remain significant health risks for individuals with type 1 diabetes, including eye diseases diabetic retinopathy and macular edema, a type of chronic kidney disease called diabetic nephropathy, nerve damage caused by diabetes, and increased risks of heart attack and stroke.

Semma Therapeutics hopes to go beyond managing type 1 diabetes to actually curing the disease. How? The biotech developed a process to produce stem-cell-derived islets (SC-islets) made from human pluripotent stem cells -- the types of stem cells that can develop into any type of cell. These SC-islets function just like their natural counterparts in the human pancreas by sensing glucose levels and producing the needed amount of insulin.

Semma's SC-islets have been transplanted to nonhuman primates and pigs with type 1 diabetes. The approach has successfully produced human insulin in these animals and safely controlled blood sugar levels. In addition, Semma has developed a device that encapsulates and protects the cells from being rejected by a patient's immune system.

A big bet with a potentially huge payoff

Vertex is spending a significant chunk of its cash stockpile to acquire Semma Therapeutics. But the deal appears to be a good fit. Vertex CEO Jeff Leiden said, "This acquisition aligns perfectly with our strategy of investing in scientific innovation to create transformative medicines for people with serious diseases in specialty markets."

There are currently around 1.25 million Americans with type 1 diabetes and roughly 20 million people worldwide with the disease. A study conducted by the American Association of Clinical Endocrinologists (AACE) determined that the direct medical expenses of type 1 diabetes plus indirect costs such as lost income is around $14.4 billion annually. But that cost estimate is based on the current number of Americans with type 1 diabetes. The AACE study projected that the U.S. prevalence of the disease could triple by 2050.

Vertex's $950 million bet could have an astronomical payoff if Semma's approach is successful in humans. The SC-islet cell therapy could rake in over $10 billion per year in the U.S. alone and still generate tremendous savings for the country's healthcare system. And that doesn't include the international revenue potential.

If all goes well, Vertex could have a new drug that becomes one of the best-selling blockbusters in the world. It's not surprising that Jeff Leiden said that Vertex sees "a substantial opportunity to transform the paradigm for type 1 diabetes" with its acquisition of Semma.

Of course, investing in biotechs is always risky because of the possibility that experimental therapies could flop in clinical testing. Vertex is rolling the dice on a biotech that hasn't advanced to clinical studies yet. Assuming that Semma's therapy does move into clinical studies, the odds of success will still be very low. Only 13% of endocrinology drugs that begin phase 1 clinical testing go on to win FDA approval, according to historical data compiled by the Biotechnology Innovation Organization.

What's next for Vertex

It will take years before we know whether or not Vertex's big bet on curing type 1 diabetes pays off. In the meantime, there are several key developments on the way for the company.

The biotech's monopoly in CF could be further solidified with an anticipated FDA approval of a combination of VX-445 (elexacaftor), tezacaftor, and ivacaftor by March 19, 2020. Market researcher EvaluatePharma ranks this triple-drug CF combo as the most valuable pipeline candidate in development with a net present value of $20 billion.

Vertex is also making progress outside of CF. The biotech plans to advance experimental AATD drug VX-814 into a phase 2 clinical study for patients with two Z mutations, with data from this study expected next year. The company also has early stage studies in progress for its experimental therapies targeting beta-thalassemia, sickle cell disease, and rare kidney disease APOL1-mediated focal segmental glomerulosclerosis (FSGS).