Shares of Ardelyx (NASDAQ:ARDX) were down 16.8% as of 11:42 a.m. EDT on Wednesday. The drop came after the biotech stock soared Tuesday following its announcement of positive results from a late-stage study evaluating its lead experimental drug candidate, tenapanor.

Ardelyx didn't announce any further news Wednesday, so the most likely reason for the decline is that investors are taking profits. 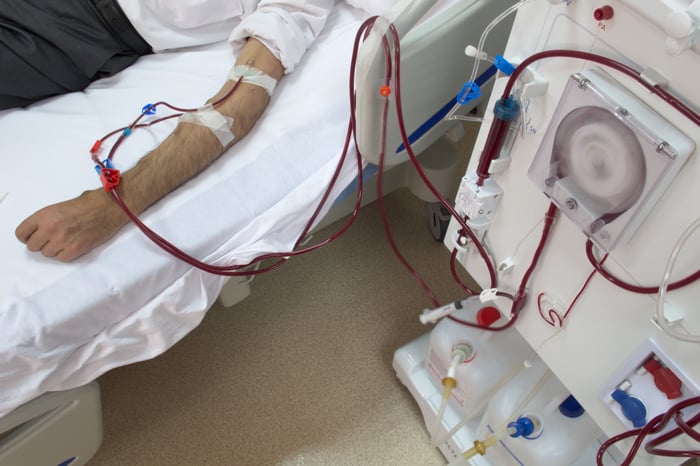 High volatility comes with the territory when investing in biotech stocks, especially clinical-stage biotechs like Ardelyx. But in many cases, the up-and-down swings don't really mean much. It's nearly always best to focus on the reasons for buying (or not buying) a stock in the first place, and ignore the short-term share price fluctuations.

The main reason to consider investing in Ardelyx is its tenapanor. The results announced on Tuesday -- from a late-stage study of the drug in combination with phosphate binders in treating patients with chronic kidney disease (CKD) who are on dialysis -- make its prospects for approval look brighter than ever. Ardelyx reported that tenapanor easily met its primary endpoint of reducing serum phosphorus by a statistically significant level. The drug also met all of the study's secondary endpoints.

Ardelyx CEO Mike Raab said that he was "thrilled with the positive results" from the Amplify study. While the executives of biotechs usually try to spin clinical results in the best light possible, Raab's enthusiasm appears justified. Hyperphosphatemia (elevated phosphorus levels) is a serious condition in CKD patients that impacts around 745,000 people worldwide. A new therapy for it is much needed.

While the results from the Amplify study certainly present good news for Ardelyx, the company still has more hurdles to jump. The biotech expects to announce results from its second late-stage study of tenapanor as a monotherapy in the fourth quarter. If those results are also positive, Ardelyx plans to file for U.S. approval for tenapanor as a monotherapy and as a combination therapy with phosphate binders for treating hyperphosphatemia.