Fashion manufacturer, wholesaler, and retailer Oxford Industries (NYSE:OXM) will release its second-quarter fiscal 2019 results on Sept. 11 after the closing bell. The owner of popular lifestyle brands including Tommy Bahama, Lily Pulitzer, and Southern Tide has seen its shares shed roughly 22% of their value over the last 12 months due to a difficult environment for discretionary consumer stock investments focused on retail sales. However, "OXM" stock has managed a 2% share price increase year to date and has potential for further appreciation -- if earnings end up pleasing investors next week. Below, we'll cover critical numbers and themes that will illuminate what investors should expect when the company issues its scorecard for the past three months.

The context for earnings: first-quarter numbers and second-quarter projections

It's important to recognize that Oxford is reporting on the last three months after enjoying decent momentum in its initial quarter of fiscal 2019. In the first quarter, net sales improved by 3% year over year to $282 million, while earnings per share (EPS) rose roughly 5% to $1.29. Both numbers landed near the top of the expected ranges that the organization had previously provided to investors. In addition, comparable sales increased 2%, marking Oxford's ninth consecutive quarter of positive "comps."

For the second quarter, management has advised investors to expect net sales of $300 million to $310 million, against $302.6 million booked in the second quarter of fiscal 2018. Per-share earnings are projected to fall within a band of $1.79 to $1.89, versus EPS of $1.61 in the comparable prior-year quarter.

As long as Oxford can meet its own second-quarter targets, it should be in a firm position to maintain or increase full-year earnings guidance. Currently, Oxford expects fiscal 2019 net revenue of $1.135 billion to $1.155 billion, and it's aiming for 2019 EPS of between $4.42 and $4.62. 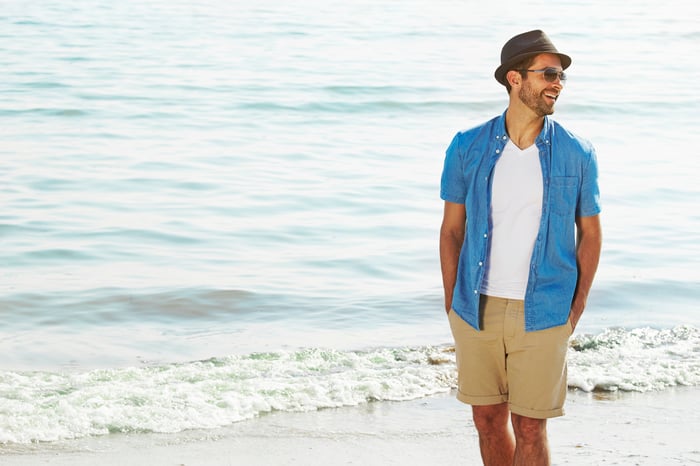 Key themes investors will be following

Oxford's ability to surpass its own expectations will rest largely on the successful implementation of a handful of strategic imperatives, some of which I outlined in detail in June. First, store selection has become extremely important to both management and investors, as brick-and-mortar stores placed indiscriminately are at risk of weak sales and poor traffic given the rise of online sales in the clothing industry.

Oxford Industries tends to take extreme care with its real estate investments -- it operates just 230 of its own stores globally. The company prefers to sign leases in higher-end malls and newer retail complexes for its signature Tommy Bahama and Lily Pulitzer locations. Shareholders will look for management to provide detail on store-opening unit projections and locations in the back half of the year when Oxford reports next week.

In addition, shareholders will also seek updates on the company's online direct-to-consumer plans for the next two quarters. The third quarter is historically Oxford Industries' slimmest period due to seasonality in the Tommy Bahama and Lily Pulitzer brands. Yet the fourth quarter tends to feature heavy online sales and promotional activity in both labels; indeed, e-commerce now makes up one-fifth of total annual company sales.

Finally, investors will look for data points on an important trend related to the company's revenue makeup. Like other fashion-based manufacturers, Oxford Industries is vulnerable to the changing (and rather bleak) fortunes of mass-market retailers, particularly mall-based chains and department stores. The company has revamped its wholesale approach over the last several quarters, becoming more selective in its relationship with specialty retailers while attempting to decrease reliance on this channel overall.

In the near term, the continuation of this trend is almost as important to investors as the company's ability to meet its quarterly earnings targets. The more business Oxford can shift to its own stores and online channels, the less exposed it will remain to ongoing mayhem in the retail sector. Increased self-reliance will support the manufacturer's long-term viability, so investors should hone in on revenue composition when Oxford reveals its results on Sept. 11.