Shares of Albemarle (NYSE:ALB) fell over 12% last month, according to data provided by S&P Global Market Intelligence. The lithium producer reported solid second-quarter and first-half 2019 operating results. Management raised full-year 2019 adjusted earnings per share (EPS) guidance to $6.45 at the midpoint, up from a previous expectation of $6.30 on the same basis.

But investors were a little more focused on a decision to indefinitely delay certain lithium production expansion projects. Albemarle cut its production outlook for the early 2020s by as much as 35% compared to previously disclosed expectations. Once considered a formidable growth stock, shares have now fallen 50% since the beginning of 2018. 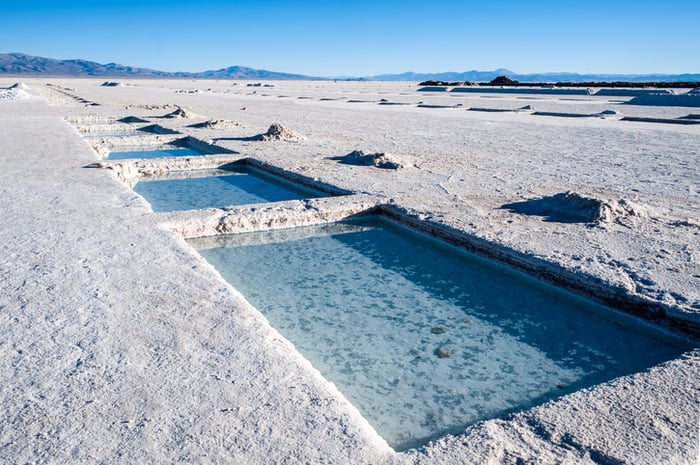 China plays an outsize role in determining prices for many commodities, including lithium. The country is home to 57% of global lithium demand and has driven consumption significantly higher in recent years. That pushed prices past $20,000 per metric ton of lithium carbonate equivalent (LCE) and led to a surge of investment to bring new mines on line from South America to Australia.

However, China's slowing economy has sapped demand for consumer products and electric vehicles (EVs) and forced Beijing to reduce subsidies for EVs earlier this year. Lithium prices have fallen below $10,000 per metric ton of LCE as a result.

That actually hasn't had much effect on Albemarle, which sells a significant portion of its lithium production in long-term supply agreements with price controls. In fact, the business reported 2% growth in lithium segment sales and flat adjusted EBITDA margin in Q2 compared to the year-ago period.

Albemarle is doing the responsible thing. Reducing production expansion ambitions will also significantly decrease capital expenditure requirements in the near term and allow it to achieve cash flow positive operations in 2021. The world is still expected to require significant lithium supply expansion, however, and the company still owns the resources to respond -- they'll just remain in the ground for a few years longer than previously expected.