Shares of pipe, valve, and fitting distributor MRC Global (NYSE:MRC) dropped as much as 11% in early trading and are down 8.9% as of 11:30 a.m. today. The stock drop comes on the heels of the company's announcing it is lowering guidance for the third quarter.

According to the company's press release, management is lowering its financial guidance for the third quarter. It was initially expecting third-quarter revenue to increase 2% to 4% compared to the prior quarter, but now management expects a sequential decline of 4.5% to between $930 million and $950 million. This is especially discouraging because, as management noted, the third quarter has historically been the seasonal high for sales. 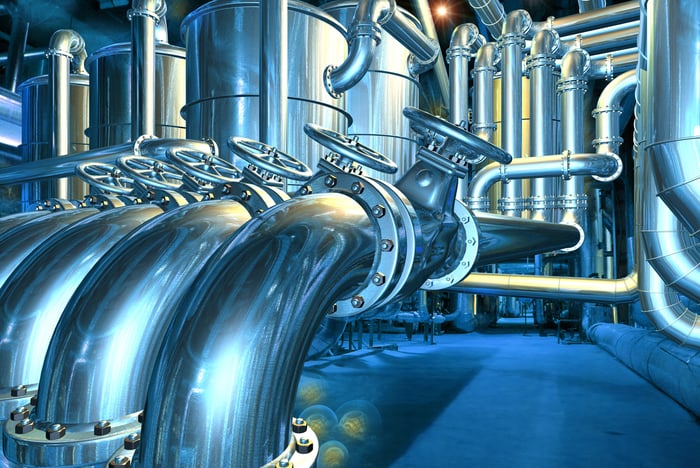 Management attributed the guidance change to "continued reductions in customer spending levels and lower demand in the third quarter, primarily in the midstream and upstream sectors in the U.S. and the upstream sector in Canada."

This also means that management will let go of more employees than initially anticipated. While no specific numbers were given, management simply said that it would be "implementing further operating cost reductions in the second half of the year, above the initial 125 to 150 headcount reductions previously forecasted."

If it wasn't already abundantly clear that the North American oil and gas industry is in a rough patch, this is further confirmation. MRC's role as a supplier of parts that are critical for connecting a well to North America's pipeline network as well as the parts to expand those oil and gas highways is one of those signs that companies aren't spending as much money as they were before.

With many oil and gas producers struggling to generate enough cash from operations to cover their ambitious budgets, lenders and investors are less excited to help fill that budgetary gap. We could be headed for major consolidation in this industry. Until that happens, though, companies like MRC and other suppliers are going to suffer.