MRC Global's (NYSE:MRC) fourth-quarter results had a lot of moving parts that muddled the numbers a bit. While the company reported a profit, that was entirely due to the recently signed tax legislation in the U.S. since a seasonal slowdown would have otherwise kept it in the red. That said, the overall trend is that the company's financial results are improving thanks to the continued recovery of the oil and gas market. 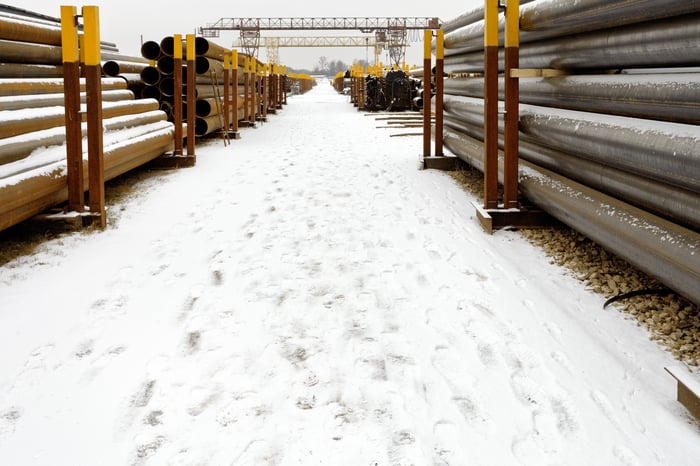 CEO Andrew Lane commented on the quarter by saying:

Fourth quarter results came in where we anticipated, sales were down 6% sequentially due to seasonality primarily in the midstream business and up 26% over the same quarter a year ago as a result of market improvements and solid execution, which resulted in Adjusted EBITDA of $43 million in the fourth quarter.

As Lane notes, the company anticipated that sales would slip in the quarter, not due to any new industry headwinds but from seasonality since it's hard for midstream companies to lay new pipes when the ground is frozen.

MRC Global expects its financial results to keep recovering in 2018. Lane pointed out that the company "continued to defend and gain market share including signing multi-year framework agreements with three integrated oil companies" As a result, "we are well positioned for double-digit revenue growth in 2018 with our customer contract positions in the improving oil and gas market," according to the CEO. In addition, because MRC Global is a U.S. taxpayer, Lane said that "the lower rate is expected to provide earnings and cash flow benefits in 2018." However, he also said that its "capital allocation plans have not changed" and that it "intends[s] to invest in the business for growth and return cash to shareholders as we continue to execute our share repurchase authorization."