A few days before announcing second-quarter results, Etsy (NASDAQ:ETSY) -- the e-commerce website offering a marketplace for independent retailers -- enjoyed a stock price north of $70. After quarterly results that it reported on Aug. 1 failed to meet expectations for revenue, however, the stock dropped more than 20% over two days, and at the time of this writing is hovering around $50.

Despite the big drop, the stock still sports a lofty P/E ratio of 58. So is Etsy still a stock to buy?

Not your typical e-commerce site

In order to address this question, it's important for investors to understand Etsy's business model relative to brick-and-mortar retailers and e-commerce competitors. Unlike typical retail companies, Etsy doesn't sell products. It runs a marketplace by providing a software platform that enables independent retailers to sell their goods to consumers, and takes a cut of those sales. Think of Etsy as the place buyers and sellers meet to perform transactions. 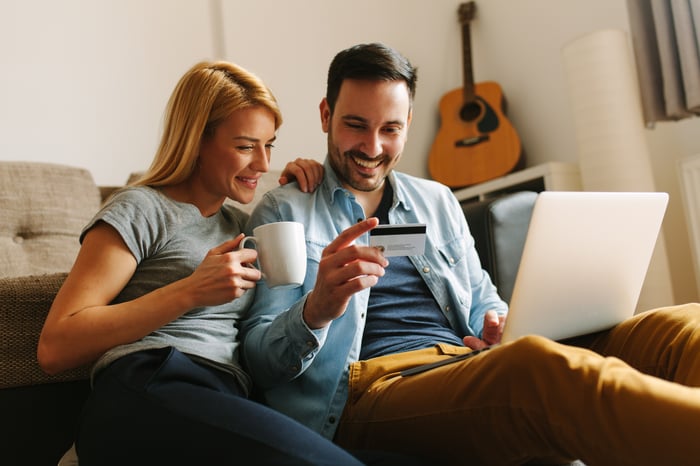 Because the company isn't directly buying and selling goods, it doesn't have to worry about procuring product at low wholesale prices to maintain margins, or sell at unprofitable prices to keep pace with low-price online retailers, which other traditional retailers must do. Instead, it can concentrate on maintaining and growing its robust marketplace through technology.

That's where Etsy's strengths shine. In the most recent quarter, the company's platform supported 43 million active buyers and 2.3 million active sellers engaging in $1 billion in gross merchandise sold (GMS), a measure of the total value of products sold. This translated to a 21% year-over-year increase in GMS.

Moreover, Etsy has chosen to focus on supporting independent retailers of handcrafted, vintage, and other unique products, a niche where it has a leadership position. The company estimates the total addressable market (TAM) in this niche to be about $100 billion, of which it currently captures just 4%.

As a result, Etsy believes it's still in the early stages of market penetration, meaning it has plenty of room to grow. This was reflected in the company's raising 2019 revenue guidance from 30-32% growth to 32%-34% growth.

Supporting the shifts in shopping

Etsy's other advantages include its support of independent retailers. Consumer research shows shoppers prefer independent sellers over traditional, big-brand retailers in a quest for unique and socially conscious products rarely available at the bigger stores.

Etsy and its sellers also attract millennials, the largest generation, who are leading the charge with their preference for businesses that put corporate responsibility ahead of profits. On this front, Etsy is, for example, working to reduce its carbon footprint through actions like moving toward using only renewable electricity to power its offices and being the first global e-commerce company to offset carbon emissions generated from shipping by funding projects that reduce carbon emissions.

With a desire for more engaging, personal retail experiences, millennials have raised the bar for retailers in several ways, and independent sellers like those on Etsy have been able to capitalize on these consumer shifts.

Industry trends have propelled Etsy's rise and, for now, continue to give the company an edge over larger retailers who are slow to adapt. The millennial generation, now roughly in the prime shopping age of 25-35, is poised to provide an outsize influence to the retail industry for years to come, and that's a good thing for Etsy.

Another factor propelling Etsy's success is its launch of new initiatives for the people using its platform. While the company enjoyed a 37% year-over-year revenue increase in the second quarter, generating $181 million, that doesn't mean Etsy is resting on its laurels. During its Q2 earnings call, Etsy unveiled new initiatives that set it up for further revenue growth.

Etsy Ads introduces streamlined advertising capabilities to its retailers. With millions of sellers competing for consumer eyeballs, an advertising product creates opportunities for sellers to stand out and reach customers. Etsy Ads will improve upon the company's current, clunky advertising options, which -- despite their onerous nature born out of Etsy's cobbling together its in-house solution with Google Shopping -- helped contribute to a 16% year-over-year increase in the company's service revenues in the most recent quarter. Etsy believes its new, easier-to-use ad platform is poised to improve upon these results.

Another new offering is free shipping on orders of $35 or more. Free shipping removes a barrier for shoppers while also increasing the average order size as shoppers will buy more to hit the $35 threshold.

Etsy performed tests of the free shipping concept and witnessed good results. And while free shipping is expected to increase sales, it won't add costs to Etsy as the shipping costs are taken on by the sellers. To incentivize its retailers, Etsy's platform will grant preferential treatment to those with free shipping, such as showing these sellers first in search results.

Etsy's unique position in the retail space, along with its initiatives to drive improved results for sellers sets the company up for success. Investors, too, are supported by Etsy as the company has been involved in a share repurchase program since Q4 2017, resulting in $172.5 million spent through Q2 2019. Reducing share count helps boost earnings per share, which, for the 12 months ending June 30, were $0.86, a 21% increase year-over-year.

All of these factors add up to the potential for Etsy to regain its lost ground. As the digital segment of the retail industry continues its growth, Etsy is well-positioned to benefit.