Shares in mining companies slumped across the board in August, according to data provided by S&P Global Market Intelligence. Whether it was copper-focused companies like Southern Copper (NYSE:SCCO), Freeport-McMoran (NYSE:FCX) and Antofagasta, or miners with broader exposure like Rio Tinto (NYSE:RIO) (iron ore, aluminum, copper, and coal) and BHP Group (NYSE:BHP) (iron ore, copper, coal, and petroleum), the result was the same: a stock price decline in the low to mid teens.

The month completed yet another volatile period that left investors debating whether metals and mining commodity prices were likely set to stagnate or were merely dipping en route to a long-term sustained recovery following the slump in 2015-2016. 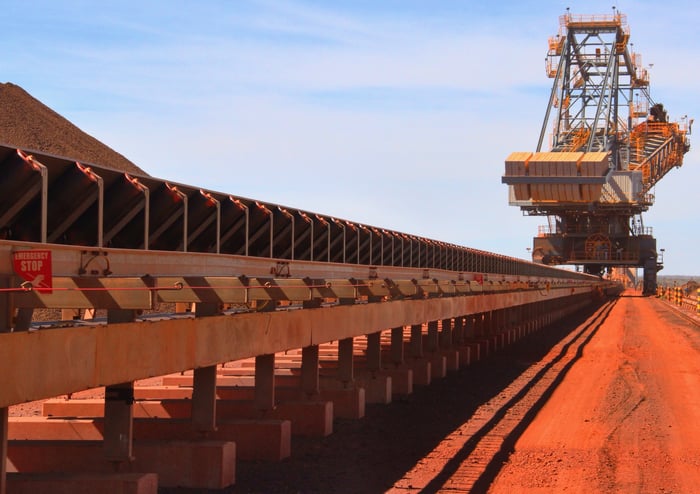 Of course, this is all part of a wider debate on the direction of the global economy and the ongoing trade conflict. As you can see in the chart below, copper prices and the metals and minerals index (a weighted average of aluminum, copper, iron ore, lead, nickel, tin, and zinc prices) have dipped lately, and it's no coincidence that leading indicators of the economy -- such as the Institute for Supply Management (ISM) Purchasing Managers Index (PMI) in the U.S. and the IFO Business Climate Index in Germany -- have fallen, too.

August's PMI reading of 49.1% indicates that the manufacturing economy is contracting -- not great news for miners -- and according to the ISM, the historical relationship between the PMI and the overall economy indicates growth of just 1.8% in U.S. real GDP. Meanwhile, Germany's GDP declined slightly in the second quarter, and China's growth rate is slowing with ongoing concerns over the trade conflict. 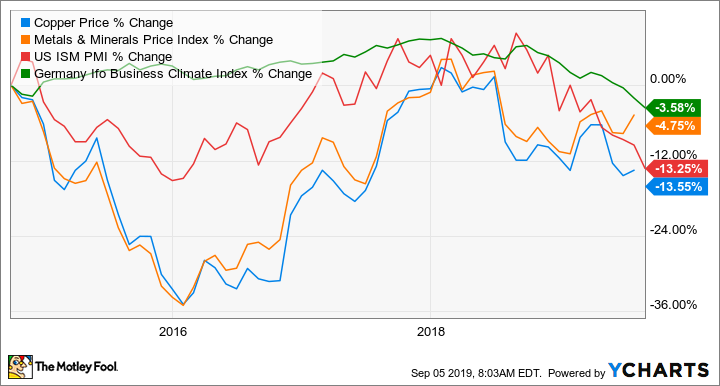 China is a particular worry for the miners, as it's the largest single producer of steel (the main use of iron ore) in the world -- the country produced 51% of the world's steel in 2018, nine times that of the next largest producer, India. Given the importance of iron ore and coal to Rio Tinto and BHP, there's simply no way you can be bullish on the stocks over the long term without a positive view on China. Similarly, copper is one of the most economically sensitive metals due to its broad-based use in industry, so any fears over global growth will manifest themselves in the price of the metal and ultimately in Southern Copper's and Freeport-McMoran's share prices. (Incidentally, in case you are wondering about gold, it tends to have its own dynamic.)

Unfortunately, it's very hard to know how the trade dispute will be resolved and whether the current downturn in confidence will encourage business leaders to sit on their hands regarding spending -- thereby exacerbating the economic slowdown.

What we do know is that outside of these considerations, miners, and the companies that sell equipment to them, like Caterpillar (NYSE:CAT) and Cummins (NYSE:CMI), have been broadly upbeat on underlying conditions and the potential for an extended recovery.

The level of confidence is evident in the capital spending programs of the leading mining companies. As you can see below, the slump in commodity prices in 2014-2016 caused a significant reduction in spending, which led to supply/demand imbalance, which eventually contributed to a recovery in prices in 2016. 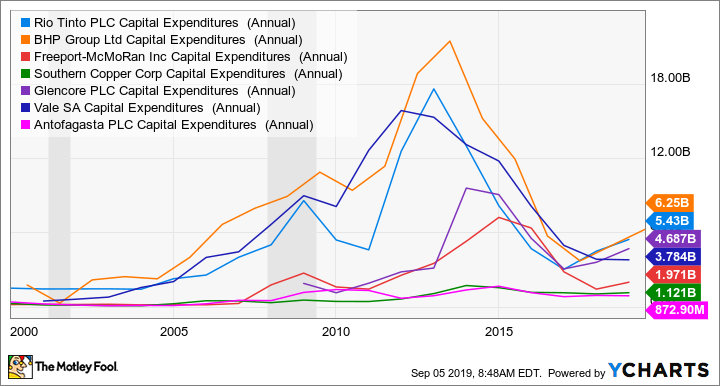 Surveying the recent mining company earnings presentations, it's clear that their spending plans and confidence in the near term remains in place -- in fact, Freeport-McMoran raised its 2019 and 2020 plans to $2.6 billion from $2.5 billion. That's good news and suggests that if the global growth outlook improves in the coming quarters, there should be upside potential for the sector.

In other words, if you are agnostic on the economic outlook, the recent dip in mining stock prices is probably creating a good buying opportunity. However, for those worried about global growth prospects and China in particular, the stocks are worth avoiding.