It's been a rough few years for the global smartphone industry, which has seen unit volumes plateau as the market matures and upgrade cycles continue getting longer. The slowdown has hit premium devices the hardest, which is partially why Apple (NASDAQ:AAPL) has been so laser focused on growing its services business in recent years. The Cupertino tech giant is reportedly planning to launch an affordable mid-range iPhone early next year, which could help spur sales.

Market researcher IDC has released new estimates on what to expect for the smartphone market. 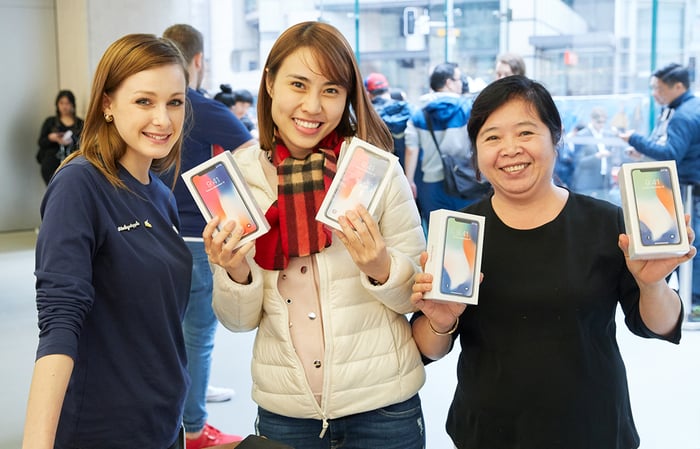 Total smartphone shipments are expected to decline 2.2% this year to approximately 1.37 billion before increasing a modest 1.6% in 2020. Alphabet (NASDAQ:GOOG) (NASDAQ:GOOGL) subsidiary Google is expected to grow Android's worldwide market share to 87% this year, up from 85% in 2018, thanks in part to 5G adoption. That will put Apple's iOS market share at 13%.

"Consumers continue to hold their devices for lengthier times making sales difficult for the vendors and channels alike," IDC research analyst Sangeetika Srivastava said in a statement. "However, expectations of aggressive promotions and offers in the second half of 2019 aimed at helping to clear out any channel inventory and get consumers excited about the next wave of smartphone technology should steer the market back toward renewed growth."

The average upgrade cycle in the U.S. is now 33 months, according to separate estimates from Strategy Analytics released last month.

Optimism around 5G is also helping to mitigate macroeconomic fears around escalating trade tensions between the U.S. and China. 5G shipments are expected to take off in 2020 and reach 123.5 million -- 9% of smartphones shipped next year. That proportion should proceed to climb to 28% of smartphones by 2023, according to IDC's forecast.

"The anticipation of 5G, beginning with smartphones, has been building for quite some time but the challenges within the smartphone market over the past three years have magnified that anticipation," IDC's Ryan Reith added. The 5G ramp won't be as sharp as 4G since the market has changed dramatically, according to Reith.

Apple is widely expected to introduce a 5G iPhone in 2020 following its settlement with Qualcomm earlier this year that secured 5G modem supply. IDC expects Apple's iPhone volumes in 2019 to fall 15% to 177.9 million, since the Mac maker is going to be later than rivals in adding 5G technology, but IDC notes that the company will be able to get a better understanding of 5G market conditions for when it does launch its 5G handsets.

Apple is hosting its annual iPhone event tomorrow, at which the company is expected to unveil three new models for 2019.