After a couple of years of severe earnings pressure, Mexican budget airline Volaris (NYSE:VLRS) began to turn things around about a year ago. While the carrier posted a big loss during the first nine months of 2018 -- and its operating margin deteriorated by more than 6 percentage points year over year -- its operating margin reached 4.5% in the fourth quarter, up from 0.3% in the prior-year period.

The turnaround has accelerated this year. Volaris' operating margin improved by more than 10 percentage points in the first half of 2019, reaching 4.4%. Furthermore, all signs point toward continued margin expansion in the back half of the year, with more room for improvement in 2020 and beyond.

During Volaris' second-quarter earnings call, management projected that margin expansion would continue in the third quarter, despite somewhat tougher year-over-year comparisons. Strong demand and rising ancillary revenue are driving unit revenue growth, even though fares remain low in many markets.

Traffic results for the summer season validate management's bullish outlook. In July, traffic surged 17.2% on a 17.1% increase in capacity, with strong growth in both the domestic and international markets. This caused Volaris' load factor -- the percentage of seats filled with paying customers -- to remain at 88.8%, roughly flat year over year.

The carrier's results in August were even more impressive. Traffic surged 19.8% on 15.2% capacity growth. As a result, Volaris' load factor improved by more than 3 percentage points from where it stood in August 2018, reaching 83.4%. 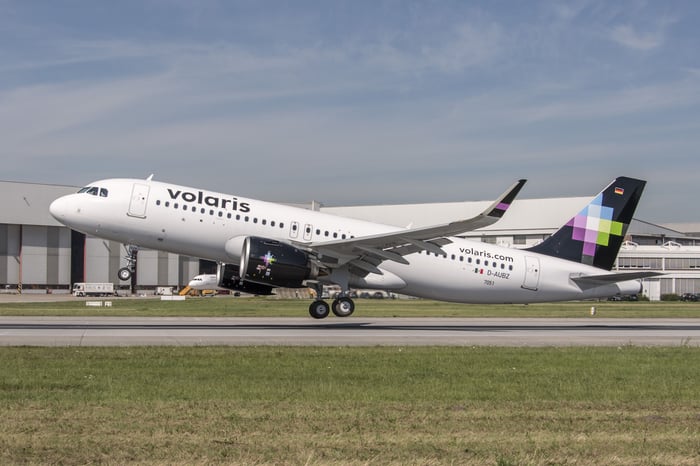 Because it is steadily reducing its unit costs, Volaris should be able to drive solid margin expansions even with modest unit revenue growth. In the first half of the year, nonfuel unit costs fell by a little more than 5%. This more than offset an uptick in fuel expense, which was driven by an increase in fuel transfer costs in Mexico.

There's a good chance that Volaris will be able to continue cutting its nonfuel unit costs in the third quarter. The strong demand environment has allowed the carrier to maintain aircraft utilization at a high rate, and it's disciplined about managing its costs.

Furthermore, fuel cost pressure is likely to abate. Volaris signed new purchase agreements last quarter that will reduce its fuel transfer costs by a third. The market price of jet fuel is also significantly lower than it was at this time last year. Finally, the addition of new planes to Volaris' fleet is driving steady gains in fuel efficiency.

In recent years, Volaris has gained market share steadily. It now carries more passengers in Mexico than any other airline, having surpassed former market leader Aeromexico earlier this year. Its top rivals, Aeromexico and Interjet, have both been losing money recently, constraining their ability to grow.

Volaris' high growth rate has allowed it to widen its cost advantage, and it's well-positioned for further cost improvements in the coming years. It will more than double the proportion of Airbus A320neo-series jets in its fleet by the end of 2022, and it has locked in favorable financing terms for those aircraft.

Meanwhile, Interjet is struggling to survive. It has been consistently unprofitable for many years, and is now embroiled in a tax dispute with the Mexican government. An unfavorable ruling would further stress Interjet's weak balance sheet. If that airline collapses at some point in the next few years -- which seems like a plausible outcome -- Volaris will be in prime position to further consolidate its  lead in the Mexican market.