Don't call GW Pharmaceuticals (NASDAQ:GWPH) a cannabis stock around the company's CEO, Justin Gover. He said at the Morgan Stanley Global Healthcare Conference on Wednesday that it's "frustrating" when GW is listed among cannabis stocks. Gover stated emphatically, "We're a biotech company."

Of course, GW Pharmaceuticals is often labeled a cannabis stock or marijuana stock, and for a good reason: The company focuses on developing cannabis-derived drugs. But Gover's point is that GW's business and regulatory environment is much different than that of most companies whose stocks are grouped in the cannabis stock category.

Gover didn't vent for too long at the Morgan Stanley conference, though. Here are four other things he said that investors interested in GW Pharmaceuticals will want to know. 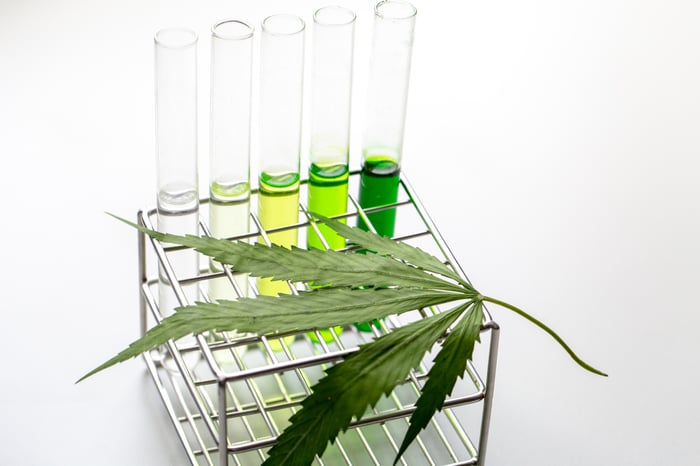 GW's cannabidiol (CBD) drug Epidiolex has gotten off to a roaring start in the U.S. The company reported that sales for Epidiolex totaled $68.4 million in the second quarter, more than double the level achieved in the previous quarter. Over 12,000 patients have received Epidiolex since GW launched the drug in the U.S. market in late 2018.

Gover said that he expects sustained strong sales growth for Epidiolex in treating Dravet syndrome and Lennox-Gastaut syndrome (LGS). However, he cautioned that the rate of growth will cool down somewhat.

There was a tremendous pent-up demand for Epidiolex when it first hit the U.S. market. Gover said that the initial wave of patients is past and that GW is in "a different phase" now. But he doesn't think that sales of Epidiolex will be hurt by patients using over-the-counter CBD products because insurers will only pay for FDA-approved medications.

2. Optimistic about European launch of Epydiolex

There has been good news and bad news with respect to GW Pharmaceuticals' plans to launch Epidyolex in Europe. (Note: The European brand name is spelled slightly differently from the drug's U.S. brand name.) First, the good news: The Committee for Medicinal Products for Human Use (CHMP) recommended that Epidyolex be approved by the European Medicines Agency (EMA). The bad news, however, was that the United Kingdom's National Institute for Health and Care Excellence (NICE) thinks that the price tag for the drug is too high.

Gover stated that he's optimistic that NICE will recommend the use of Epidyolex in the U.K. when it announces its final guidance later this year. He said that the company plans to launch the drug in France, Germany, and the U.K. in quick succession, assuming it wins EMA approval as expected. GW anticipates rolling out Epidyolex in Italy and Spain around the middle of 2020, followed by launches in other European countries.

The market dynamics in Europe are different than the U.S. Gover said that European reimbursement systems make a large influx of patients at the outset less likely. He thinks that there will be a "more gradual adoption in Europe."

The oral solution of Epidiolex in treating Dravet syndrome and LGS is just the beginning. Gover said that GW fully expects more indications will be approved for the drug. He also said the company is developing new formulations for Epidiolex, including capsules.

GW could win FDA approval for Epidiolex in treating tuberous sclerosis complex (TSC) as soon as next year. Gover said that an approval for the drug in TSC on top of its current approved indications could cause physicians to view Epidiolex as "a broad spectrum anti-seizure medication."

The company is also conducting a phase 3 clinical study evaluating Epidiolex in treating rare genetic neurological disorder Rett syndrome. Gover said that it will probably be a couple of years before results from this study are available.

While investors are rightfully focused on the potential for Epidiolex, Gover stated that GW Pharmaceuticals "isn't a one-product company." Sativex is already approved in multiple countries outside of the U.S. in treating multiple sclerosis spasticity. Gover said that the drug is "one to watch" as GW pursues obtaining FDA approval as well.

He stated that the company will announce more details on its plans for Sativex next year. A clinical study is cranking up to gather additional data needed to support a U.S. filing for the drug.

In addition, GW's pipeline includes several other cannabinoids in development. Gover said that a "golden era for cannabinoid science" could be underway. And he wants investors to know that GW Pharmaceuticals has a unique role in this new era.