Investors punished the stock of electronic agreement software provider DocuSign (NASDAQ:DOCU) following its fiscal first-quarter 2020 results back in June. Conversely, the market rewarded the company's shares exuberantly after its fiscal second-quarter 2020 earnings release on Sept. 5. Below, we'll parse three comments made by management during the company's recent earnings conference call that illuminate both DocuSign's potential, and executives' perspective on how its results should be analyzed.

1. The Agreement Cloud is an unqualified success

Earlier this year, we introduced DocuSign Agreement Cloud. It is the umbrella for our suite of more than a dozen products and over 350 pre-built integrations, all to help organizations connect and automate the entire agreement process from preparing, to signing, acting on, and managing their agreements.

Agreement Cloud represents DocuSign's extension beyond its core e-signature product, and is geared toward helping organizations gain efficiency in what the company labels "systems of agreement." DocuSign executives argue that enterprises of every size need a system to manage and automate both external and internal agreements. The company's purchase of SpringCM in December 2018 has improved its capability to offer cloud-based contract life-cycle management.

Launched in the first quarter, the Agreement Cloud is helping to boost DocuSign's revenue, which jumped 41% year over year in the second quarter. The platform has the potential to significantly increase annual contract value with larger customers. To illustrate, Springer cited the example of "one of the world's largest energy companies," which is using the platform to simplify its sales process.

According to Springer, the energy company is now able to complete sales agreements that formerly took days (or even weeks) to complete in a matter of minutes. The unnamed energy company is reportedly projected to save tens of millions of dollars annually by using DocuSign's Agreement Cloud. While this is perhaps a cherry-picked example, it nonetheless provides investors with an idea of the platform's utility to the multinational enterprises that can award long-term, recurring subscription contracts to the software-as-a-service (SaaS) innovator. 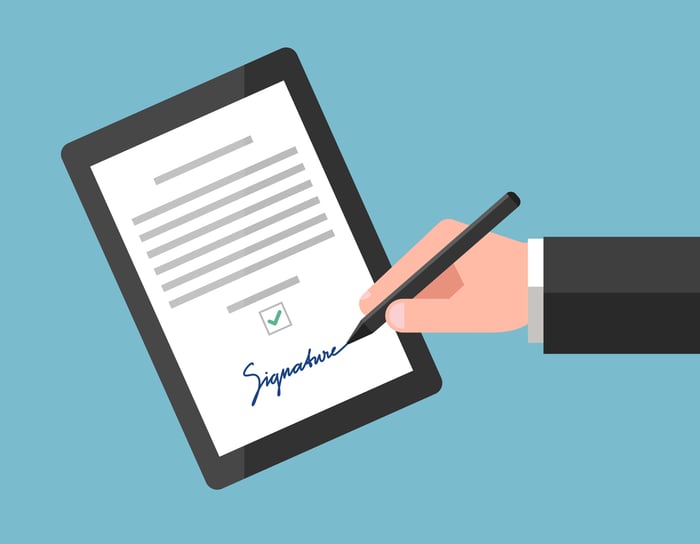 Most notably, this quarter we added DocuSign Rooms for Mortgage, a solution that helps mortgage lenders accelerate closing time and improve the borrower experience. It provides a secure digital workspace for everyone involved in the mortgage. It's actually flexible enough to support traditional closings via pen and paper, as well as drive fully digital closings and hybrid closings as well.

The CEO zeroed in on a time-intensive process -- the handling of mortgage documentation from origination through closing -- as an example of industry-specific products DocuSign can offer in order to swell its total addressable market (TAM).

Springer said that it costs thousands of dollars for a lender to process a mortgage, when factoring in required paperwork such as title documentation. DocuSign's solution automates many of the steps in the mortgage lending process. While specialized digital "rooms" for conducting secure due diligence and transaction analysis have been common in commercial real estate dealmaking for several years, DocuSign's product is aimed at the massive residential mortgage market, and represents a lucrative niche for the company. Again, a vertical industry product like Rooms for Mortgage illustrates DocuSign's TAM, and provides some support for the company's assertion that its TAM stands at well over $25 billion.

3. Look at billings on a rolling basis

I think you summarized it correctly, which is in any particular quarter you can have that particular statistic [billings] affected by timing and other things. And so, we do look at it on a rolling basis. And in quarters where it's a bit lower, we don't want that over-interpreted, [and] in a quarter like this, we don't want the 47% over-interpreted, either. I think in fairness, looking at that blend which takes away some of the noise of intra-quarter movement of deals that closed in one week versus another ... the rolling average [gives] you a better indication of where the core growth is going.

Investing in technology-oriented equities can be a volatile business. As I hinted at the outset of this article, only last quarter, investors panned DocuSign stock after quarter-over-quarter growth in billings (i.e., revenue plus the change in deferred revenue) of 27% was deemed a bit anemic for a rapidly expanding software company.

This quarter, the company reported billings of $252 million, a 47% year-over-year increase. This reported surge was a primary factor behind a 36% leap in shares since the Sept. 5 earnings release.

In the excerpt above, in response to an analyst's question, Sheridan essentially warns investors that timing differences make quarter-to-quarter comparisons of billings growth tricky. The flow of billings often depends on new product introductions, and sales cycles tied to product innovation can sometimes drag on longer than anticipated.

Of course, Sheridan isn't trying to understate recent success -- averaging the first two fiscal quarters reveals year-over-year billings growth of roughly 34%. But keeping a "rolling view" that averages several quarters at a time removes uncertainty around billings fluctuations. And for the long-term investor, this bird's-eye view puts the seemingly quarterly whiplash around DocuSign's results into perspective.