Shares of Rite Aid (NYSE:RAD) were sinking by 16.7% as of 11:10 a.m. EDT on Thursday. The decline came after Deutsche Bank analyst George Hill initiated coverage on the retail pharmacy stock with a sell rating and a one-year price target that was 48% lower than Rite Aid's closing price on Wednesday.

Analysts' buy and sell ratings and their price targets usually aren't anything for investors to get too worked up about. However, it is important to understand the reasoning behind the analysts' perspective. 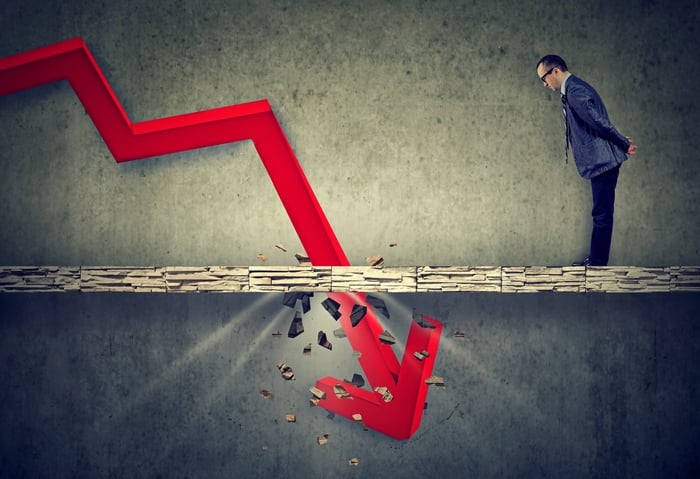 In this case, Deutsche Bank's Hill is skeptical about Rite Aid's regional strategy. He also thinks that reimbursement pressure could continue to weigh on the company, which is already experiencing a decline in earnings before interest, taxes, depreciation, and amortization (EBITDA).

Hill is certainly on point with the challenging reimbursement environment and Rite Aid's falling EBITDA. Rite Aid CEO John Standley opened his remarks in the company's fiscal 2020 first-quarter conference call in June by bringing up the negative impact of reimbursement pressure on Rite Aid's retail pharmacy business. The company readily acknowledged that this environment caused its EBITDA to fall. It's also fair to call into question Rite Aid's strategy of focusing on regional health plans.

But is the skepticism of a Wall Street analyst enough to justify a double-digit percentage drop? Not really. Anyone who follows Rite Aid should already be aware of the significant issues the company faces.

Investing in healthcare stocks involves a lot of uncertainty right now with changing industry dynamics. That's especially true with retail pharmacy stocks. And the uncertainty is even more elevated with Rite Aid because it's competing against larger rivals that are in better financial shape.

Investors are probably better off staying on the sidelines with Rite Aid rather than use today's decline to buy on the dip. Even if analysts' opinions shouldn't have such a major impact on stock prices, their underlying concerns can be valid. That appears to be the case with Deutsche Bank's take on Rite Aid.