Please ensure Javascript is enabled for purposes of website accessibility
Log In Help Join The Motley Fool
Free Article Join Over 1 Million Premium Members And Get More In-Depth Stock Guidance and Research
By Justin Cardwell – Sep 14, 2019 at 11:24AM

Warren Buffett added to his Goldman Sachs position in 2018. Here's why you should too. 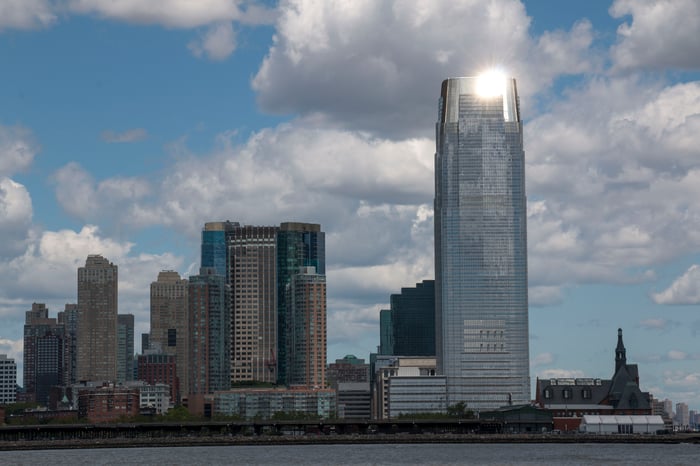 Goldman Sachs crushed the second quarter of 2019 with an earnings per share (EPS) of $5.81 over the expected $4.89 and delivered astounding revenue of $9.46 billion over an estimated $8.83 billion. Delivering results such as these is forcing analysts to question if Goldman can continue this growth, and I believe they can.

Book value per share (BVPS) is an important metric when looking at the banking industry, as it reflects the net asset value of a bank. Simply put, by removing liabilities from assets and then dividing by the total number of shares, you arrive at the BVPS. This is not the only factor to consider when looking at a company such as Goldman, but it can deliver a strong indicator in concern to share valuation. 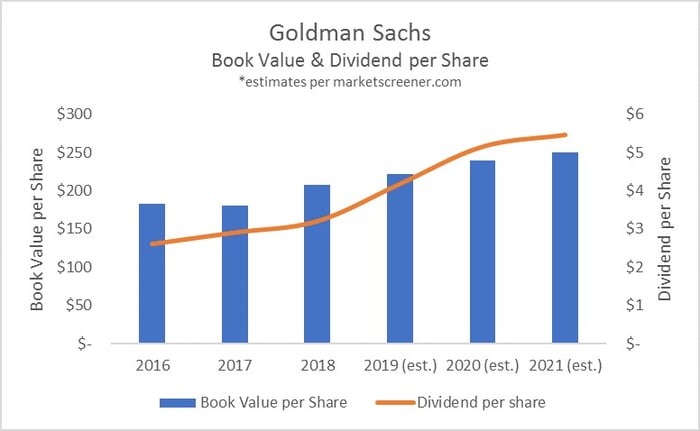 Analysts are expecting the BVPS to grow 7% from 2018 to 2019 and 8% from 2019 to 2020 with a consistent dividend increase at the same growth rates. Maintaining growth in the financial sector is taking additional effort in the current economic climate, but if Goldman can keep pace with expectations and maintain consistency with the current business structure, investors will gain additional value.

The rising star segment within Goldman is investing and lending, with an increase of 38% from the first quarter of 2019. A stand out within this segment is the newly founded Marcus, the company's transition into consumer financial services, which has the potential to take the company into new territory, one that JPMorgan Chase has been a leader in for quite some time.

This is new for Goldman, which can be positive because the investment bank hasn't had any activity in lending or retail banking until now. The build of the digital platform using risk controls is newly founded, and not reliant upon an old retail system. This will allow for quick scalability into the market at a lower cost over competitors.

Goldman recently partnered with Apple and MasterCard to issue a credit card. This credit card is different from the rest of the pack, foregoing fees that other cards are charging. Apple is the perfect partner to launch this credit card due to the reach Apple maintains with a U.S. customer base of 100 million and a global base of 588 million per a Credit Suisse report in 2018. The credit card may be the launch Marcus needs to reach further into the market, issuing additional credit cards and expanding the consumer finance arm.

The newly appointed CEO, David Solomon, has been shaking up Goldman Sachs. As the bank has been lagging behind rivals such as JPMorgan Chase, Solomon has undertaken expense initiatives and set financial targets for longtime managers to meet.

Goldman has operated as a partnership from the beginning, which means partners in the firm were risking their own money to back it. When Goldman went public in 1999, the partner arrangement ended, however, there are currently 500 partners on the books, some receiving $1 million or more in compensation annually. With the recent shakeups by Solomon, it has been estimated that 15% of the 500 partners are expected to exit the company by year-end, slowly removing the "old guard" and bringing in new blood. Investors are anxious to see if the culture changes will lead to additional value. The results of these changes are set to be released during the first quarter of 2020.

There are several new initiatives that concern the future of Goldman Sachs, however, the company's foundation is strong. The venture into consumer finance is expected to increase revenue and cash flow ultimately increasing share value. Assuming Goldman maintains strength in earnings, grows the Marcus platform, and successfully improves the company culture, Goldman Sachs has the potential to contend with JPMorgan's market share.