For many years, GPS device maker, Garmin (GRMN -1.78%) built up its business offering consumers personal navigation devices. But years of strong sales growth in that market hit a wall when GPS technology became ubiquitous in smartphones and integrated automotive systems.

Many investors counted the company out, as the stock fell from a high of $120 per share to just $15 during the depths of the Great Recession. However, the company continued pouring money into research and development, and it has evolved into a cash-generating machine with growing sales and earnings despite the continued contraction of its large automotive business. Let's look at the path Garmin took to regain its footing and the company's growth prospects going forward. 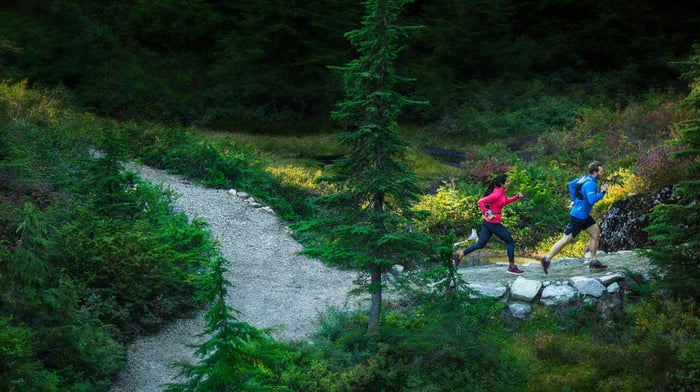 Growing with the outdoor lifestyle

Garmin used its brand and technology advantages to focus on other segments where its devices managed to resonate with consumers, especially in the outdoor recreational market. Below are the segment revenue growth rates for the past three years:

The strong growth in these segments comes from different end user markets. For example, fitness has seen strength as the company enhances its smartwatches with new features for runners. Outdoor has enjoyed growing contributions from adventure watches and golf offerings, while aviation sells in both the aftermarket and OEM (original equipment manufacturer) spaces. Marine has continued to refresh its lineup of advanced sonars, chartplotters, and cartography devices. Together, the non-automotive segments have continued to drive more and more of the company's sales and expanded its profitability, as you can see below:

Data source: Garmin financial filings and S&P Capital IQ. Pro forma earnings are provided for consistency as they negate the impacts of foreign currency gains or losses, as well as certain non-recurring items such as occasional tax related items.

Along with pivoting more toward the high-growth segments, management launched a strategy of acquiring many of its foreign distributors. European distributors in Denmark, Finland, Austria, Sweden and other regions were rolled up in 2008, as well as Chile and South Africa in subsequent years. Bringing distributors under the corporate umbrella helped to strengthen sales in these markets, growing global market share and bringing efficiencies and cost savings.

Garmin has also constantly moved to build consumer interest along with driving a more profitable business. When personal navigation devices were driving sales, the other niche products Garmin offered were intended for elite endurance athletes and triathletes, as well as serious campers, boaters, and pilots. Some of the Fenix and Forerunner watch series, as well as Edge cycling devices which could cost upwards of $1,000, gave way to more basic offerings for casual runners and other sports enthusiasts at more accessible price points as low as $100. Hunters, golfers, swimmers, and dog trainers joined the ranks of Garmin consumers, all while the high-end offerings maintained popularity in their niches.

Importantly, the distributor and other acquisitions, combined with the research and development required to maintain and grow market leadership were funded from cash flow, not debt. Garmin management has remained conservative through the transition when co-founder Dr. Min Kao assumed the role of executive chairman in 2012, with current President and CEO Cliff Pemble taking over.

Cash flow is very strong, and management returns much of it to shareholders through dividends and buybacks, while also growing the business debt free. A $300 million buyback program was announced in Feb. 2015 and was completed at the end of 2017. The chart below shows how free cash flow comfortably covers the dividend payout. 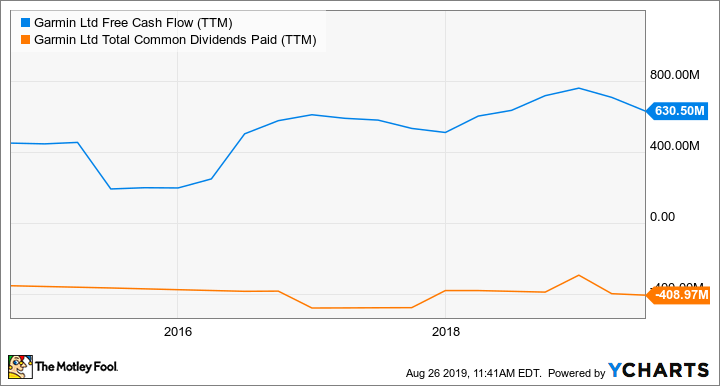 In fact, Garmin ended the most recent quarter with $1.1 billion of cash and equivalents on its balance sheet, and the dividend currently yields 2.7% as of this writing. That conservative financial mindset also presents itself in company guidance. Since 2016, management increased guidance for revenue, earnings per share, or both figures seven times, giving investors confidence as they consistently "beat and raise."

In its most recent earnings release, the company again updated its 2019 guidance expecting gross margins moving higher to 59.5% with earnings per share of $3.90. Assuming it doesn't top these estimates, the company is trading at a reasonable 2019 price to earnings multiple of about 21.9 times.

Growth into the future

In April 2019, Garmin acquired the privately held Dutch company TacX, a manufacturer of indoor bicycle trainers and equipment, as well as training software. This is yet another new sporting niche for Garmin to fill. It has unveiled a new Forerunner smartwatch series, "designed to meet the needs of all runners, no matter how far or fast they run," and recently announced that Amazon Music will be available on Garmin smartwatches.

These moves should continue to drive sales with more mainstream consumers, helping to continue the strong cash generation that has been benefiting shareholders, while maintaining a rock solid balance sheet, even with continued spending on R&D for the future. Its recent recognition by Forbes as the No. 5 best large employer in America and No. 1 employer in Kansas shows investors they have a stake in a solid organization. When you put it all together, Garmin deserves a place in a long-term investor's portfolio.