Please ensure Javascript is enabled for purposes of website accessibility
Log In Help Join The Motley Fool
Free Article Join Over 1 Million Premium Members And Get More In-Depth Stock Guidance and Research
By Adam Levine-Weinberg – Sep 16, 2019 at 9:25AM

Last week, Embraer delivered the first E195-E2 to launch operator Azul, as promised. Will this milestone be a major sales catalyst?

Last Thursday, Embraer (ERJ 8.72%) finally delivered the first E195-E2 to its launch customer, fast-growing Brazilian airline Azul (AZUL 16.34%). This was a huge milestone, because while the E195-E2 is the second of Embraer's next-generation E-Jets to enter service, it is likely to sell a lot better than either of its siblings.

Despite their impressive specifications, none of the E2-series E-Jets have garnered many orders so far. However, the entry-into-service of the E195-E2 could stimulate additional orders. An even bigger sales catalyst could kick in a few months from now, when Boeing (BA) is scheduled to take an 80% controlling stake in Embraer's commercial jet business. The first-generation E195 was the slowest-selling model, with only 172 orders over the life of the program (10% of the first-generation E-Jet order total). The E195 only had room for about three more rows of seating compared to the E190. While it was slightly more fuel efficient than the E190, in common configurations the E195 often required an extra flight attendant, offsetting the cost benefits. It also had less range and inferior takeoff performance compared to its smaller sibling.

By contrast, the E195-E2 can accommodate several more rows than its predecessor. This better differentiates it from the E190-E2. Its range has been extended from as little as 2,000 nautical miles for the E195 to 2,655 nautical miles for the E195-E2, enabling the new model to cover more long-and-thin routes. Most importantly, the new model is 25.4% more fuel efficient than the first-generation E195. 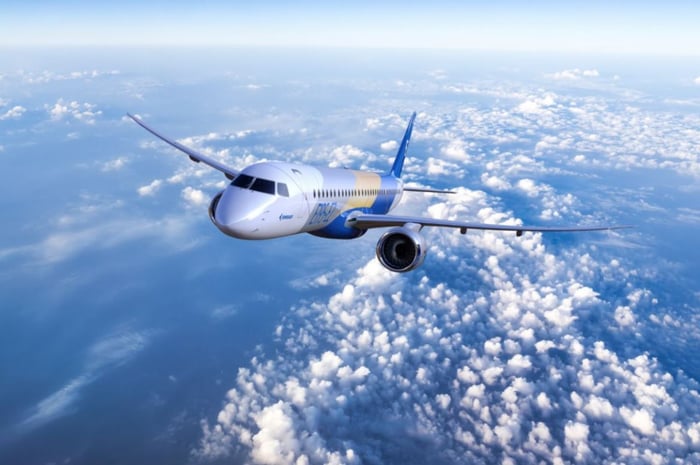 The E195-E2 will be Embraer's most fuel-efficient jet ever. Image source: Embraer.

That's a big reason why Embraer has received 124 firm orders for the E195-E2, with another deal for at least 15 E195-E2s from KLM Cityhopper waiting to be firmed up. By contrast, it only has 44 firm orders for the E190-E2. Meanwhile, the E175-E2 doesn't have a single firm order, because it exceeds the weight limits imposed on U.S. regional airlines, although Embraer commercial chief John Slattery is optimistic about getting orders outside the U.S. soon.

Azul receives the first of many E195-E2s

Azul is by far Embraer's largest customer for the E195-E2 so far. It has 51 firm orders for Embraer's latest jet and plans to lease another six. (Aircraft leasing companies account for most of Embraer's other outstanding E195-E2 orders.) Azul projects that its E195-E2 fleet will grow quickly over the next few years, reaching 41 aircraft by the end of 2022.

Azul founder and chairman David Neeleman recently noted that each E195-E2 will have 18 more seats than the E195s they will replace, while costing 15% less to operate. Thus, it's no mystery why the carrier wants to replace its existing E195s as quickly as possible. Embraer executives think Azul could eventually operate more than 100 E195-E2s.

As an existing E195 operator, upgrading to the E195-E2 makes a ton of sense for Azul. The key challenge for Slattery and his sales team is to convince airlines that don't use Embraer jets -- or have stuck to smaller models like the E190 up until now -- that the E195-E2 has a place in their fleets because of its impressive capabilities.

Will the Boeing deal accelerate sales?

Slattery sees plenty of opportunities to sell E195-E2s even before the Boeing deal closes at the end of 2019. For example, Aeromexico is looking to order up to 60 jets later this year to fortify its regional operations. The E195-E2 is one of the models it is considering, and it may have the inside track because Aeromexico's regional affiliate already operates dozens of E-Jets.

That said, Boeing's pending takeover of the E-Jet program could be the real catalyst for an uptick in sales -- just as sales of the A220 (formerly Bombardier's CSeries) took off after Airbus took control of the program. First, Boeing may be more aggressive on pricing. Its purchasing scale should allow it to reduce costs over time, enabling it to pass some savings on to customers. Moreover, the U.S. aerospace giant will probably want to get some sales momentum going quickly.

Second, Boeing has a huge global customer base and a sales force to match it. Longtime Boeing customers like United Airlines could be in the market for small mainline jets soon, and Boeing's deep relationships with these airlines could help the E195-E2 get the win.

While Embraer will only have a 20% stake in the E-Jet program going forward, that will account for a substantial proportion of the company's value after it uses the proceeds of the Boeing deal to repay much of its debt and pay a big special dividend. Thus, growth for the E2 program will benefit both Boeing and Embraer.