Please ensure Javascript is enabled for purposes of website accessibility
Log In Help Join The Motley Fool
Free Article Join Over 1 Million Premium Members And Get More In-Depth Stock Guidance and Research
By Daniel B. Kline – Sep 16, 2019 at 6:47AM

If you have kids under 18, summer probably cost you.

For kids, summer means no school and a break from responsibility. For parents, the warmer months mean added child care costs, a struggle to find things for children to do, and more pressure than they face when kids are in school.

Summer school vacation, which can be as long as three months depending on where you live, comes with a minefield of potential costs for parents. Anything from a vacation to summer camp, pool memberships, tutoring, and back-to-school purchases can bring financial pressure.

That's likely why 57% of respondents felt that summer with their kids cost them more than the holiday season did, according to a TD Ameritrade survey of 1,015 adults.  If you have younger kids, however, costs are even higher. Over half (52%) of respondents with kids under 18 said they exceeded their summer budgets, while only 34% of those with adult children did so. 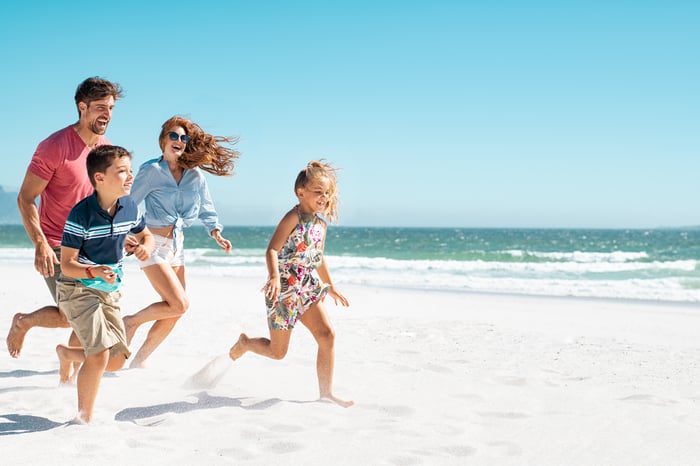 Summer vacation can be an expensive time for families with younger kids. Image source: Getty Images.

Having kids under 18 creates pressure to make summer special. That clearly costs money -- parents with children under 18 spent three times as much this summer ($1,960 vs. $563) than those with adult children.

The study found that "55% of the parents with younger children said they just wanted to treat their family/children and 23% said they felt pressure to do so compared to 3% of parents of adult children."

And the costs weren't limited to parents' wallets. Over half (56%) of respondents with kids under 18 said that they had to take time off to take care of their kids. That was somewhat offset by the 48% who reported that they worked extra hours this summer to pay for expenses incurred with their kids over the school break. About 2-in-10 (22%) even said they took on part-time jobs to cover the expenses, and parents of kids under 18 were three times more likely to have a second job compared to those with adult kids, according to the survey.

While it's still technically summer, most kids have gone back to school. Summer camps have closed up, vacation spots are entering a slower season, and parents of kids under 18 get the small relief that comes from their children being in school for much of the day.

Of course, the school year has its own expenses -- after-school care, sports, transportation, and school supplies, to name a few. Still, in many cases, back-to-school means spending less money, and that's the perfect time to plan for next year.

Parents should look at the entire year and make a budget. This should involve getting input from kids who are old enough to help. For example, a week of specialty summer camp may be given as a holiday gift, or children may need to understand that taking a winter trip means not taking one in the summer.

It's also important to act early. Some summer camps offer payment plans, or even lower prices for committing early. Know what your budget is and work to manage your expenses accordingly.

Winter is coming, and that means the holidays, but warm weather and school vacations are going to be here again sooner than you think. Plan ahead and you'll have less stress, whether you have younger kids or young adults with whom you hope to maximize the last summers they live under your roof.