The chain is going through captains like Spinal Tap goes through drummers.

The corner office apparently has a revolving door at SeaWorld Entertainment (SEAS 8.21%). Former Carnival (CCL 12.44%) executive Gus Antorcha stepped down as CEO on Monday, citing disagreements with the theme park operator's board of directors. He lasted less than seven months. If his permanent replacement is tapped before mid-February 2020, that person will become SeaWorld's fifth CEO in two years.

There will be no protestors picketing in front of SeaWorld's parks and taking shots at it on social media to challenge the company for its poor treatment of its CEOs. There will be no scintillating documentary detailing how corporate captains shouldn't be held in captivity in what are apparently tiny think tanks. However, there's clearly a disconnect between SeaWorld's boardroom and the folks who are tasked with running the show at the country's third-largest theme park operator. 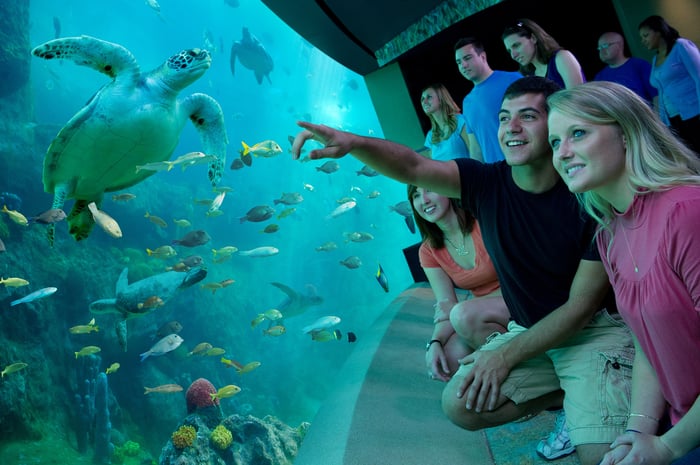 SeaWorld Entertainment is going through CEOs the way Spinal Tap went through drummers, and the stock opened lower on Tuesday in response to Antorcha's resignation. It's now on its fourth CEO in the last 19 months, and while two of them have been insiders with the "interim" tag slapped on their nameplates -- the new interim leader is CFO Marc Swanson -- the real shock here is that the stock has been a big market winner through all of the calamity. The stock has more than doubled since the start of last year and is up 91% since the day former CEO Joel Manby triggered the first of these falling dominoes on Feb. 27, 2018.

It remains to be seen what the disagreements between Antorcha and the boardroom were, and we may never know. It's probably not a coincidence that Antorcha's departure was announced hours after news broke that Orlando-based SeaWorld Entertainment had closed down its local call center, shipping those jobs overseas.

The boardroom seems to be a tough crowd to please as SeaWorld Entertainment transforms itself into a more ride-based-attractions operator and away from controversial marine life exhibits and showcases. Attendance continues to move higher -- no small feat given how even the industry leader slipped in its latest quarter.

It's hard to argue with SeaWorld's strategy of relying on foodie and boozy festivals to woo adult locals while bulking up on world-class roller coasters to give younger adrenaline junkies a thrill-ride fix. The results have been strong, and the shares hit six-year highs this summer.

The problem might still be with the board if it can't find a CEO solution that will stick. The last thing that SeaWorld Entertainment needs is to become the executive equivalent of a selfie wall, one where a flurry of CEOs take a shot and move on. Eventually it will become impossible to attract serious candidates if they know that they don't have the wiggle room to play out the visions they were hired to deliver. SeaWorld's next big fish better be its last -- or else Blackfish will become Lack Fish.