Please ensure Javascript is enabled for purposes of website accessibility
Log In Help Join The Motley Fool
Free Article Join Over 1 Million Premium Members And Get More In-Depth Stock Guidance and Research
By Brian Feroldi – Sep 17, 2019 at 6:19AM

The tradespeople-focused retailer is struggling. Is there any hope for investors?

It has been a rough year for Duluth Holdings (DLTH -0.14%). Shares of this retailer have declined by over 60% year to date after the company produced several disappointing earnings reports, and its leader suddenly resigned.

Unfortunately, the story took a turn for the worse in the company's fiscal second quarter. Sales growth continued to slow, gross margin took another step backward, and its net income nearly evaporated. To top it all off, management said that it was going to slow its pace of new store openings and cut its full-year guidance. 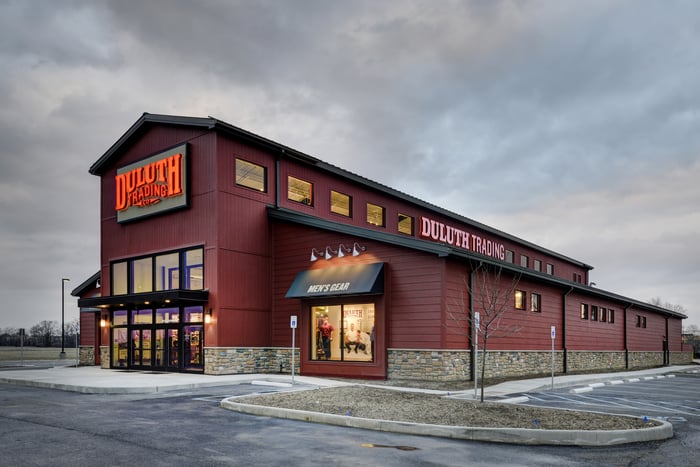 Schlecht acknowledged that 2019 has been a difficult year for Duluth:

We know that our performance in the first half of this fiscal year fell below our expectations and that now all our attention and resources must be completely focused on delivering a successful fourth quarter, which accounts for the lion's share of our sales and profitability for the entire year. I also want to recognize that we have had some growing pains over the past year and a half. In response, we plan to slow down the pace of our retail expansion in 2020 and direct our focus to improving asset productivity and thus our operating margin rate. We have made a number of improvements in our business that are expected to bear fruit in 2020, and we have a strong team in place focused on the long-term success of our company.

On the earnings conference call, CFO Dave Loretta put some context around the company's plan to slow down on new store openings:

We plan to continue opening stores in new markets, but we'll likely plan for expanding square footage by 30% to 40% less than we have over the last few years. We expect the capital deployed for systems and infrastructure will also moderate, as much of the foundational investments needed to scale and support our growing omnichannel business are now in place.

Check out the latest earnings call transcript for Duluth Holdings.

The downbeat quarterly performance caused management to pull back on its full-year guidance:

For context, Wall Street was expecting Duluth to haul in $648 million in revenue and earnings of $0.70 per share for the full year, so the midpoint of this new guidance is well below the consensus estimate. When combined with the soft quarterly results, it's understandable why shares dropped by double digits after the earnings were released.

CFO Loretta knew that this news wasn't going to sit well with the market, so he did his best to project optimism about the future, saying, "We expect the second half of 2019 to be our turning point on growing operating margins and delivering the growth in bottom-line results we've been planning for and investing in."

It isn't easy to find reasons to share Loretta's optimism after digging into this earnings report. Sales growth has slowed considerably. Management is leaning on promotional activities and markdowns to move inventory, which is hurting margins. Full-year guidance was slashed, and new store openings are going to slow. The surprise CEO departure just makes the situation that much worse.

It wasn't all that long ago that I believed that Duluth Holdings could be a wonderful growth stock. However, the long-term thesis for owning this company has taken a serious step back. While shares might be a bargain today -- the stock is trading at just 14 times forward earnings estimates -- I find it hard to get excited about becoming a shareholder when there is so much going wrong. My plan is to root for a successful turnaround from the safety of the sidelines and focus my attention on more promising businesses.