Please ensure Javascript is enabled for purposes of website accessibility
Log In Help Join The Motley Fool
Free Article Join Over 1 Million Premium Members And Get More In-Depth Stock Guidance and Research
By Steve Symington - Updated Sep 18, 2019 at 8:12AM

When Corning (GLW -1.58%) released second-quarter 2019 results in late July, shares of the glass technologist fell as investors weighed the underwhelming performance of its largest segment, optical communications, against the relative strength of its four other segments, display technologies (its second largest), environmental technologies, life sciences, and specialty materials.

After all, the company not only confirmed that its optical sales arrived near the low end of its own guidance for Q2, but -- due to weakness in the carrier market -- it also modestly reduced the segment's outlook to call for full-year growth in the low- to mid-single-digit percentages (down from its previous guidance for 10% growth).

But, it turns out, even that recently lowered target was far too optimistic.

On Tuesday, shares of Corning fell more than 6% after the company issued a preliminary update on its third-quarter performance ahead of its official release on Oct. 29. It reiterated guidance for its three smaller segments, but significantly reduced expectations for both its optical communications and display technologies businesses.

Corning now sees third-quarter optical communications sales falling by low-teens percentages, versus its old target for a low-single-digit decline. As such, it now expects optical communications sales to decline 3% to 5% for all of 2019. Primarily to blame, according to the company, is reduced spending from "some enterprise customers" and a continuation of the aforementioned carrier weakness. 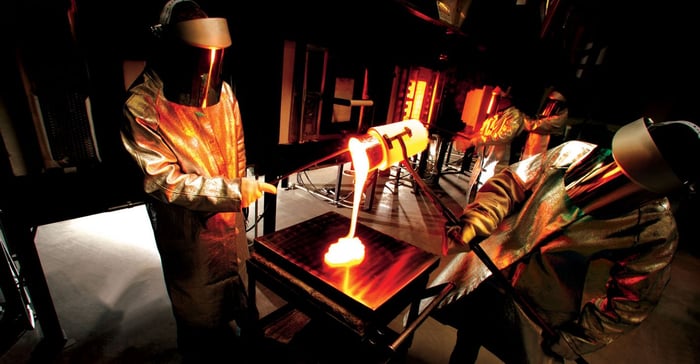 As for display technologies, Corning says that display-glass price declines are moderating as expected, and TV viewing area is still growing along with retail demand. But several key display-panel manufacturers have also reduced their utilization this quarter, as TV set makers "are purchasing panels more conservatively, apparently due to macro uncertainty ... ."

As such, Corning now expects volume in the display technologies segment to decline sequentially this quarter in the high single digits from Q2 (versus previous guidance for a low-single-digit sequential decline). That should lead to only slight growth in display technologies volume for the full year of 2019, marking another big reduction from its prior target for high-single-digit growth.

Corning was also quick to point out that its display segment volume growth is still expected to outperform that of the overall display glass market, helped by the recent ramp-up of its latest Gen 10.5 manufacturing capacity. It also insisted that the adjustments in the display supply chain that it's seeing should only last through the second half of 2019, before utilization returns to sequential growth again in the first half of 2020.

In the meantime, management is taking action to cut costs in tandem with its new outlook, including operating-expense reductions, slowing the pace of planned capital investments, and adjusting manufacturing capacity in both the display technologies and optical communications businesses.

All told, investors can take some solace in knowing that Corning can demonstrate such agility even operating at enormous scale. But considering this downward guidance revision, I suspect the stock will remain under pressure until its two largest segments show signs of returning to sustained, profitable growth.